With the below, I will introduce another rare mid-18th century cannon of which–to my knowledge–very little information so far has ever been published, not to mention anyone has published an image of its general design and dimensions. 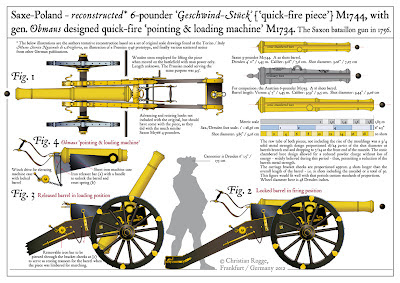 Original Saxon source could not be found, unfortunately. Instead, a set of original scale drawings can be found at the Torino / Italy Museo Storico Nazionale di Artiglieria illustrating a piece called ‘Canone alla Sassone’. The museum also has a scale model. All is dated approx. 1755. An original Sardinian–Piemontese 1757 cast 3–pounder barrel with near similar dimensions as my illustrated Saxon 3–pounder barrel is on display at the Vienna Heeresgeschichtliches Museum (HGM). The museum labels it as a 4-pounder. Its caliber is 77 mm. Shot diameter should have been approx. 72 mm, which clearly makes it a 3-pounder to my understanding. The barrel has a length of 1,44 m. This barrels mouldings in particular the muzzle design matches those of the scale model at the Torino museum but doesn’t match those of the scale drawings. Also the scale drawings carriage bears some deviations to the design of the model. I believe those scale drawings to be a copy of the original Saxon piece that served as master for the Piemontese pieces fielded till 1796.
Next to this, there exists also an illustration of a Prussian prototype 3-pounder cast and assembled with its carriage in Berlin 1746 by the Saxon-Polish major Oettner (found in Gohlke, Geschichte der gesamten Feuerwaffen bis 1850, Leipzig 1911). The piece was tested but failed to attract the kings’ interest. Its illustrated barrel looks near similar to the Torino drawings. It also comes with the general Obmaus designed ‘Richt- und Lademaschine’ [Engl: ‘pointing & loading machine’]. Franz Karl Obmaus – elsewhere also Obenaus – was a Saxon-Polish lieutenant general †1735.
From other mostly scattered German language notice we know the Saxon M1744 3- and 6-pounder pieces were designed 20 shots or calibers long, had a conic chambered bore, and a weight of 380 and 530 pounds (180 and 250 kg), which makes them rather light. The barrel length/weight ratio implies they must have been proportioned with reduced metal strength. This detail makes a very good match to the Torino museum scale drawings which present a 20 calibers barrel with a conic chambered bore and  3/4 solid metal strength barrel walls (18/24 descending to 7/24 partes at the front of the muzzle). This makes for its rather slim silhouette compared to the much shorter, but heavier Austrian 6-pounder M1753 weighing up to 800 Vienna pounds (414-440 kg).
This Saxon cannon belongs to the class of the so entitled Einfallendes Geschütz [Engl. lit. ‘dropping cannon’]. This entitlement derives from this guns alternate method of loading, as well as laying it anew. For loading the piece when engaged in quick-firing canister, the gunner would place the ready cartridge round into the muzzle, and with the special design of the Obmaus ‘pointing & loading machine’ replacing the wedges and centre transoms of the carriage, the barrel would be unlocked from its horizontal position and drop down rearwards till it was stopped dead by the axletree. With the illustrated carriage design approx 65° position. The round would now place itself automatically without the need to employ a rammer. Thereafter the barrel was pulled upwards and latched into its previous horizontal position by means of a T-handle with a rope fixed at the barrel’s rear and the gun was ready for the next discharge.
Prussian sourced notice tells us the guns could fire at a rate matching ‘the rang of the church bell’ (see Gohlke, Geschichte der gesamten Feuerwaffen bis 1850, Leipzig 1911). However, the idea behind it was more for safety concerns rather then a further increase of the rate of fire. The term Geschwindstück [lit. ‘quick-fire piece’] alludes to a bataillon gun and its employment for quick or rapid canister fire under close range fire conditions first introduced by the Swedes sometime between 1700 and 1710, to my understanding. Conventional methods of loading bore the lethal risk of the new round accidently going off while ramming the charge down the barrel. For this reason, the crooked rammer was introduced which allowed the cannonier to ram home the cartridge while placed outside the firing line. In case the round did go off he would now only forfeit his rammer rather than his life. Apparently, this sort of unintended ignition happened all too often, which must have made some unknown Saxon philanthropist invent the concept of the ‘dropping barrel’ for loading.

The design is indeed said to be a Saxon invention. The date of first introduction could not be ascertained. By 1728 light 2-pounders were fielded. This we know because in that year king Augustus the Strong made a pair of these guns a present to the king of Prussia. It was the forerunner of the 1734 introduced 3-pounders fielded with the Obmaus machinery. The M1734 pieces had barrels with a length of 21 calibers or shot diameters. From a Prussian sourced paper on ammunition transport we also know the Saxon Geschwindstücke were drawn with limbers containing an ammunition box (German: Kastenprotze – see Archiv für die Officiere der Königlich Preußischen Artillerie und dem Ingenieur-Korps, vol. 11, Berlin 1840). It must have been among the first pieces with this new concept of ammunition transport.
The Saxon ‘Quick-Firers’ first test in battle seems to have been a rearguard action known as the Combat of Radojovaz, Serbia, 28 Sept. 1737. The relation of the army’s commanding Feldmarschall Khevenhüller notes it was the Saxon Geschindstücke in particular,  that decided the action for the Imperials because of their sustained rapid [canister]-fire which had such devastate effect against the densely packed Ottoman hordes attacking and bent on capturing the Imperial army’s grand baggage (found in Streufflers Oesterreichische militätische Zeitschrift, vol. III, Vienna 1828, p. 347.) The same pieces were also fielded during the First Silesian War with the campaigns of 1741 and 1742. In 1744 new pieces were introduced with only 20 shots length. Now also a 6-pounder Geschindstück was designed. This is the piece I have reconstructed with my above illustrations. As the Prussian records of captured pieces imply, 3-pounders only were fielded in the battles of Hohenfriedberg, (4 June 1745), and Soor (30 Sept. 1745). With the battle of Kesseldorf (15 Dec. 1745) also the 6-pounders were fielded. With this battle the Prussians had a taste of their performance. A good number of 6-pounders along with heavy battery guns were deployed around the village of Kesseldorf, the objective of the Prussian right wing attack. The initial attack was repulsed because of the defenders murderous canister fire, it is noted. It was the mindless counter-attack of the defending Saxon grenadiers that gave the Prussians a chance for a second try. Also the attack of the Prussian left onto the Saxon held high grounds nearly ended in defeat once more because of the very deadly Saxon artillery fire.
By 1756, a total of 50 6-pounders were found with the Saxon army in its entrenched camp of Pirna. All fell into Prussian hands with the Saxon surrender. A total of 46 was found undamaged and these pieces were issued to the Saxon infantry regiments that were now incorporated into the Prussian army. It seems, too many of the original Saxon cannoniers preferred to leave Prussian service to enlist with the newly formed Saxon army in Hungary so that by the start of the 1757 campaign no gunners were found that knew how to serve the Quick-Firers. From Prussian source we know these pieces never took to the field, the former Saxon bataillons were equipped with Prussian 3-pounders instead.
To complete this article, I guess, one more word should be added to answer the question, likely to be raised - why did this apparently innovative and effective weapon not find wider introduction?
We know, this type of cannon was fielded only by Saxony and the Kingdom of Sardinia-Piemonte for any longer period. Also the Spanish National Archives have a scale drawing, dated 1760, illustrating a carriage of a much similar piece. As per its descriptions it was fielded by the Neapolitan army then. The entire construction was certainly more costly then a cannon fielded with the ordinary design. This may have been the reason why the large military powers of Europe rejected it. The fact that it was introduced in Saxony and Piemonte, two of Europes' most affluent countries, and both with only a smallish army would support this suggestion. In technical terms, it was said the machinery had the disadvantage that any light damage to the machinery suffered in action would disable the piece.
Posted by My 7YW at 09:15