Here are my mounted French units. 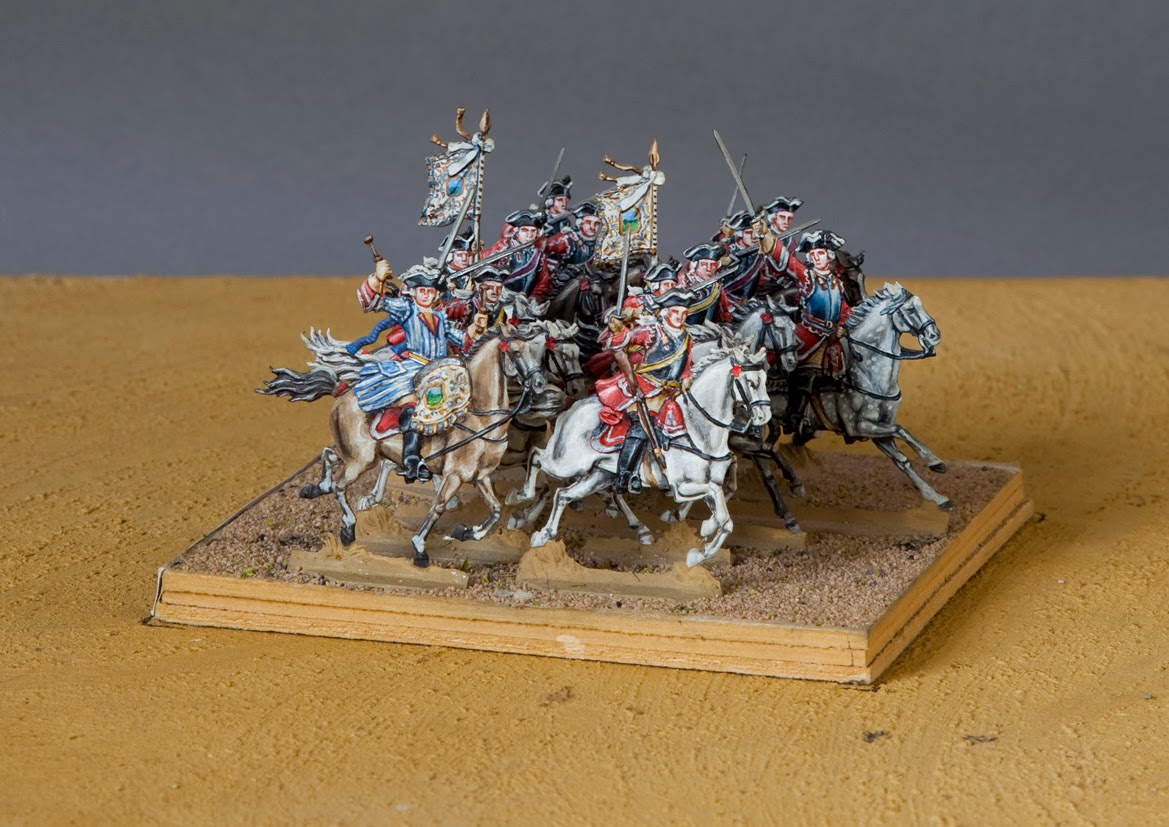 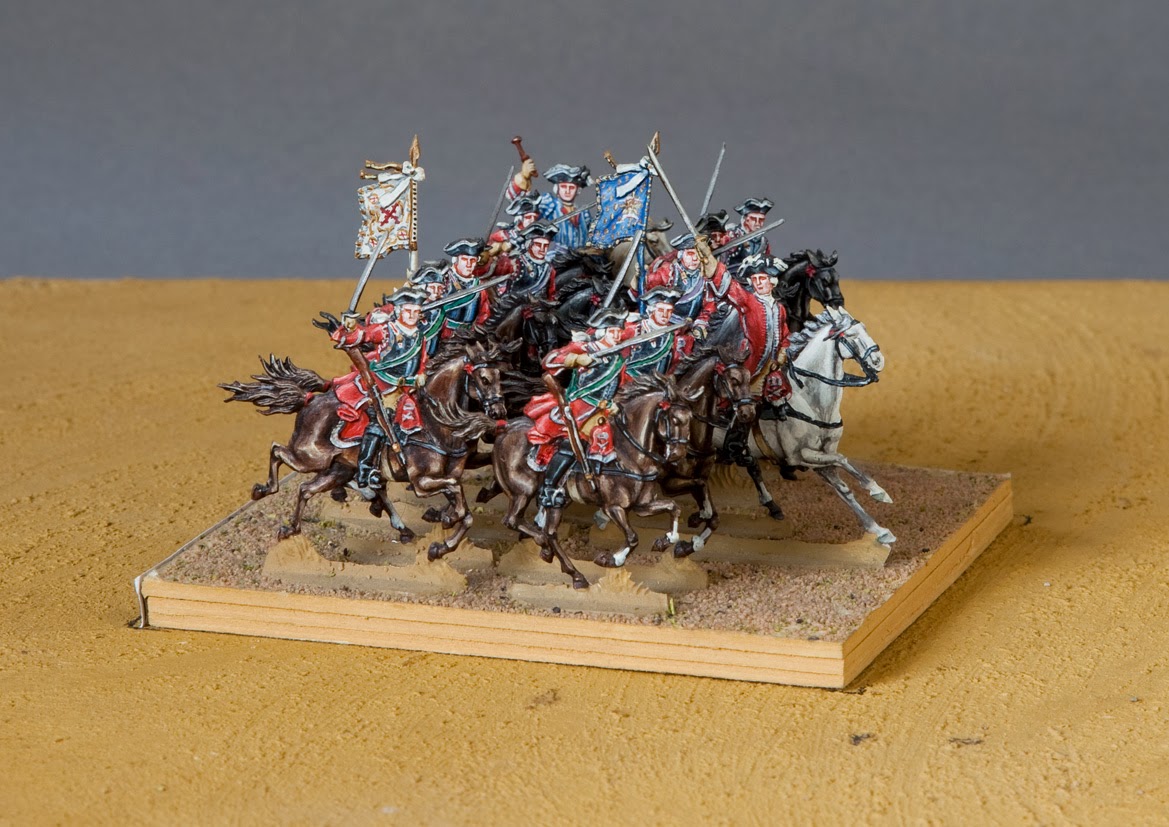 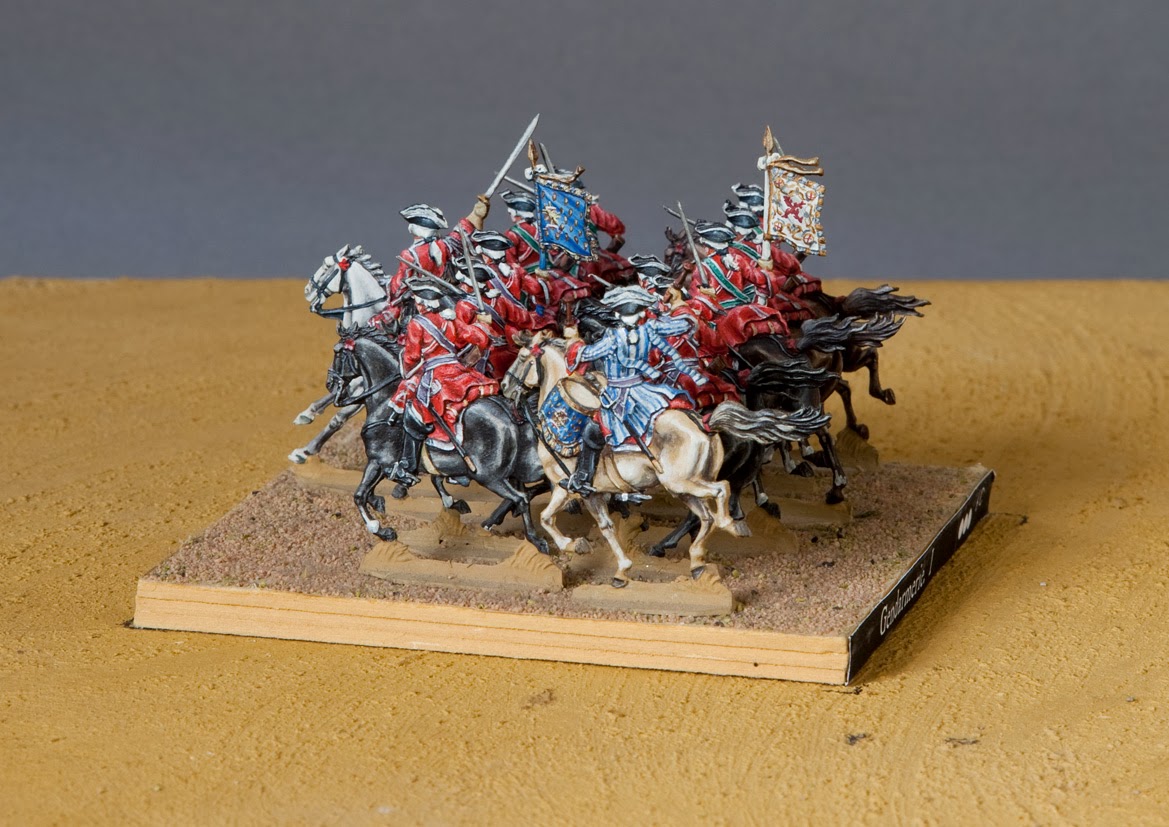 Voilà. Mon corps d'élite de la Gendarmerie de France. The figures are really belonging to a series of WSS French cavalry, but their dress matches with that of around 1745, as well. Their motions are so fantastic, that I decided to make them my SYW Corps, despite objections from among odd purists. They are missing the turn-backs and come with a blackened demi-cuirasse or breast-plate worn on top the coat. Note the officer with his complete cuirasse with the first image. This unit is among my favourites - clearly. No doubt. The miniatures are by Ochel, Kiel. 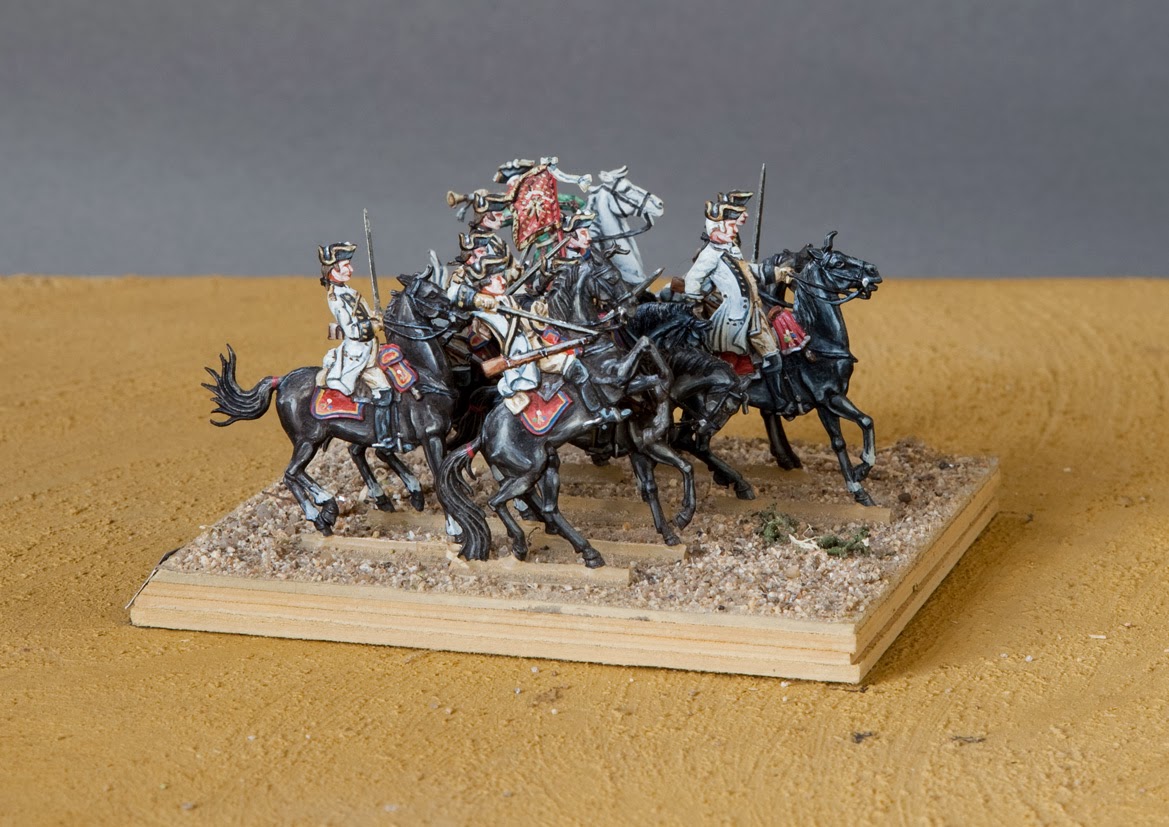 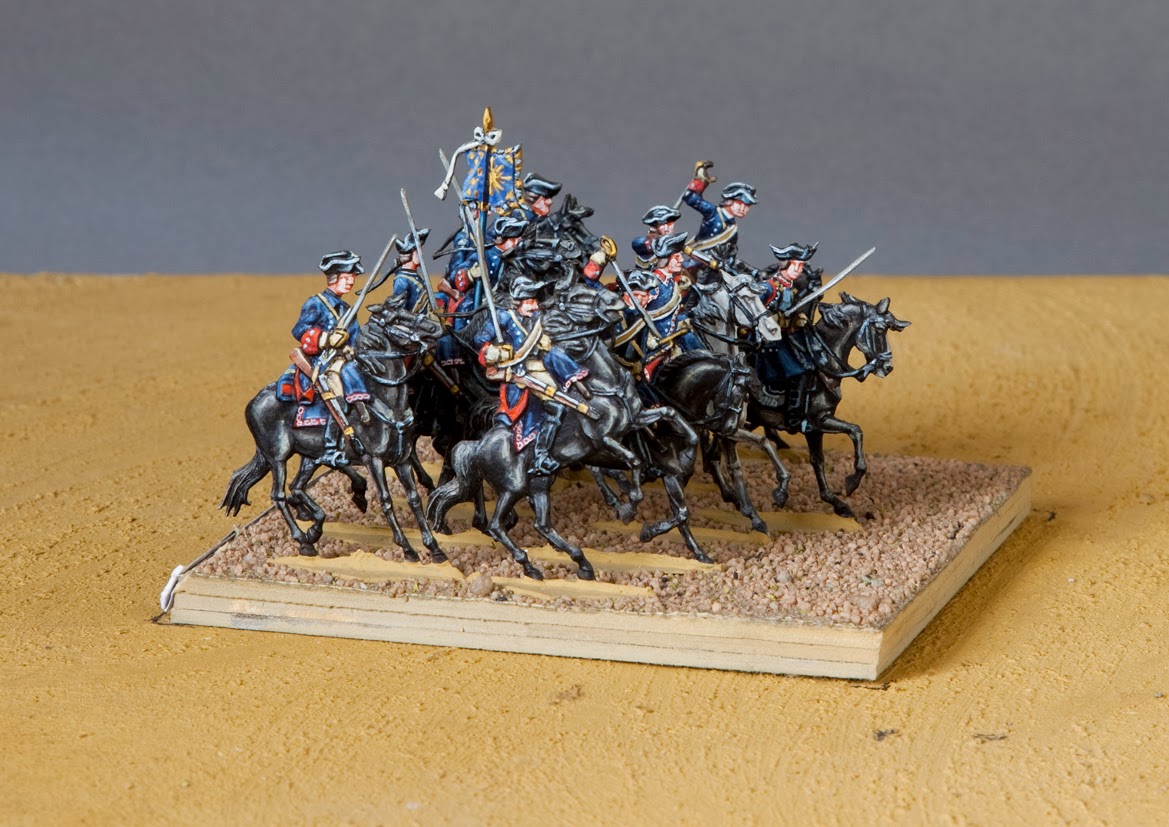 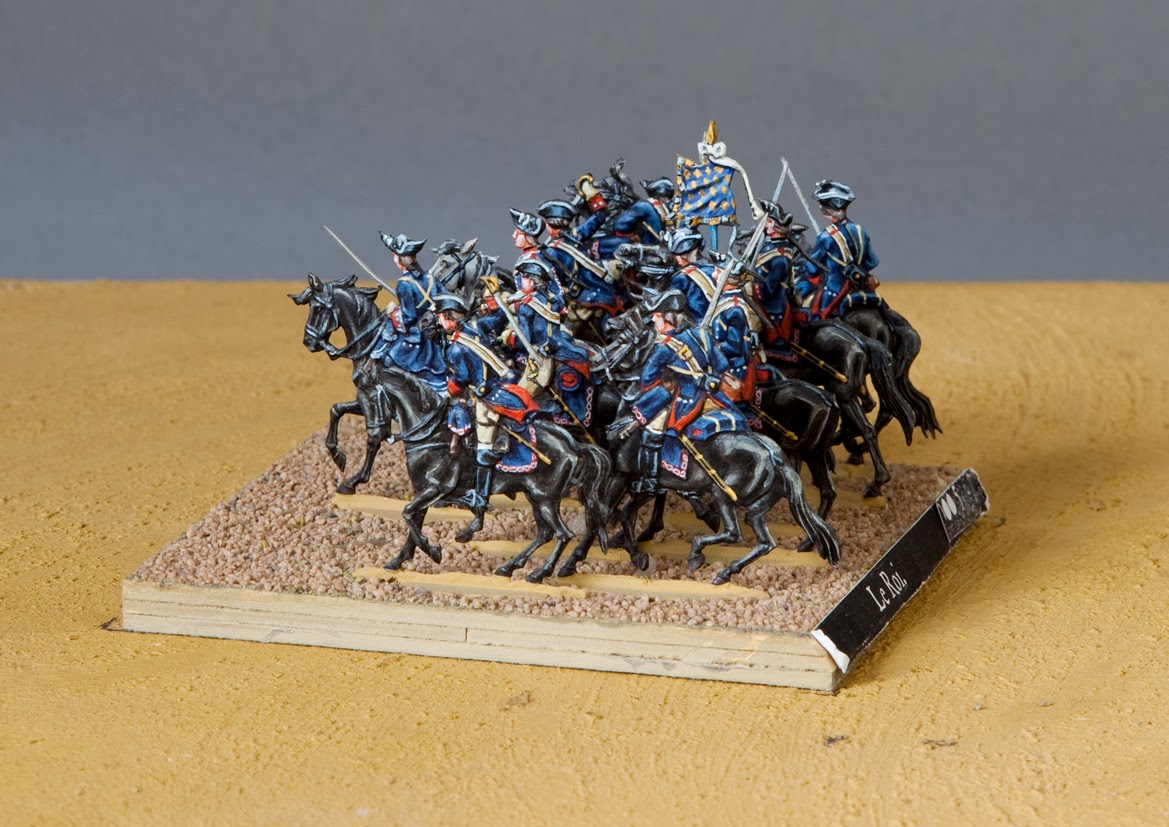 Du Roi Cavalerie. Miniatures are former Neckel, now available at Berliner Zinnfiguren. This is a particulary nice set of figures. I believe they are designed by Friedrich Schirmer. 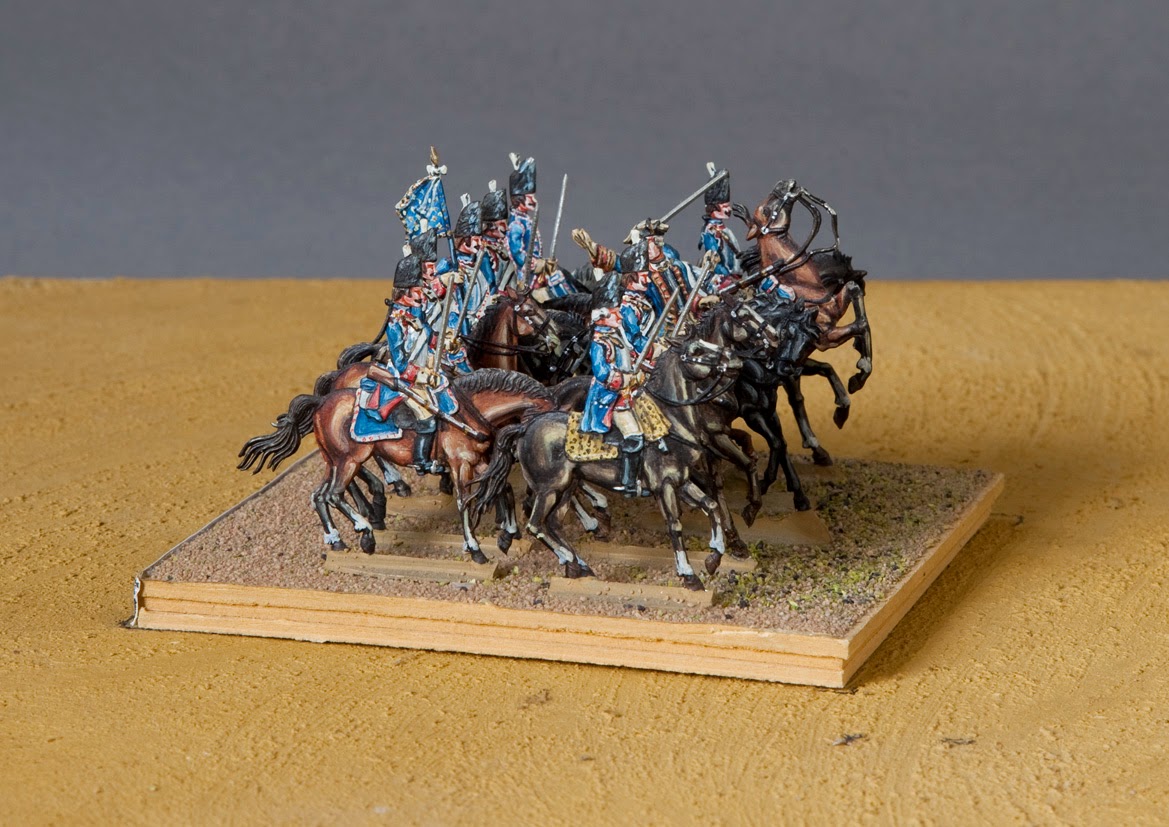 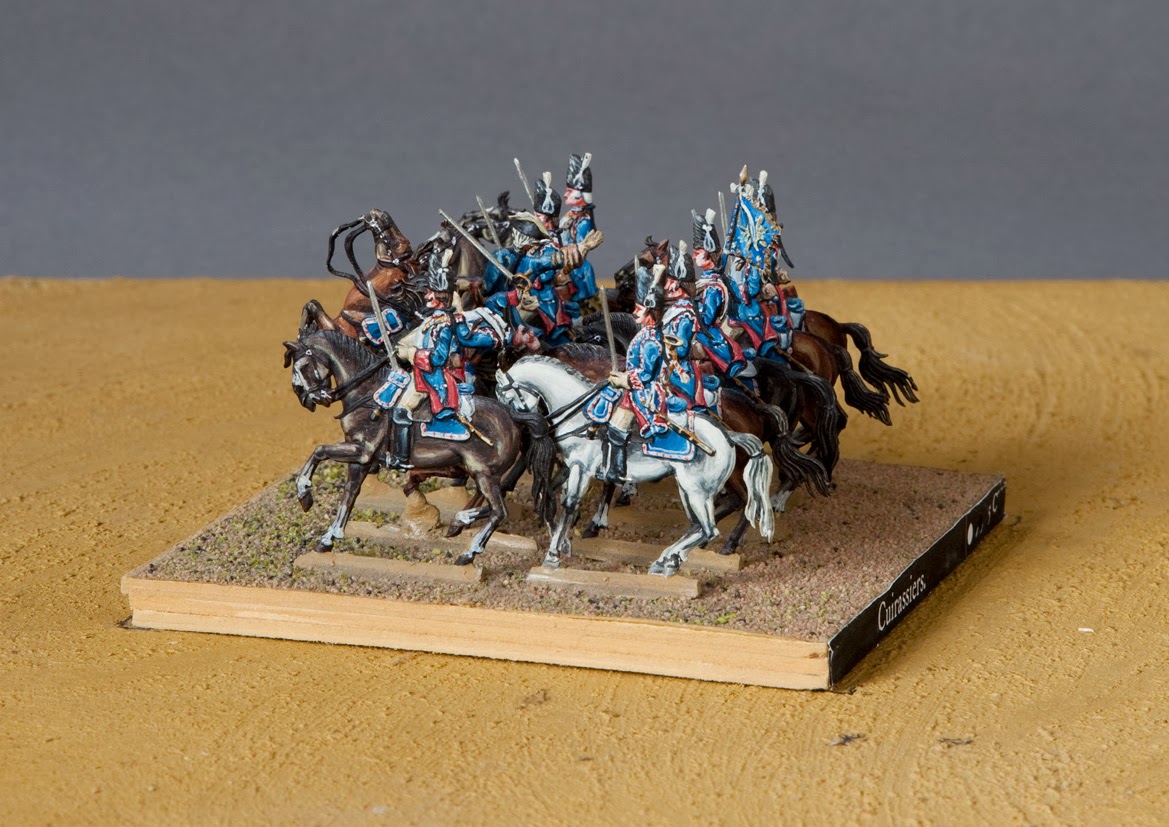 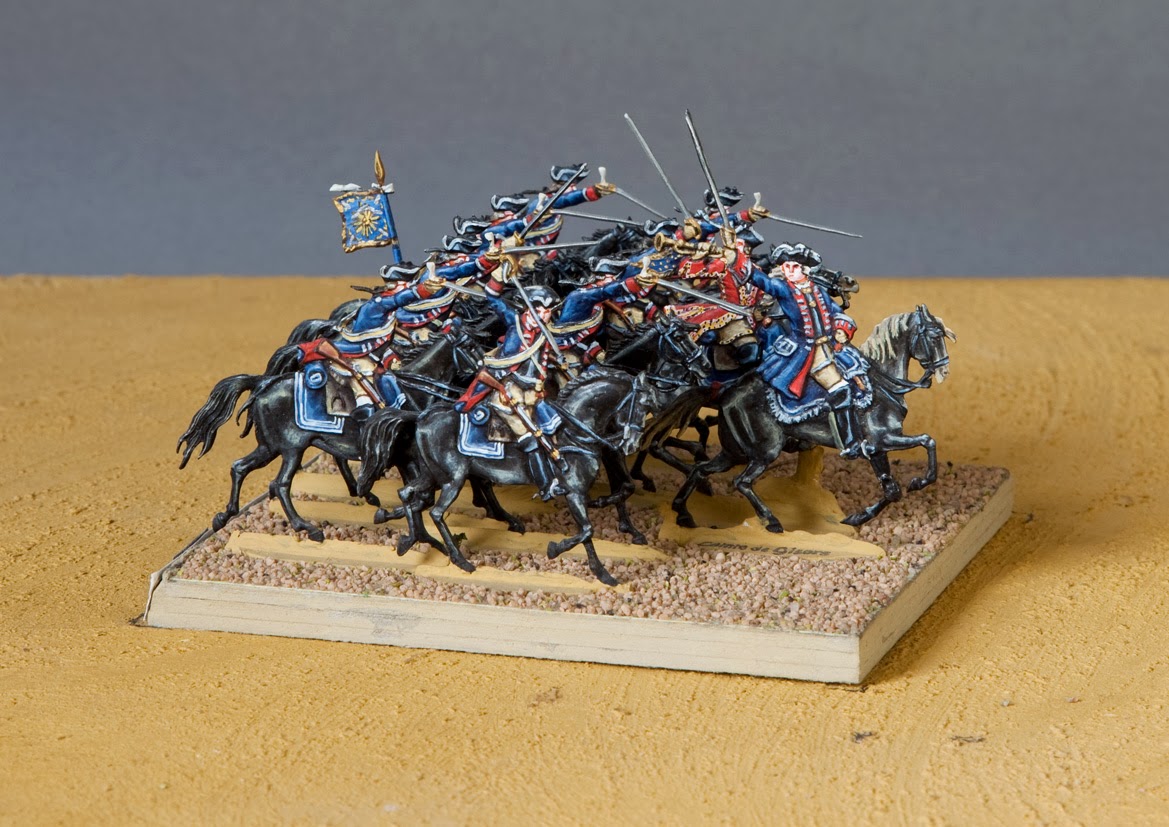 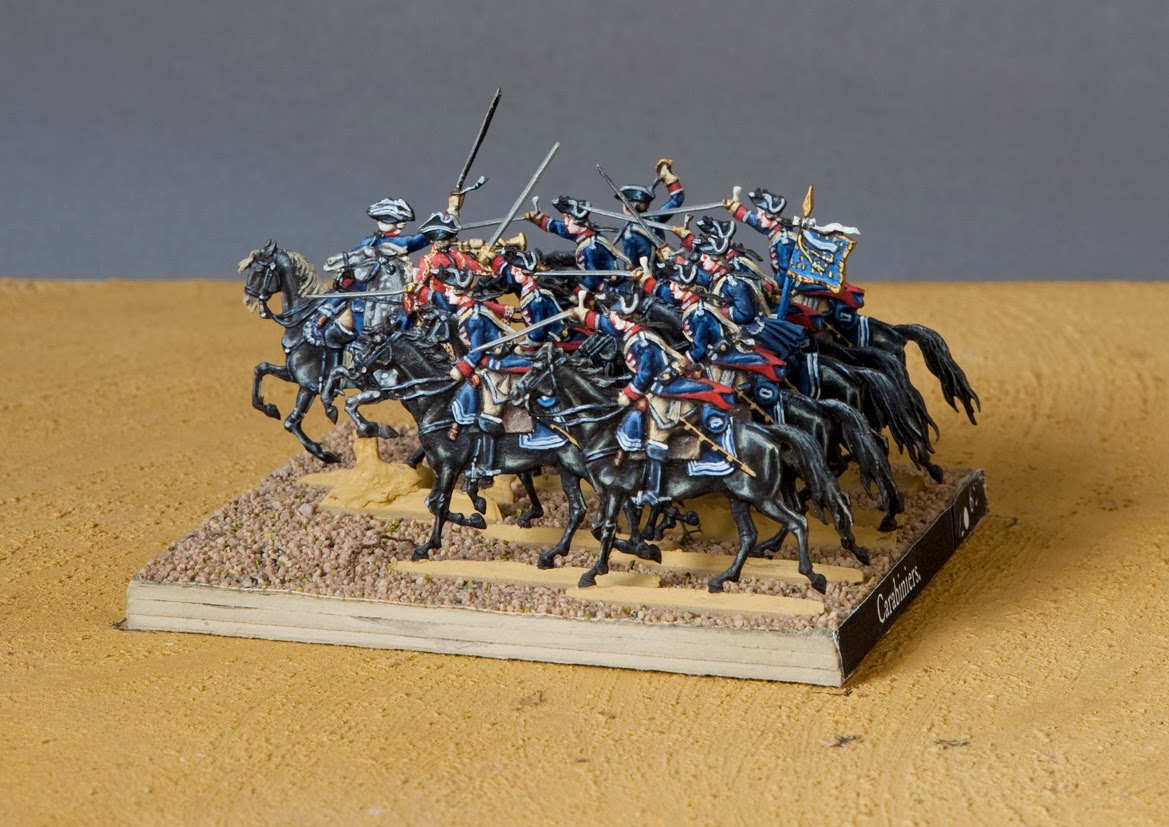 Corps d'élite des Carabiniers. (Ochel, except for the officier who I chose to represent the gallant comte de Gisors himself at the head of his unit at the battle of Krefeld, 1758, the minute before he got shot dead.) 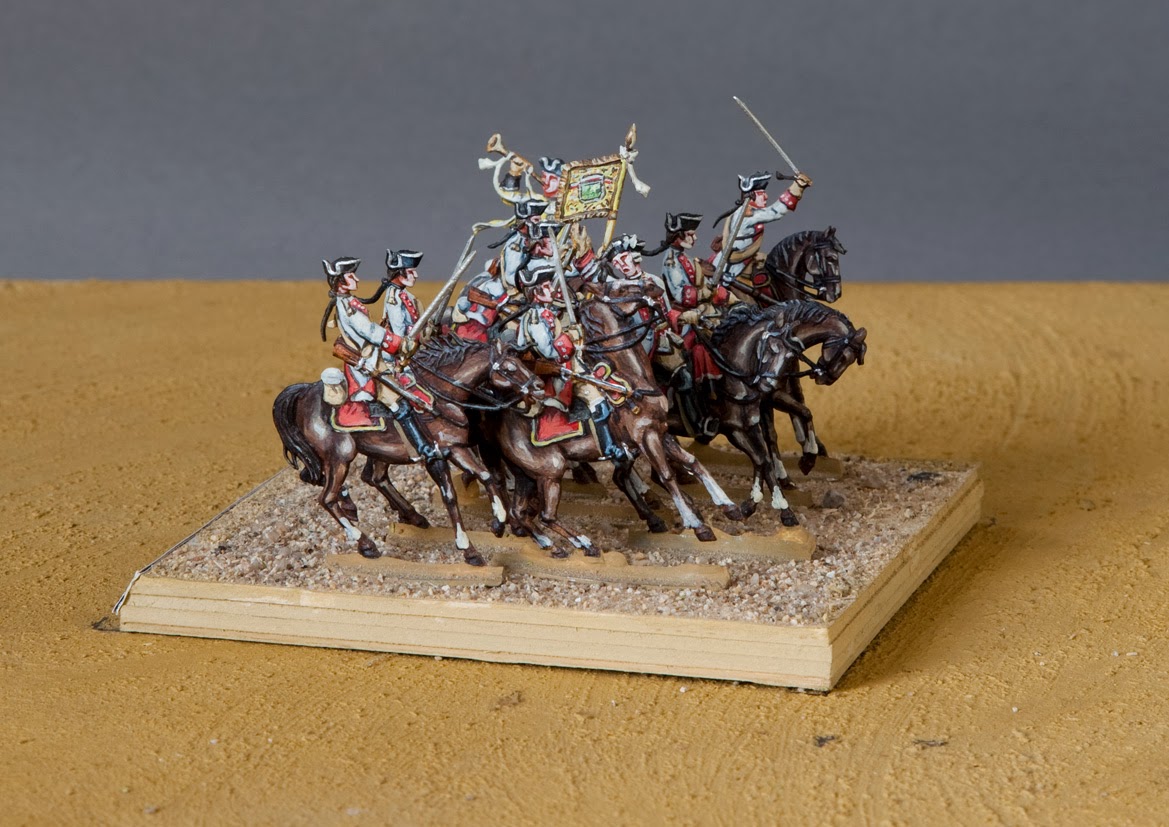 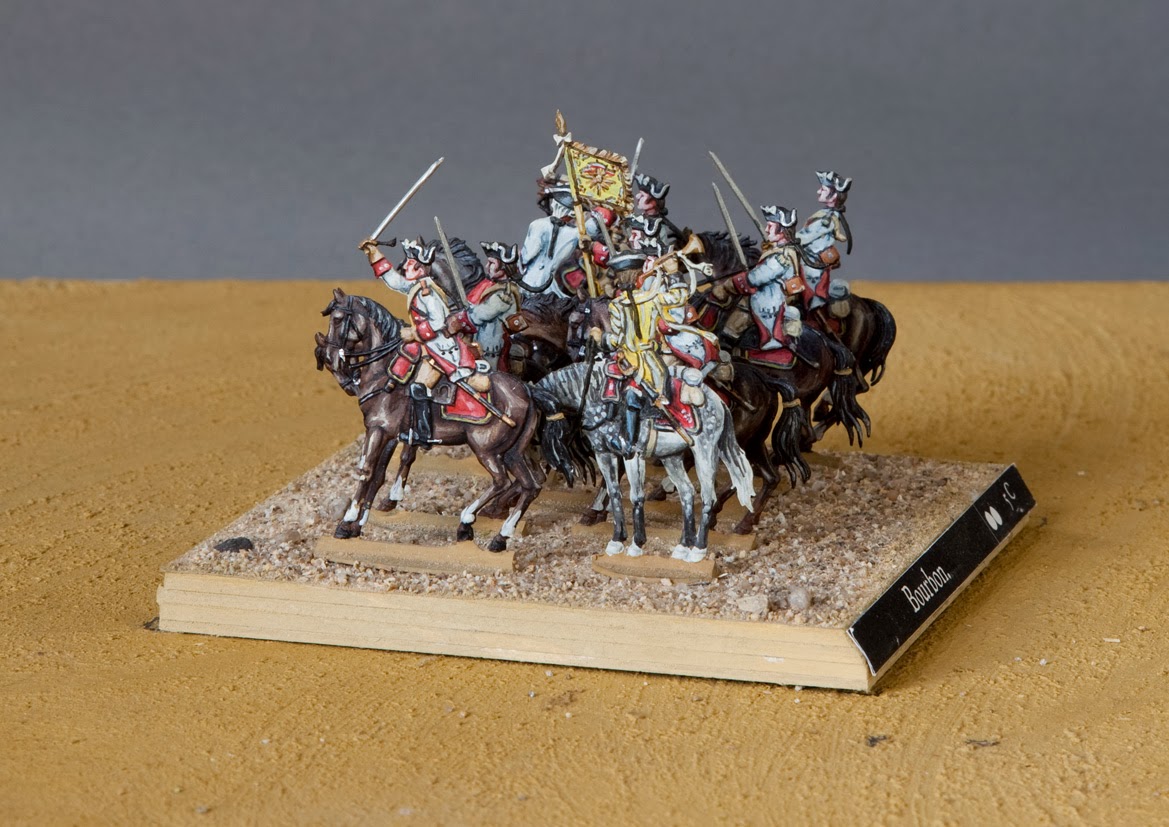 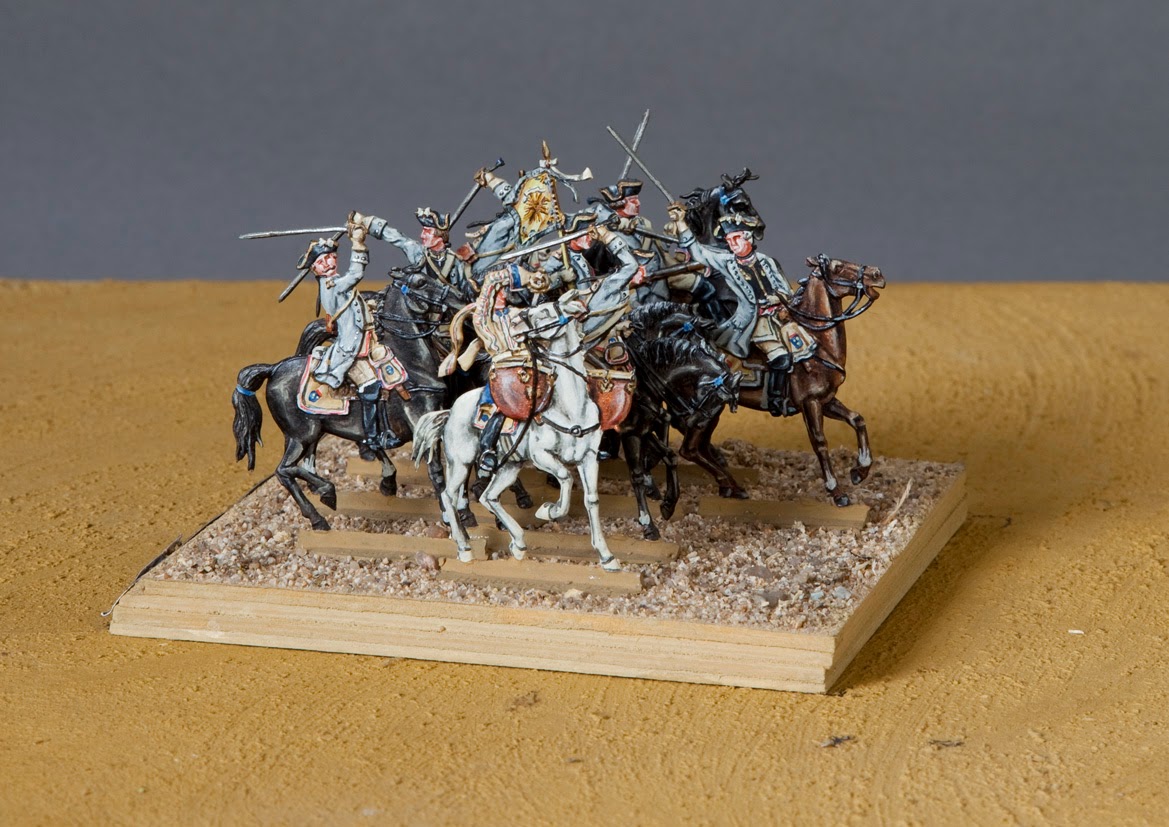 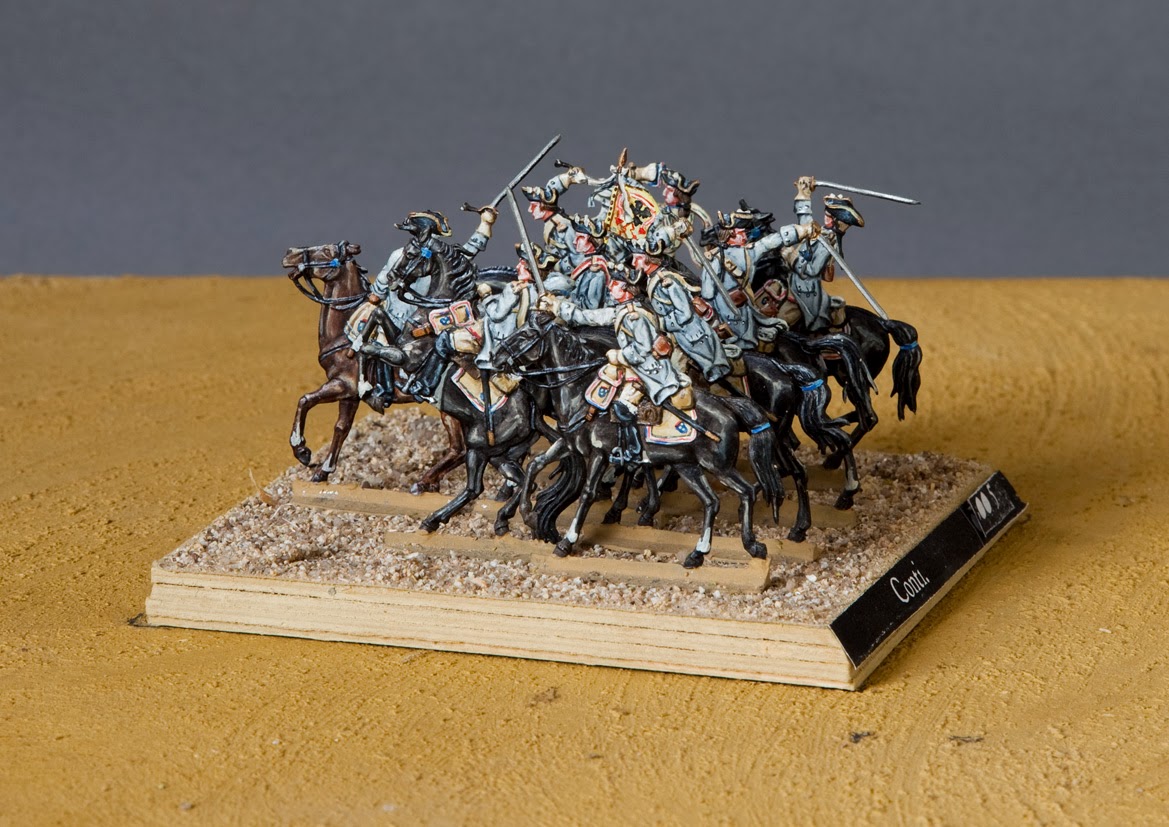 Conti Cavalerie. (Grünewald). I love this unit. Its odd plain grey uniform along with the paille housings make for very stylish looks. At times, less is more - colour-wise speaking. Also note the awesome motion of the kettle drums. The man sure will defend them with all possible determination. 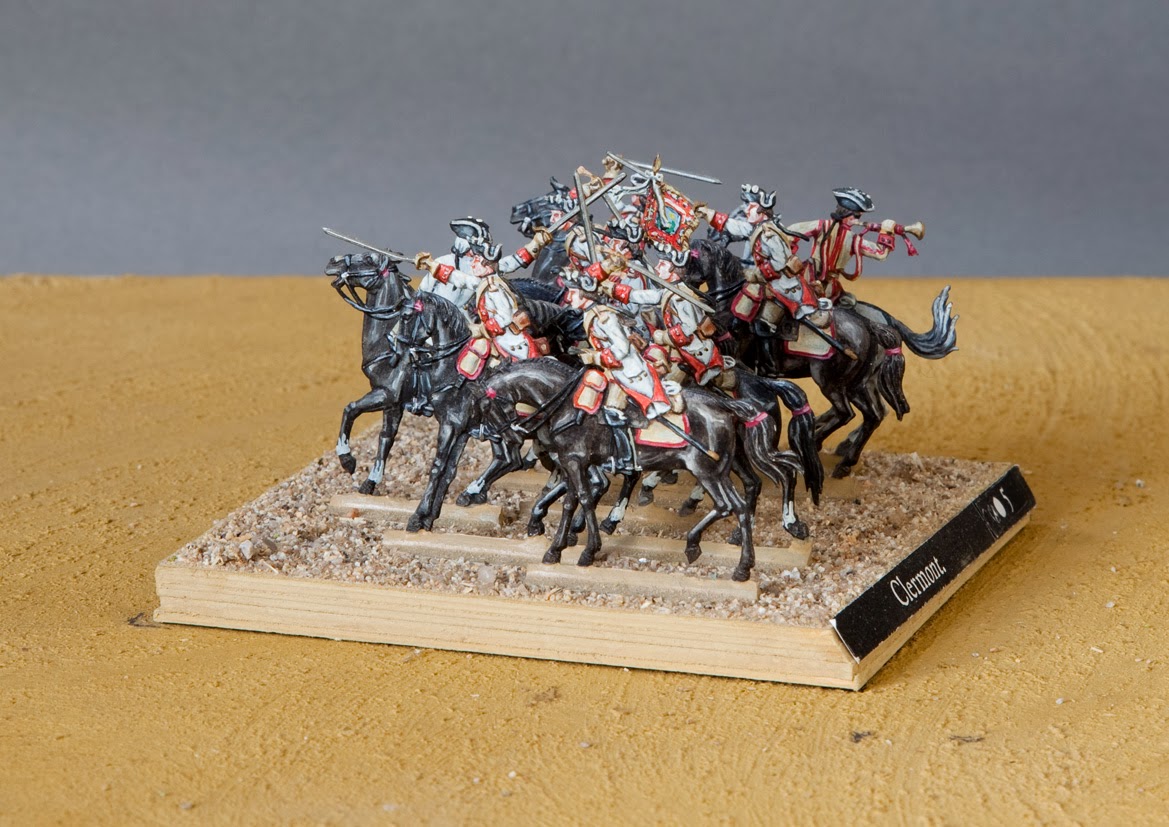 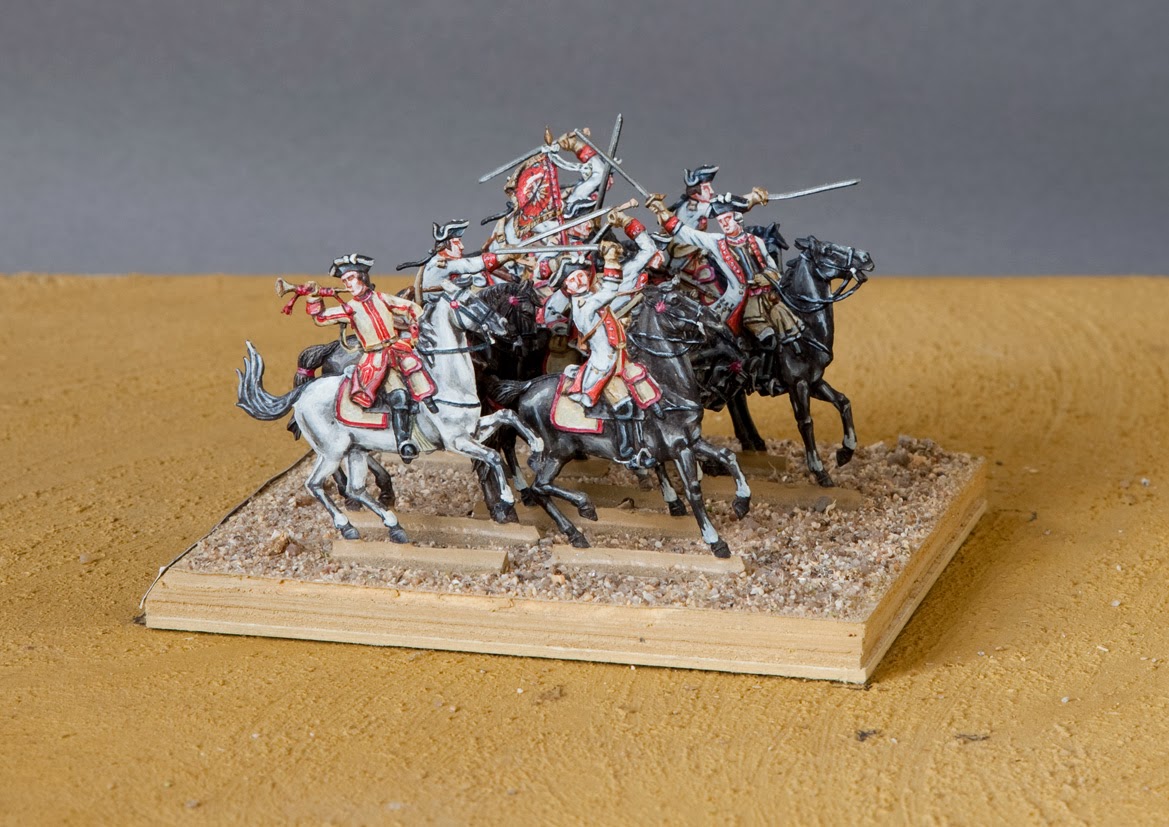 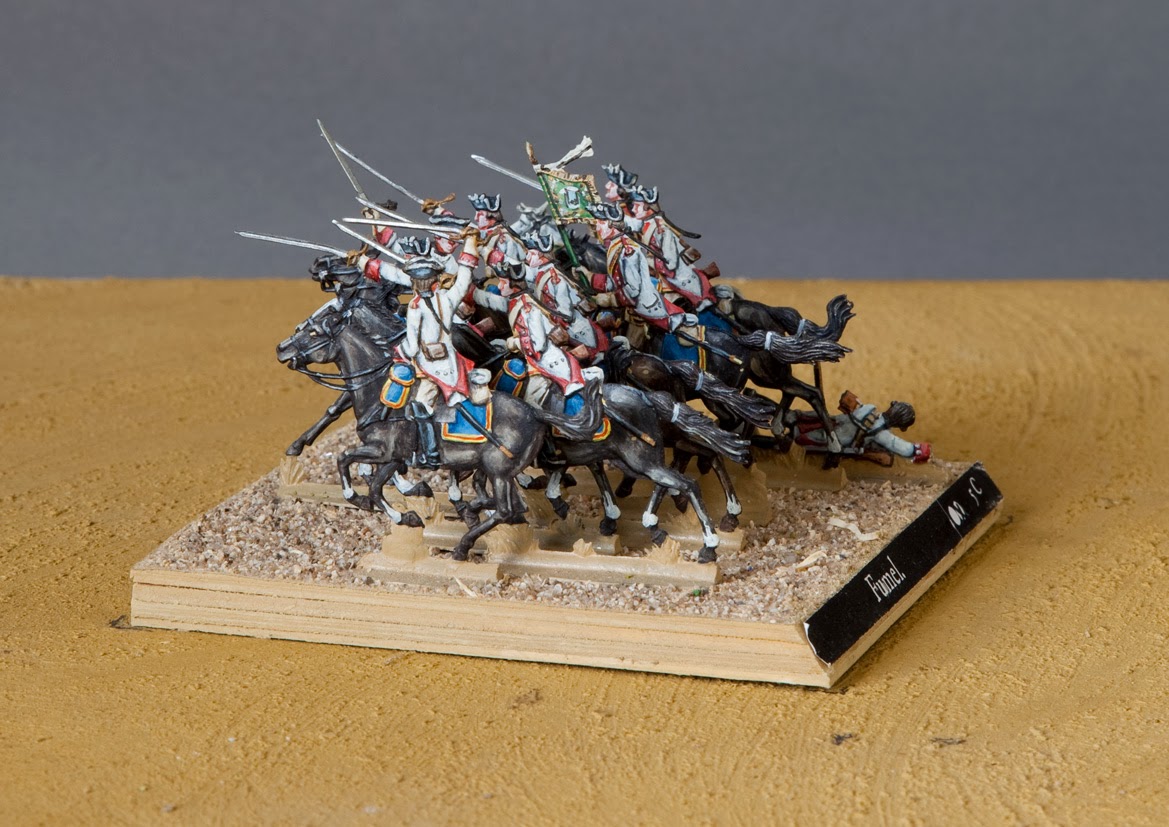 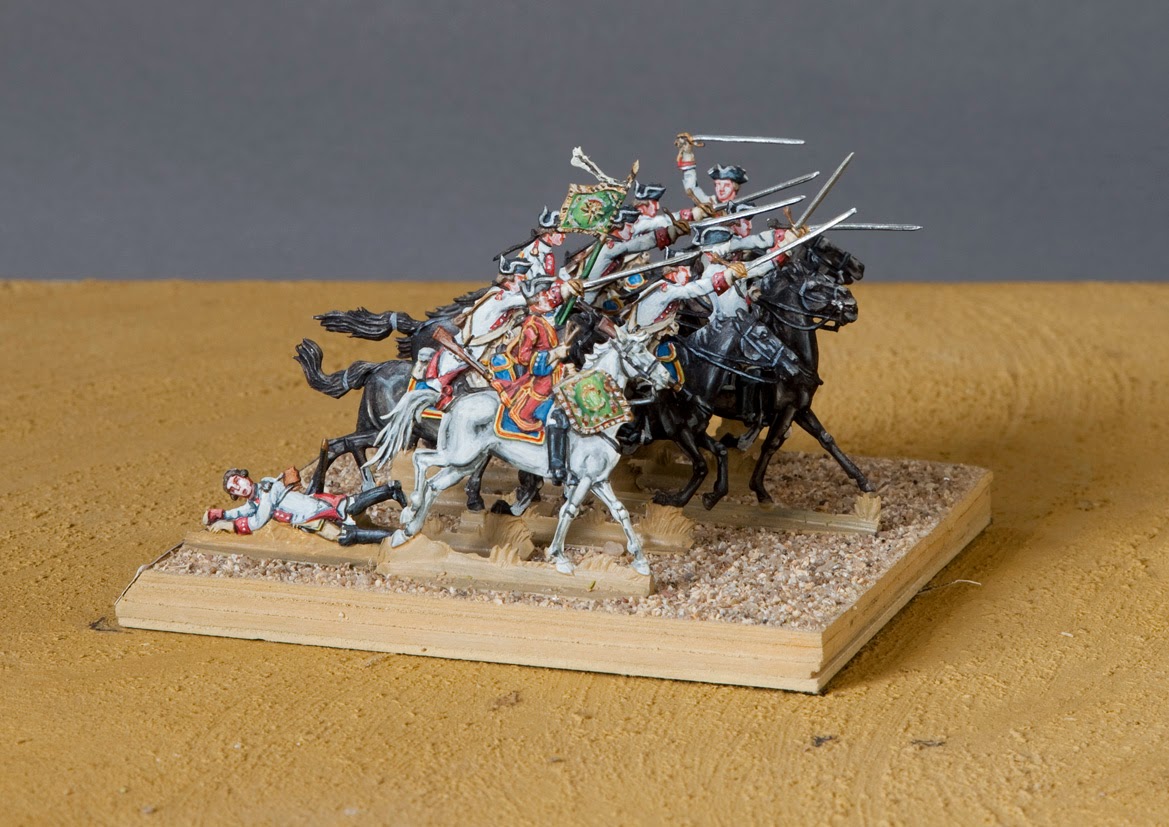 Fumel Cavalerie. (Grünewald). I guess the right position of the kettle drums would be found more centered, but the figure looks so nice that I had to place it in a more prominent position. He is by Ochel, Kiel. 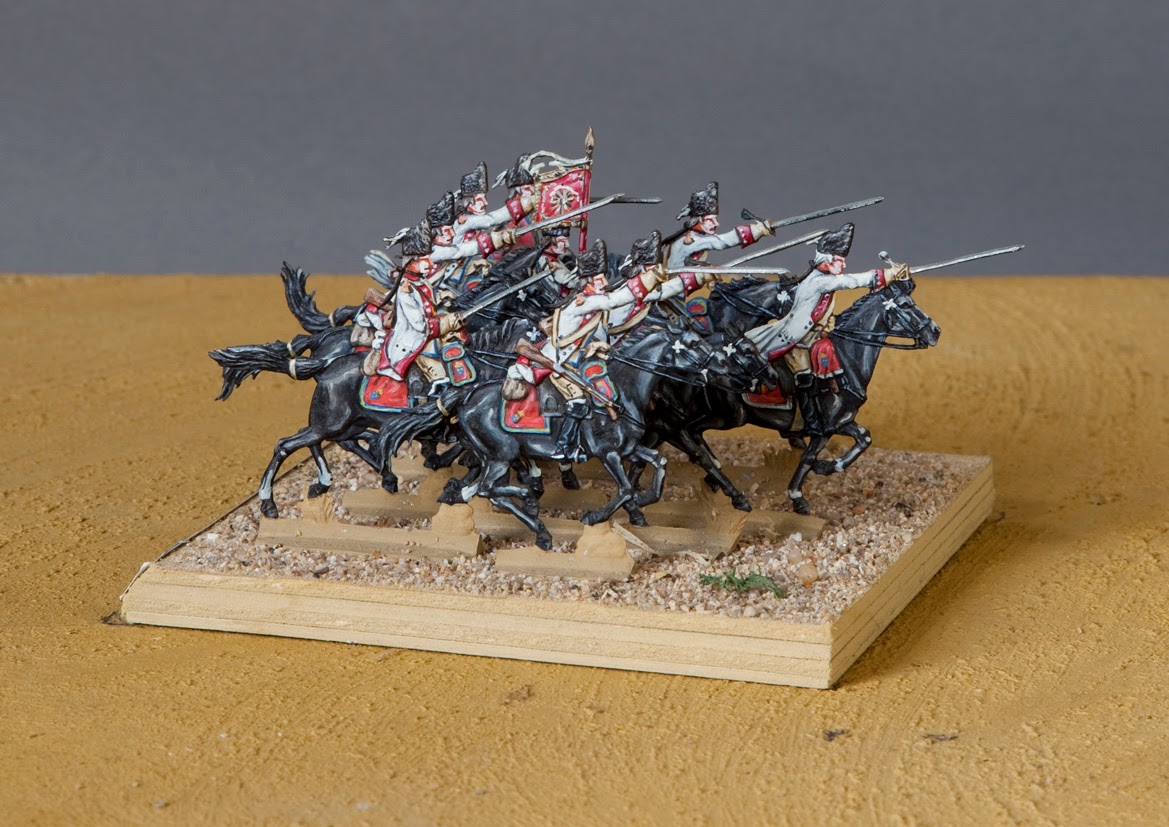 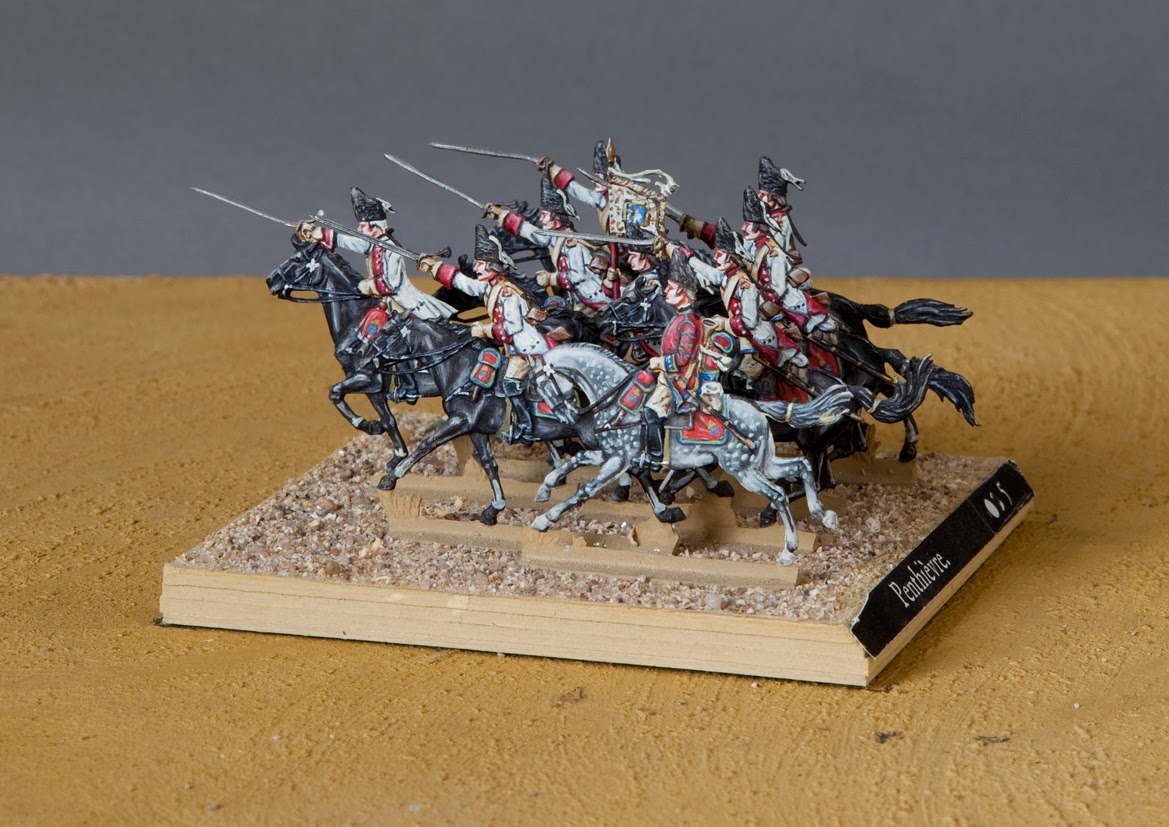 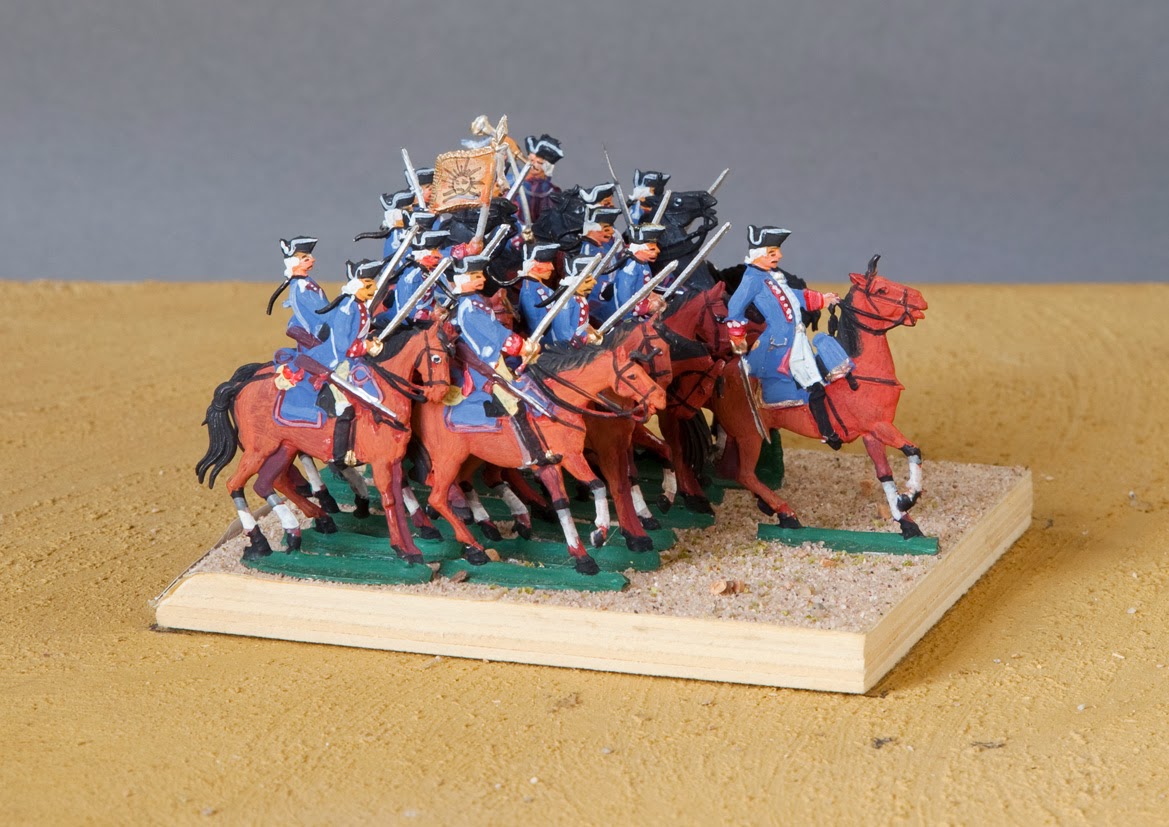 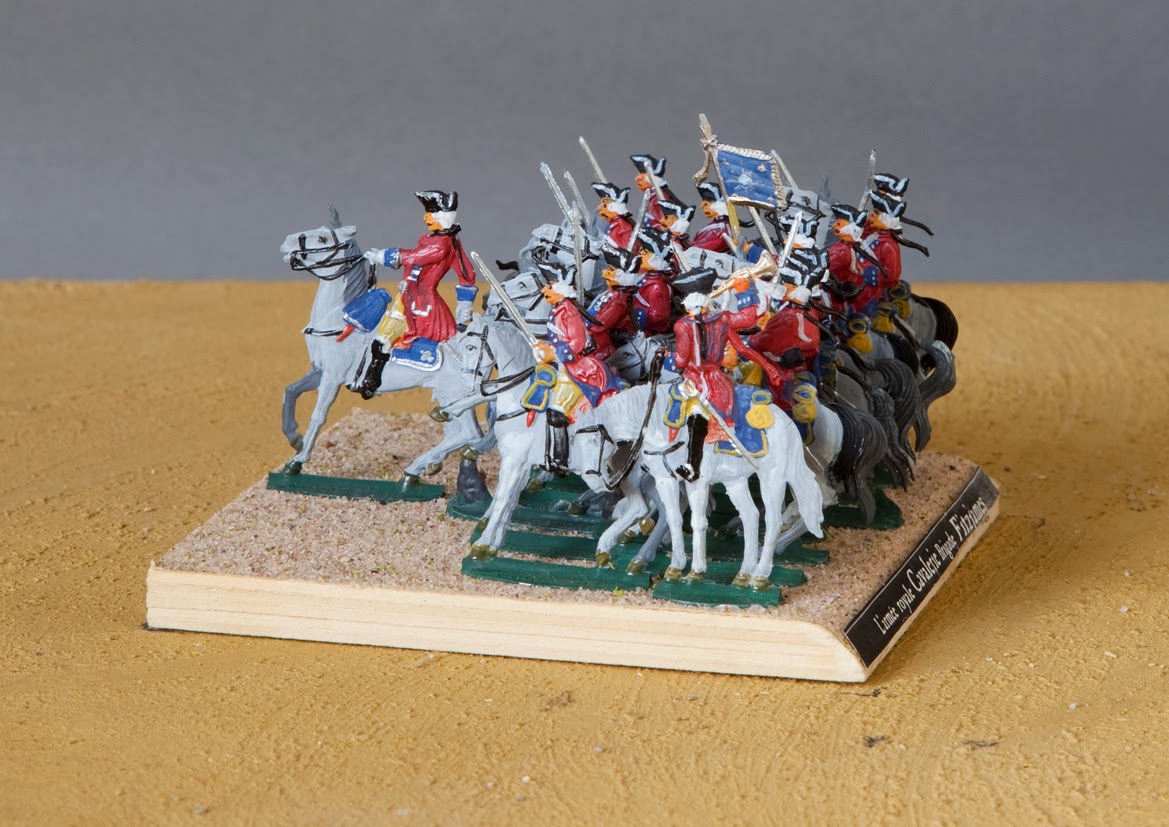 Royal Cravates and Fitzjames Cavalerie.
(Grünewald). I only found these two stands yesterday. They are from the collection of my late friend Dr. Ramb, that I inherited last year. I wasn't aware he also had two regiments of French cavalry. The stands are a bit crowded. About 18 figures to the base mesauring 10 by 10 cm. That's too much. 10 to 12 is just fine. 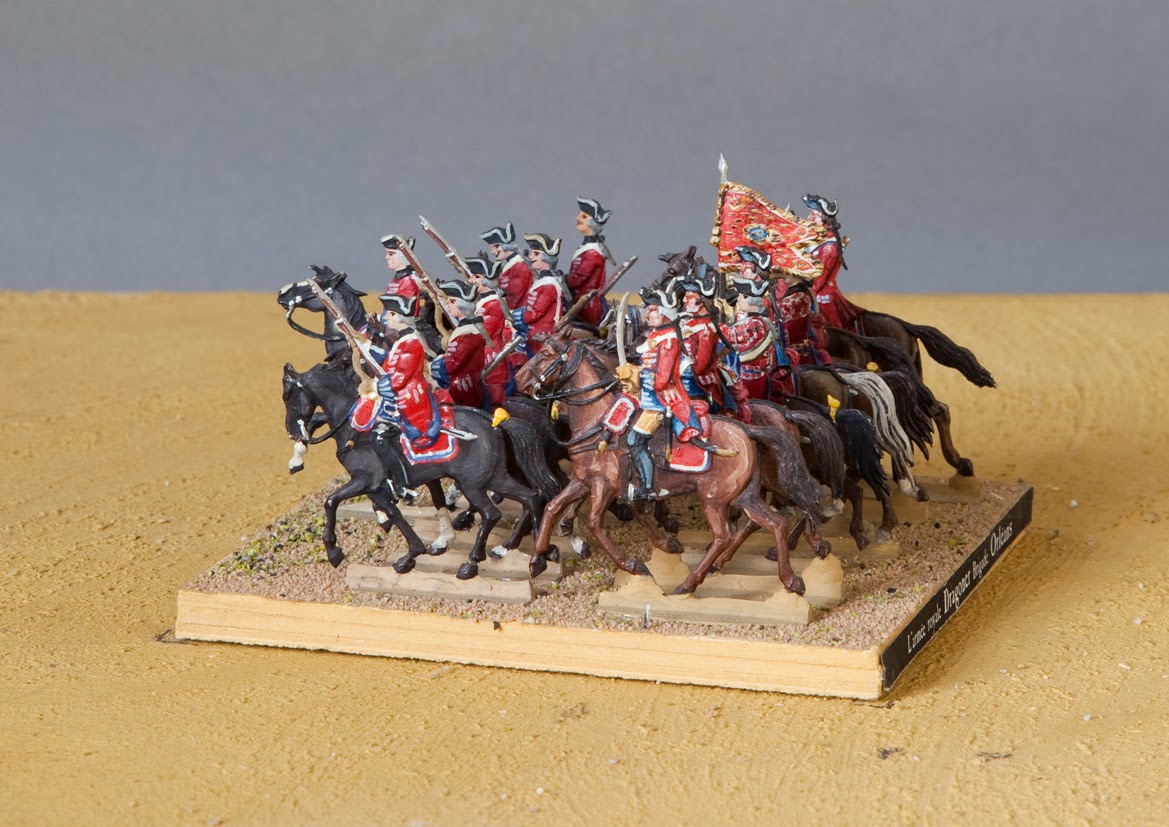 Orléans Dragons. (Ochel and Grünewald). They are among my first miniatures painted back in the 70's when I was a teenager. 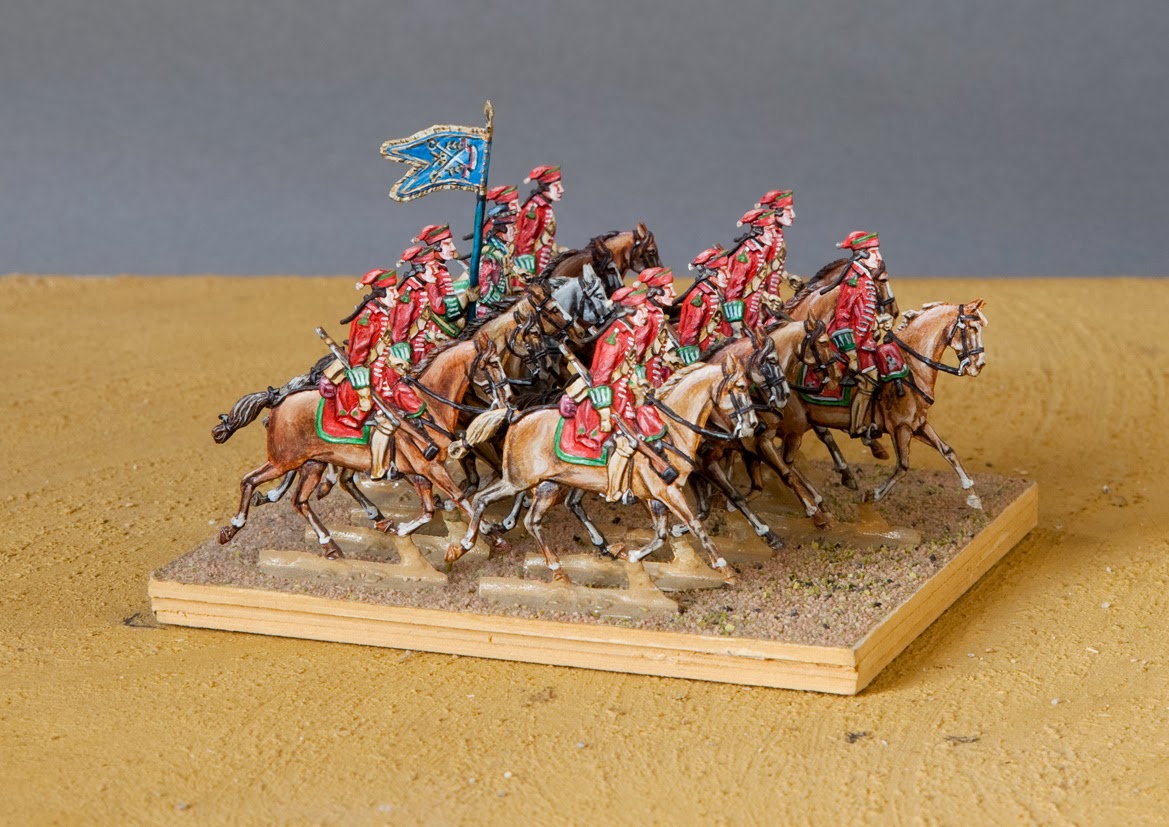 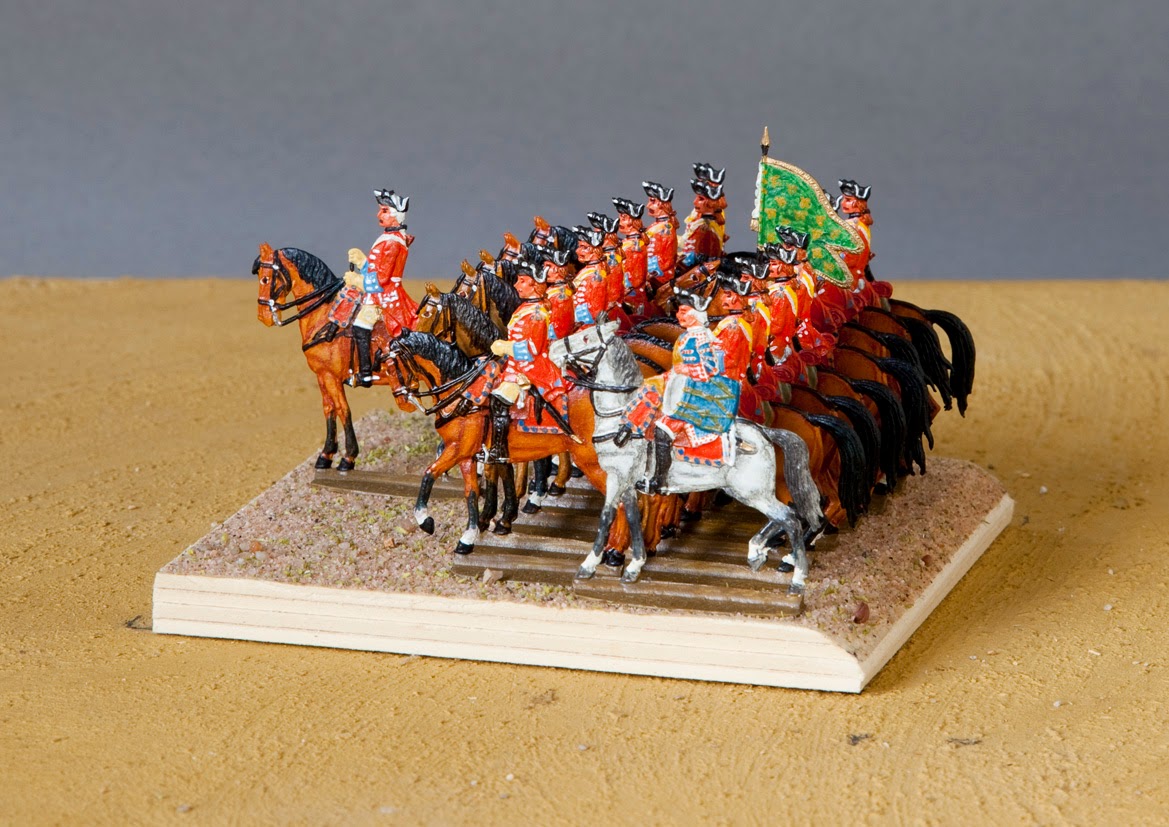 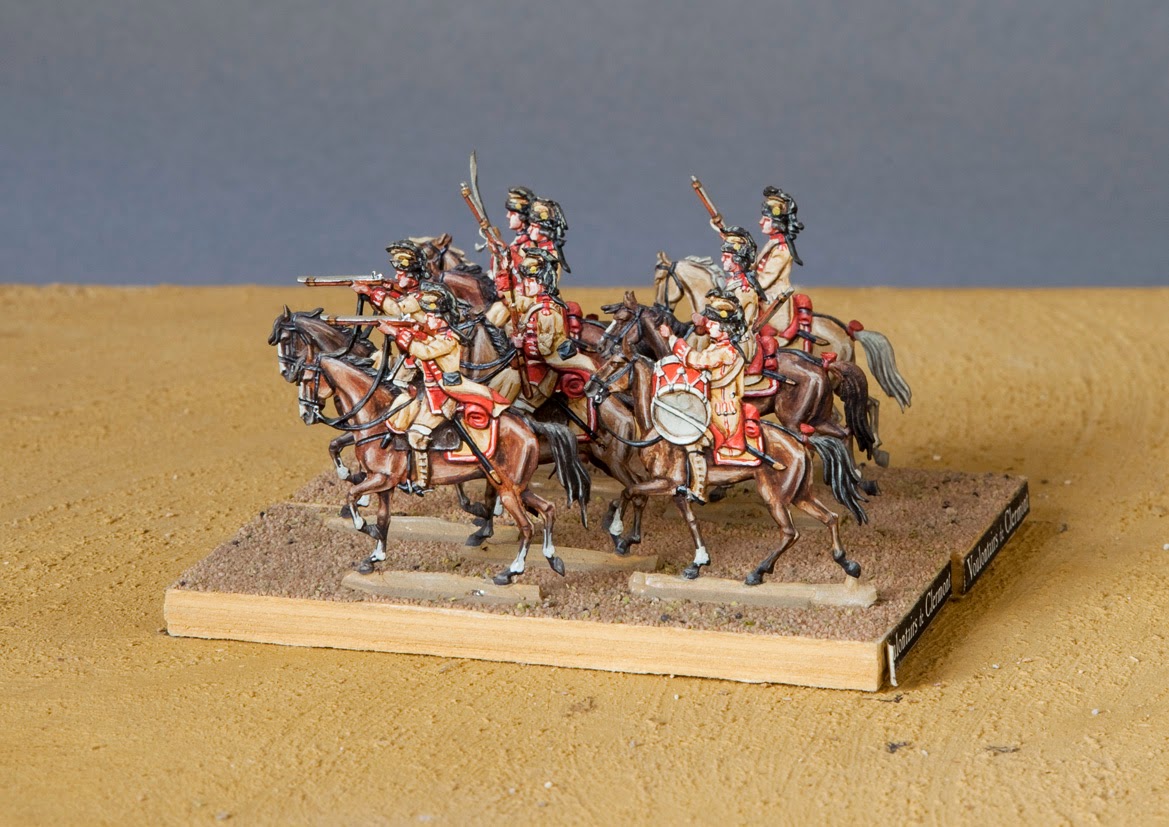 Skirmishing mounted elements of the Volontaires de Clermont -Dragons, légères. (Ochel with converted hats à la Schomberg) The brazing and cutting business was quite an effort. Not sure if I would have the patience for all this today. 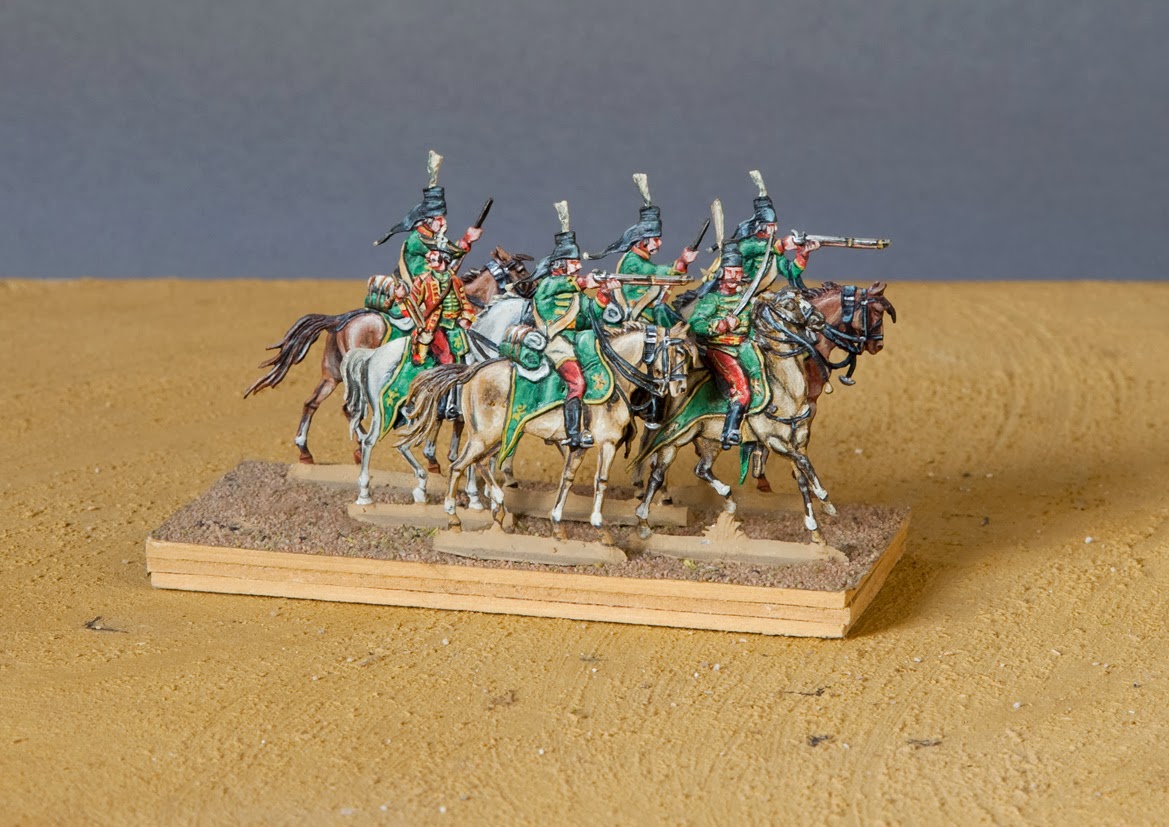 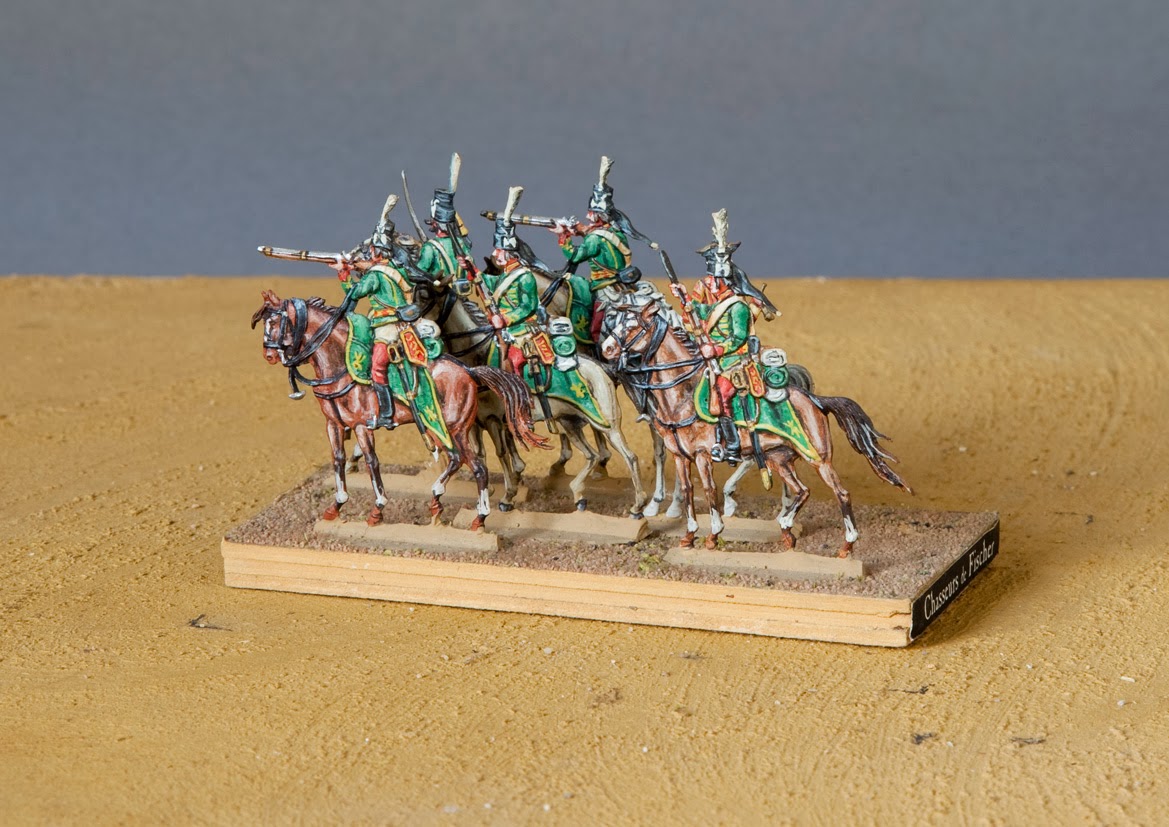 Now, literaly arriving at the lower end: voilà, the notorious brigands known as Chasseurs de Fischer, skirmishing, while awaiting the best moment to fall upon their opponents. (Ochel, Prussian hussars in summer dress with a converted Austrian trumpeter) Take hold of your wallet and other valuable belongings while looking at the image. They might steel it all. That's what they really after.
Posted by My 7YW at 13:11