Earlier this year, I received a a load of most pretty French gun models from Fife and Drum Miniatures. Here is a first image while busy painting and assembling the guns. 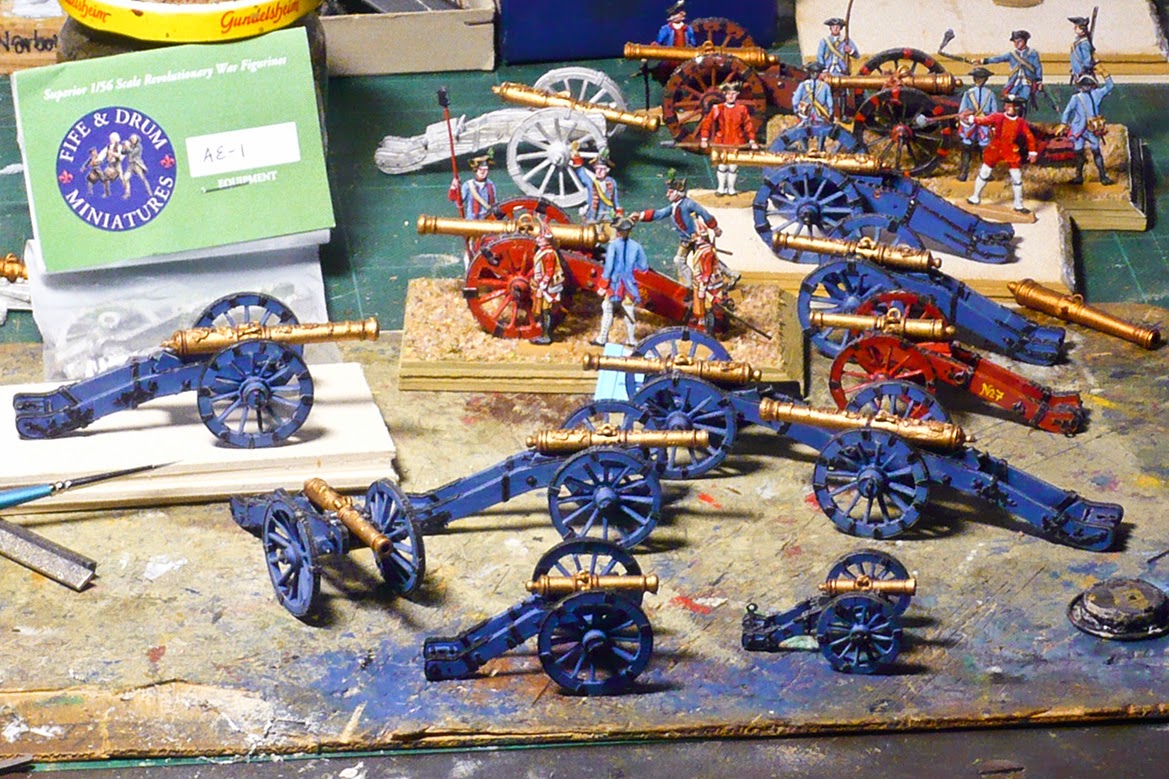 Interspersed, you see two Hannoverian guns (red) and a Buckebourg (black) piece. All skratch-build. The marvelous French F&D models should have long be completed, but honestly, my serious ‘cannon fever’ virus has given way to a much more serious 'football fever’. I can't work anymore. 7:1 ! It nearly killed me last night. 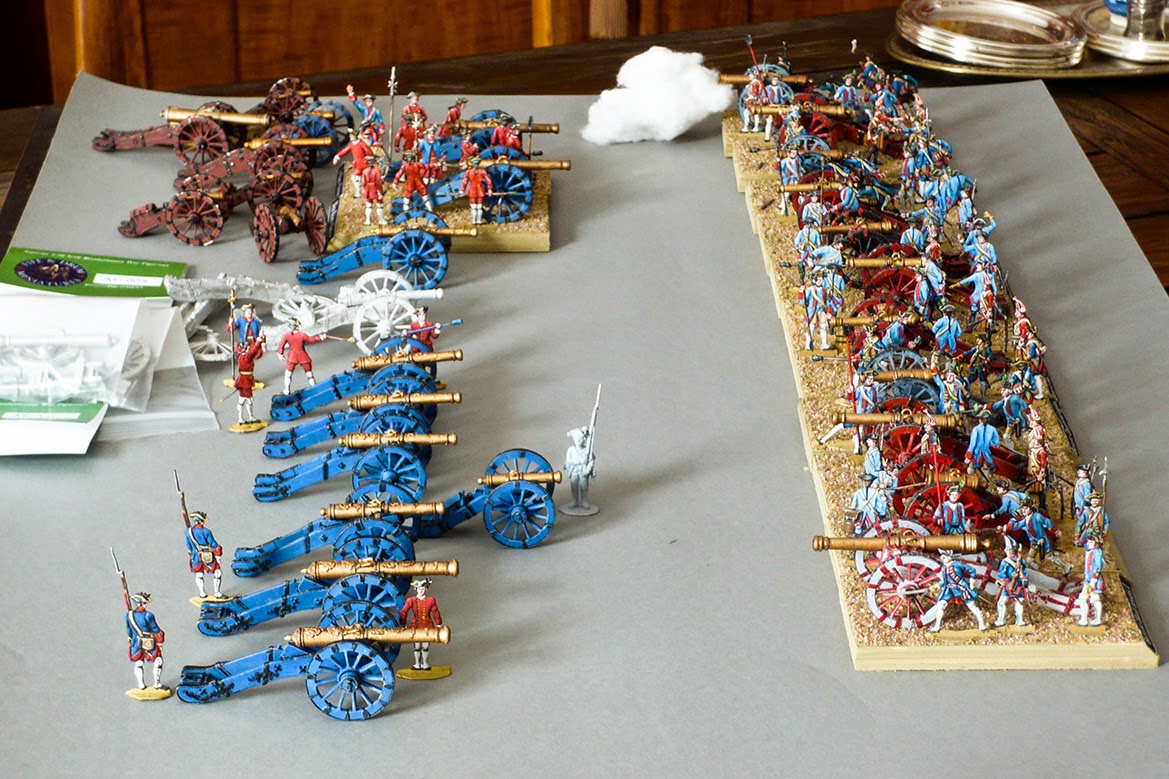 Voilà. My earlier entirely remastered Allied Army's artillery is seen performing a Feu de Joie to cheer the arrival of the French heavy artillery in My French Armies camp. A tribute to an ancient custom among the French Gens de Guerre. The Allied Army's guns are lined up strictly according to the Ordre de Bataille found on the day of Minden. We see capt. Macbean's English medium 12-pdrs of the right wing commencing with the first discharge of joy. My receiving of these fine French gun models deserve no less then utmost Pomp and Circumstance. No less will do justice to this truly extraordinary event.
Now, with many being assembled and painted, I must say they are among the most pretty models I have ever seen. Even better, they are authentic looking. After wargaming with French 7YW armies for about 30 years now, it was high time. My old funny painted and funny scaled models seen in the upper left now having been removed from the field inventory. The credit goes to Jim Purky, who took the effort and risks to release an entire range with Fife & Drum Miniatures. Mr. le Maréchal de Broglie has only recently awarded him the royal privilege promoting him Chief Prime Contractor of Les Armées du Roi en Allemagne. Mr. le Maréchal can't await to receive more even heavier guns. Now, lets have a closer look at the material received. 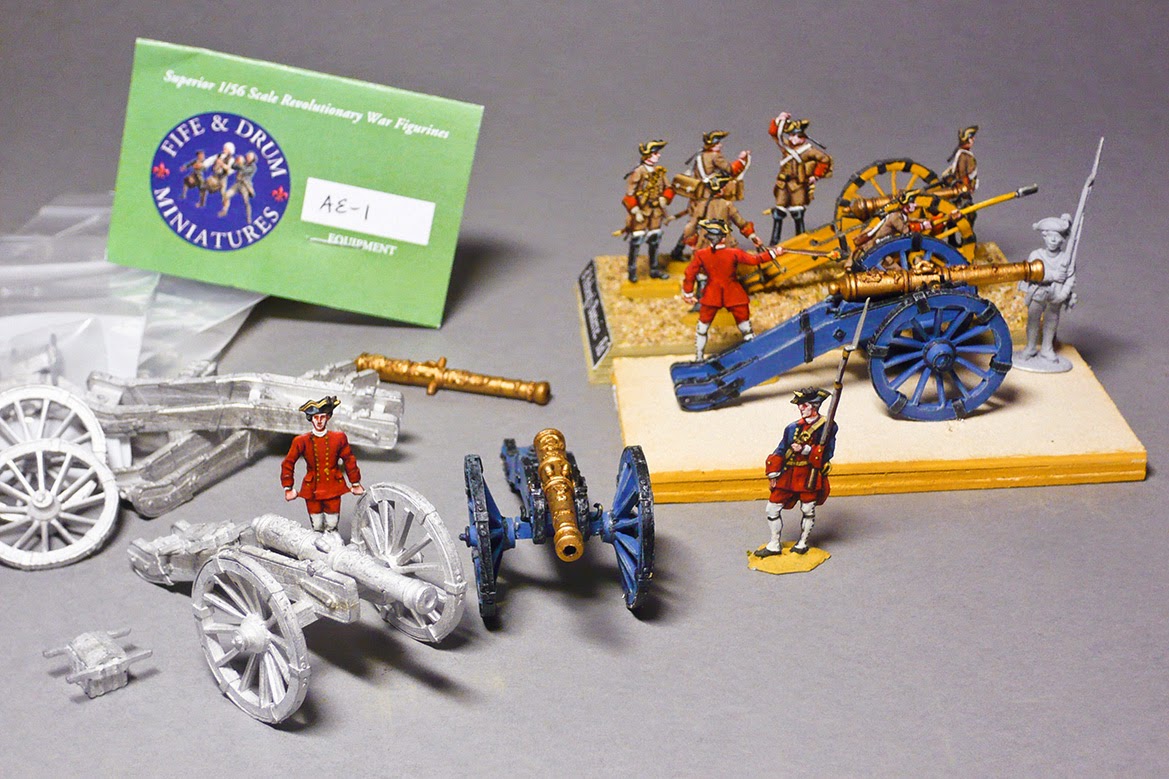 Above see the long 4-pounder field gun. The track width of the original model is rather generous. For the AWI period it may be just fine, but I reduced it somewhat, in order to make it a better match with all my existing gun models. I also took the effort of adding a pair of hooks at the front face of the carriage. I've done this with all of my scratch build models, so that wasn't much of an effort. In the background you see the Austrian 6-pdr field gun with its barrel so much shorter then that of the Vallière long 4-pdr. It really was a much bigger gun despite having a smaller calibre. The dimensions are perfect. Next comes the French short 4-pdr à la Suédoise, the French battalion gun seen in the foreground. 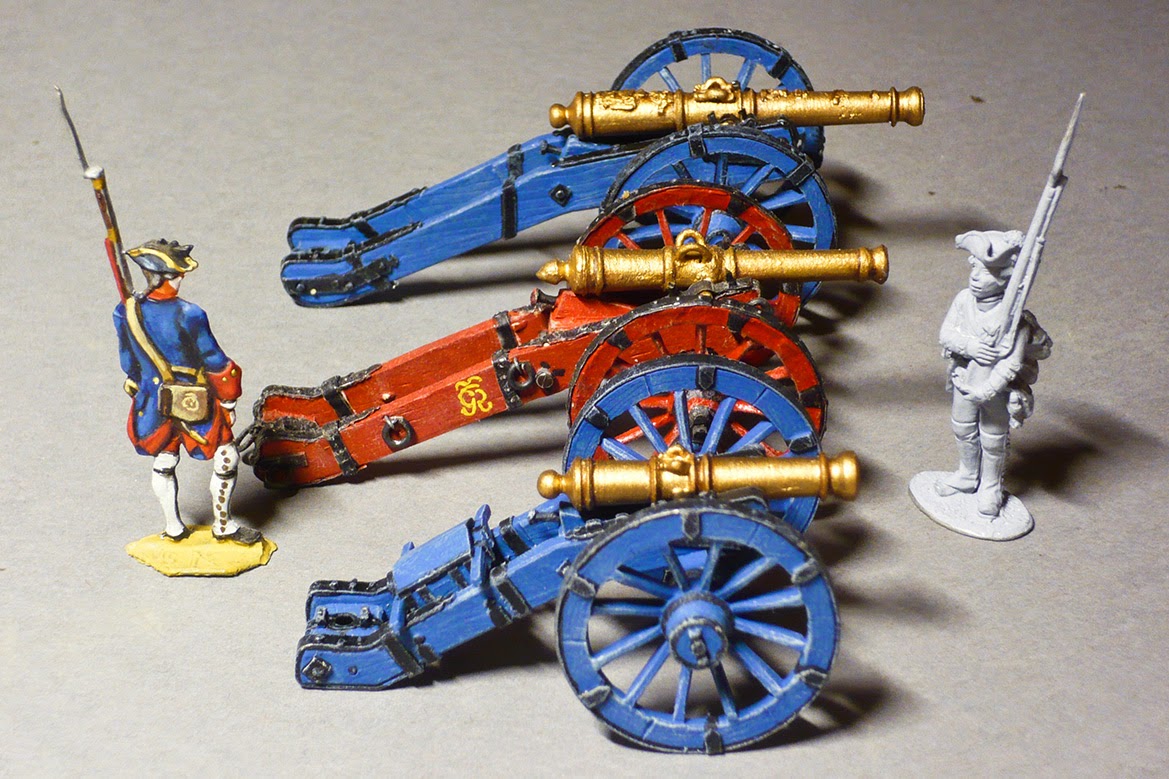 It looks wonderful and has just the right authentic dimensions. The ammunition box of the French battalion gun is really the Gribeauval M1765 version. Again fine for the AWI, but should be also just fine for the 7YW period. I placed the gun next to a scratch built Hannoverian principal 3-pdr model (red) and the French long 4-pounder. These three models alone should have accounted for about 60% or upwards of all cannons fielded with the campaigns of the French vs Allied Armies of the 7YW.
Next comes the Vallière M1732 12-pounder model. 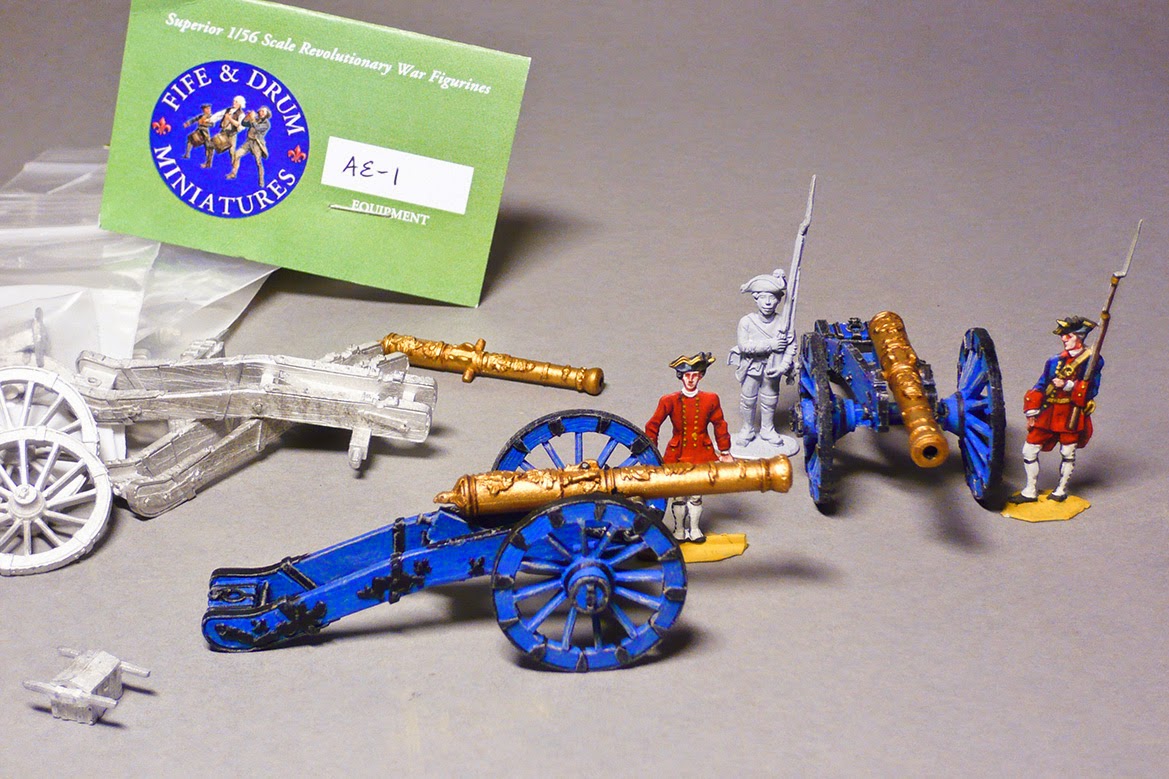 Again a most authentic looking piece. It is especially nice to see my suggestion of the extra rococo-style iron fittings being accounted for.

Unfortunately, this 12-pounder as well as the 8-pounder Vallière cannon models were done to a smaller scale then the two 4-pdr models.
Something went wrong here, but that isn't of no big issue. Effectively, the F&D 12-pdr model arrives at the dimensions of the 8-pdr, while the latter model is effectively another 4-pounder. 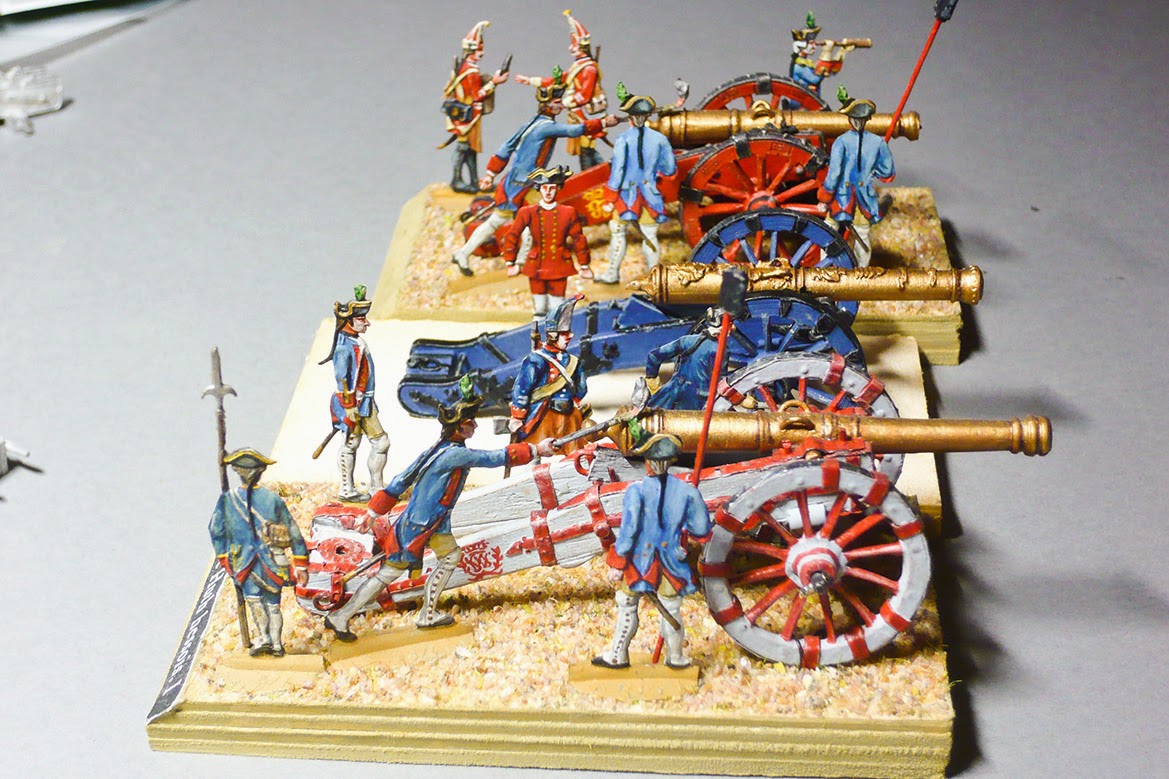 See the French piece arrayed between a Hesse-Cassel battery gun 12-pdr (front) and a Hannoverian 6-pdr heavy field gun (back).
The French 12-pdr should really be a tad longer then the Hessian piece. Both were of similar dimensions. It matches so much better with its equivalent Hannoverian 6-pdr, a heavy field gun not to be confused with the British or Prussian light 6-pdr battalion guns. It had a barrel length of approx 246 cm, while the French 8-pdr arrived at 264 cm, both excluding the cast on cascabel and button at the rear of the barrel. As a result, I added this F&D Miniatures 12-pdr as an 8-pdr into my park of French artillery – and awaiting heavier pieces yet to arrive in the camp of the French Army in Germany.
Posted by My 7YW at 12:38