An Easter Friday's Refight of the Battle of Minden, 1 August 1759

This past Easter Friday 4 April, our group had a most hard fought refight of one of my most favorite SYW scenarios. The day of gaming Minden was scheduled in our calendar as "Le Super Grand Easter Bunny Massacre". In the event, this game turned out to be precisely that. Instead of the historic 4 to 8 thousand casualties, ours would have been closer to 15 thousand and upwards for each side. A SYW Western Theatre's Zorndorf, so to say.
Well, there isn't so much to say about this rather well known battle. See below sketch of our gaming table - dimension wise speaking. 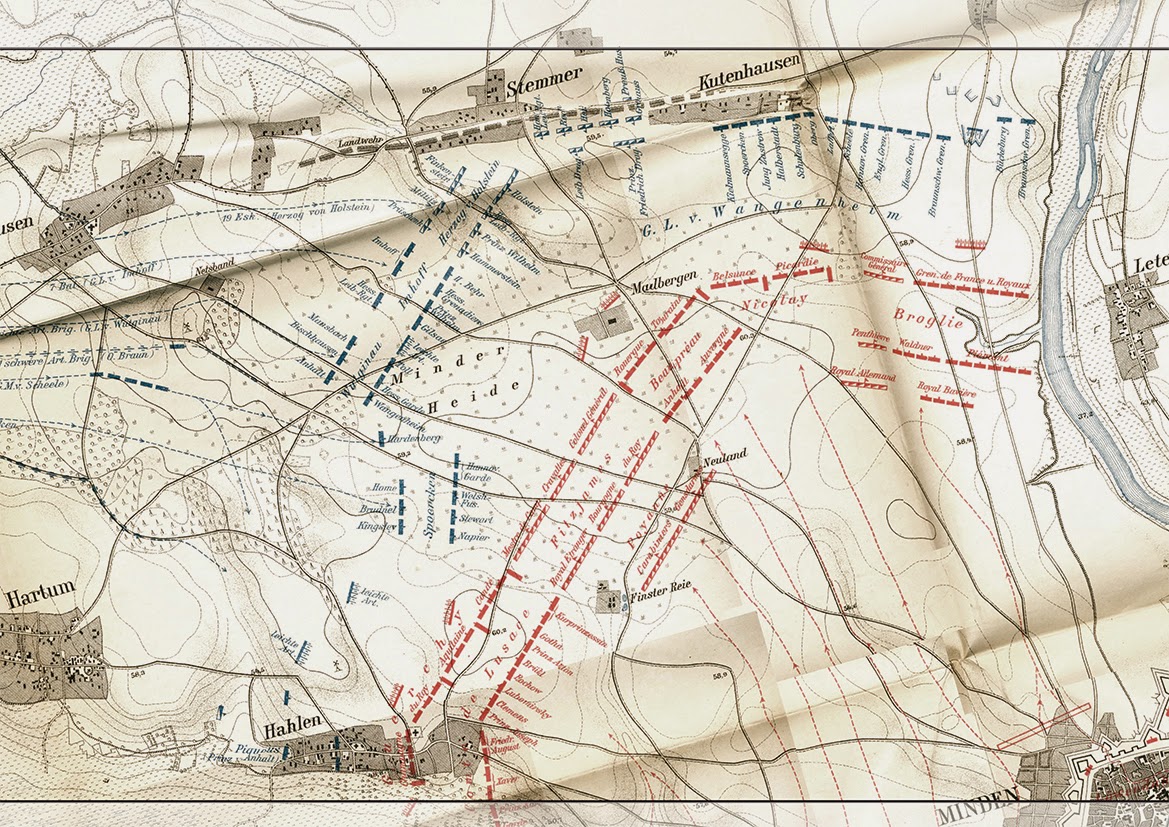 My scenario was laid out rather closely to the historical situation at around daybreak with the French found in columns at their designated points of deployment and the somewhat delayed Allies found approaching their designated area of deployment. Thereafter, all of the four of us gamers were free to decide what to do next. The above sketch, arranged by the gentlemen of the German Großer Generalstab Department of Military History during the early 20-hundreds is just "their" suggestion to illustrate their narrative of events. Really, the French army at no time was ever found delployed the way it is seen here. The fight was over before all could enqueue into their designated positions. Also the Allies forces deployment makes only a rather loose fit. Fine enough for me to set up the initial starting positions for all.
I played on the French side, of course, given my last years rather epic painting efforts to turn My French Army into about as most authentic as possible. 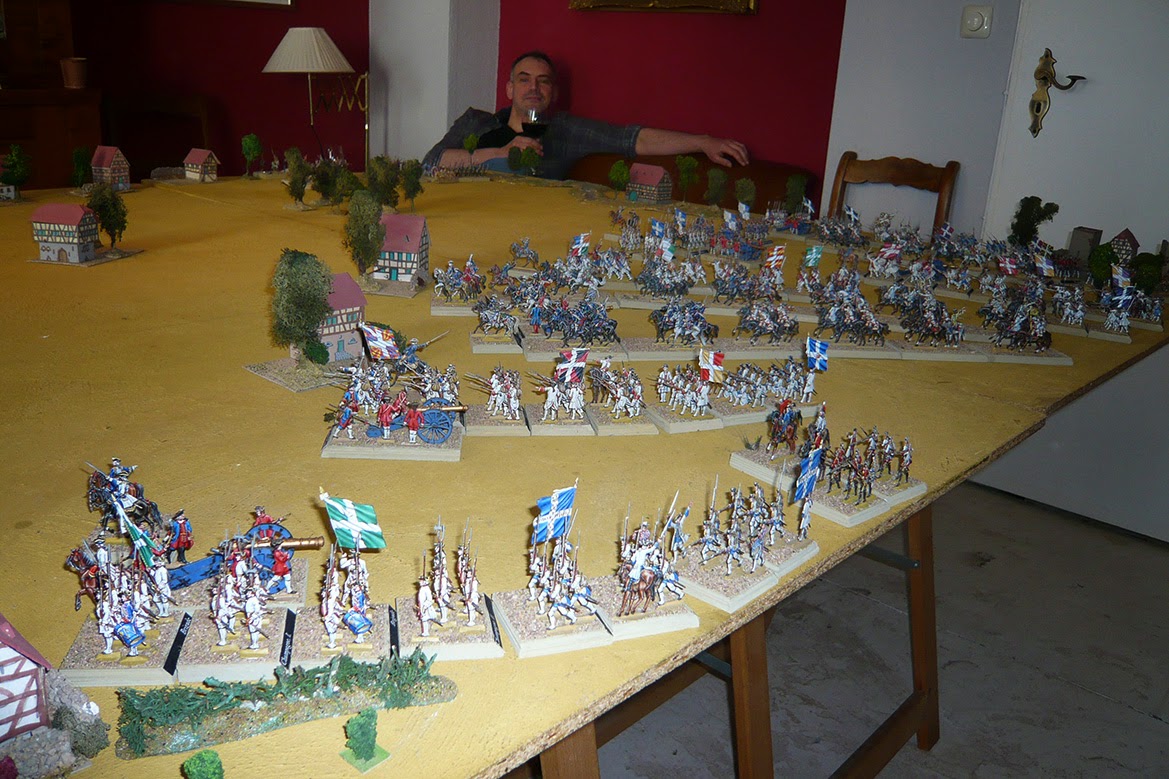 Above see the French columns in their initial positions closely based on Maréchal Contade's notorious dispositions. They weren't all that bad, really.
Admitted, Jomini's critics are just. He proposed the French army's deployment could have been much faciliated if he had done it the simple way so much preferred by Old Fritz – i.e stepping off camp in order of line by the right, rather than in the custom multiple columns found when marching by wings. But Ferdinand was no better, marching his army onto the plain of Minden exactly the same way. 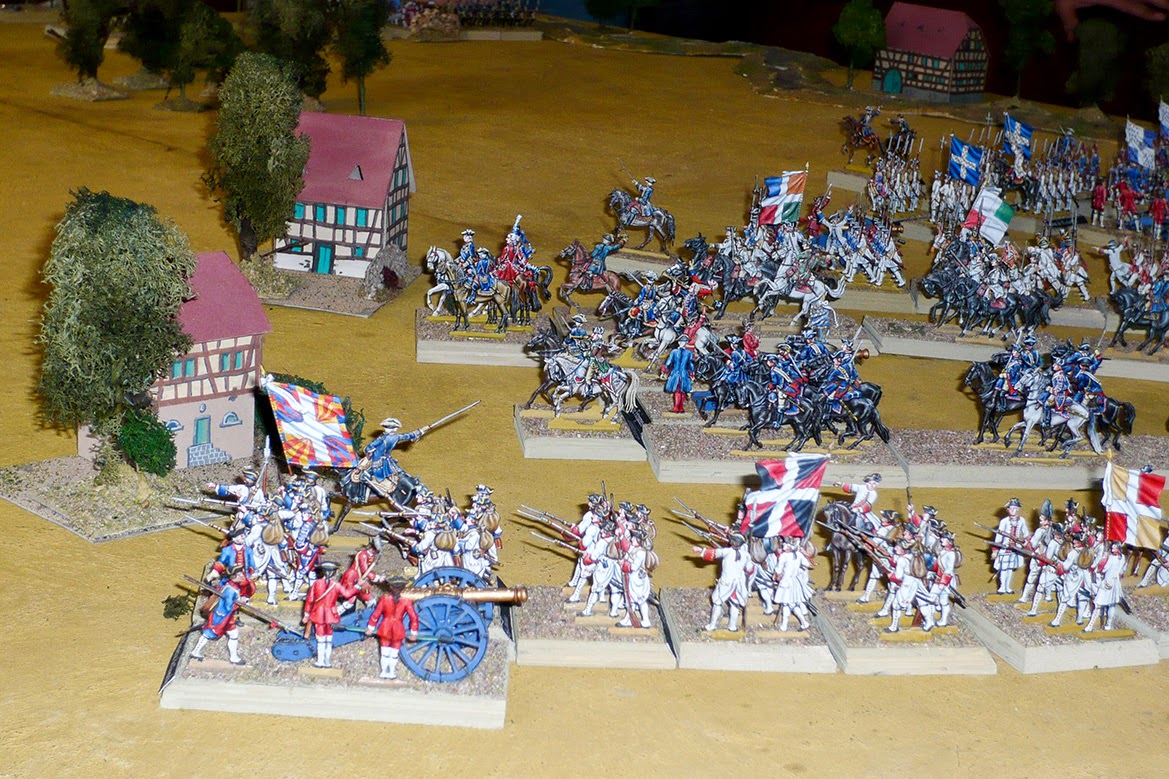 A closer view on the French centre near the hamlets of Neuland and Finster Reie – in contemporary French accounts usually referred to as les maisons rouges (the red houses). 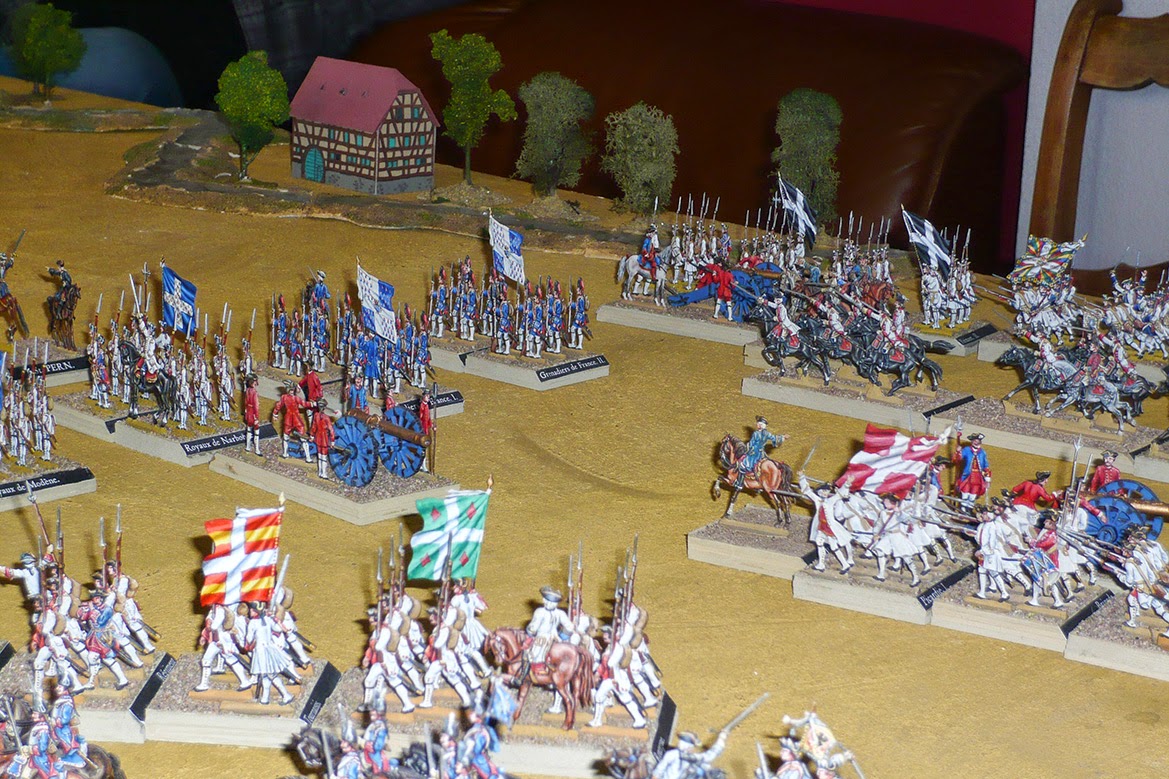 A closer view of the French far right with Broglie's corps deploying along the banks of the Weser river. It was my command this day, along with Contade's Grand Army's divisions of Nicolay and St. Germain. 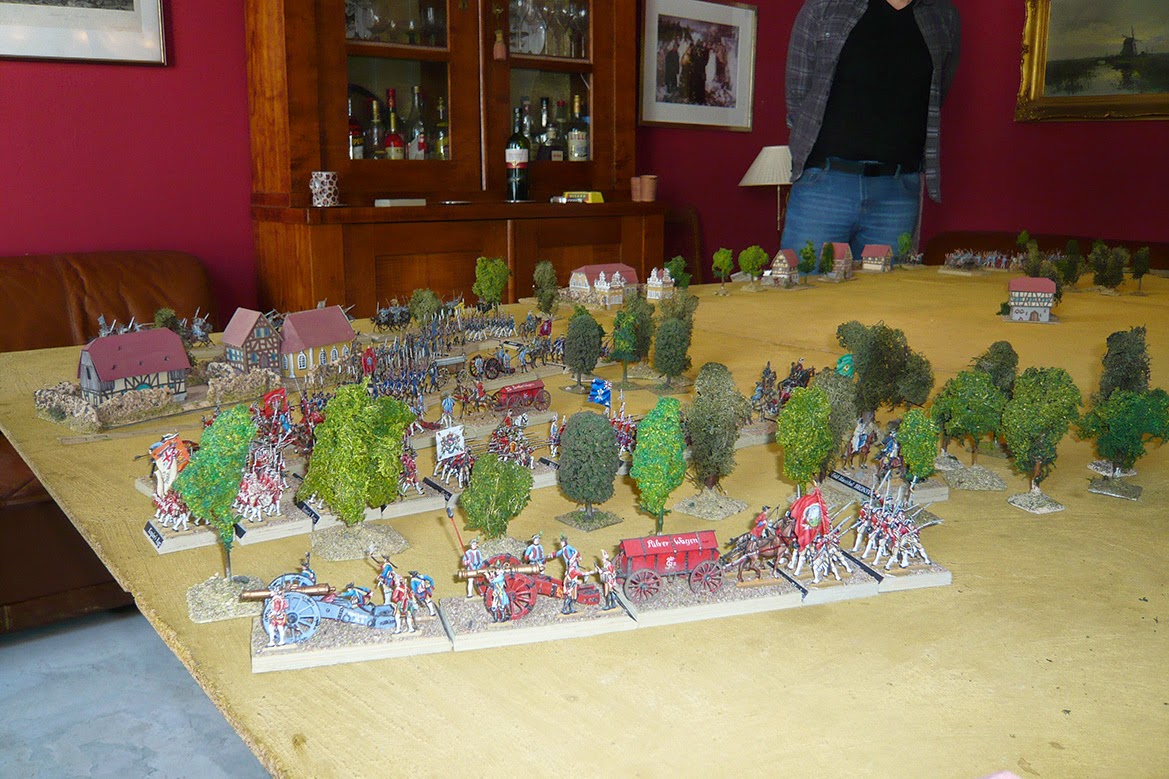 The approach of Ferdinand's Allied Army through the cluttered terrain separating their camp from the plain of Minden.
The 2nd column of the right made of the heavy British/Hannoverian artilley under major Haase & capt. Macbean seen in the foreground. Again, no sight of general Sackville's British/Hannoverian cavalry of the right, being the first column. Apparently delayed, as ever – just to hold on to this running gag of mine. 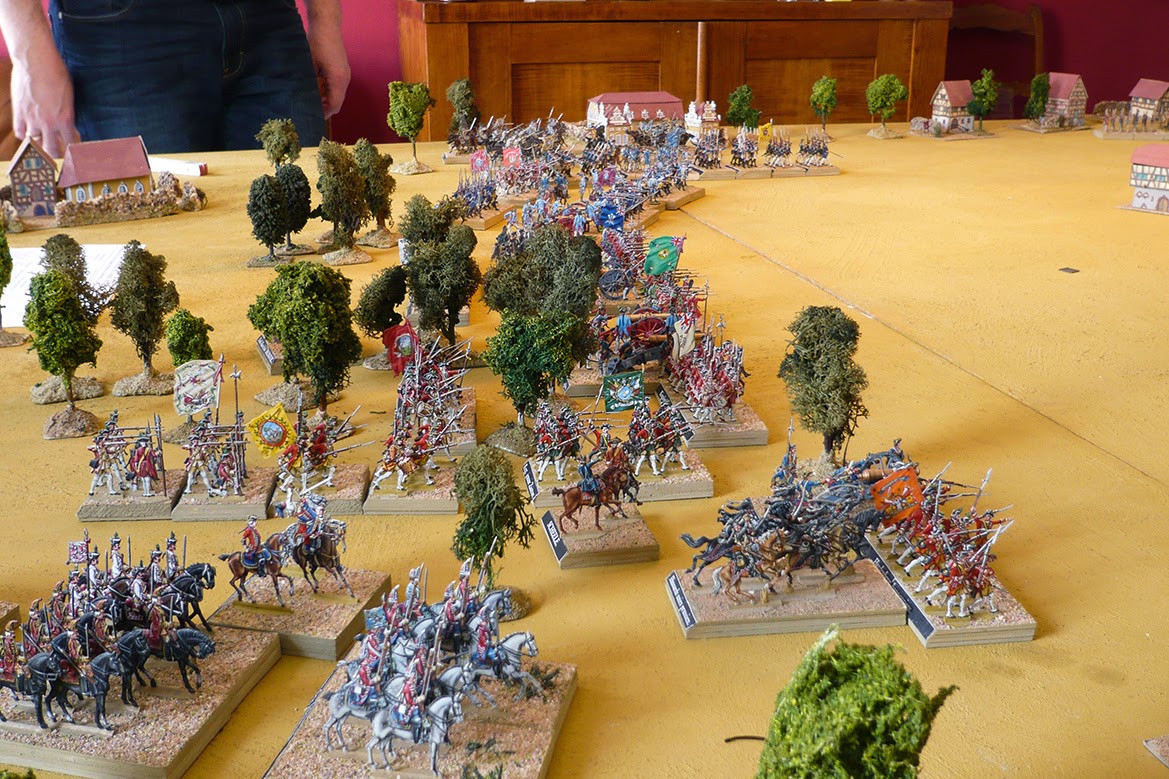 The Allies deployment in progress. Now, we can also see Sackville's English etc. horse catching up in the foreground. Today, certainly so much more determined then in real history. We also see general Schele's Hannoverian infantry division deploying to the right of the English division. Oh boy, now Schele will have to compensate Waldgrave's English infantry for stealing their designated right wing position with the regular order of battle. My responsible opponent V*** playing on the Allied right wing fought his first SYW battle this day, I should note (He plays Revolution and Napoleonic in real life otherwise). He took great pains to get his troops aligned most neatly in line of battle, just as if being at the royal musters in Hyde Park. It was his understanding of a real orderly battle - so much different from all the decline and ugly libertinage found in the ensuing napoleonic period with moving troops on a battlefield. 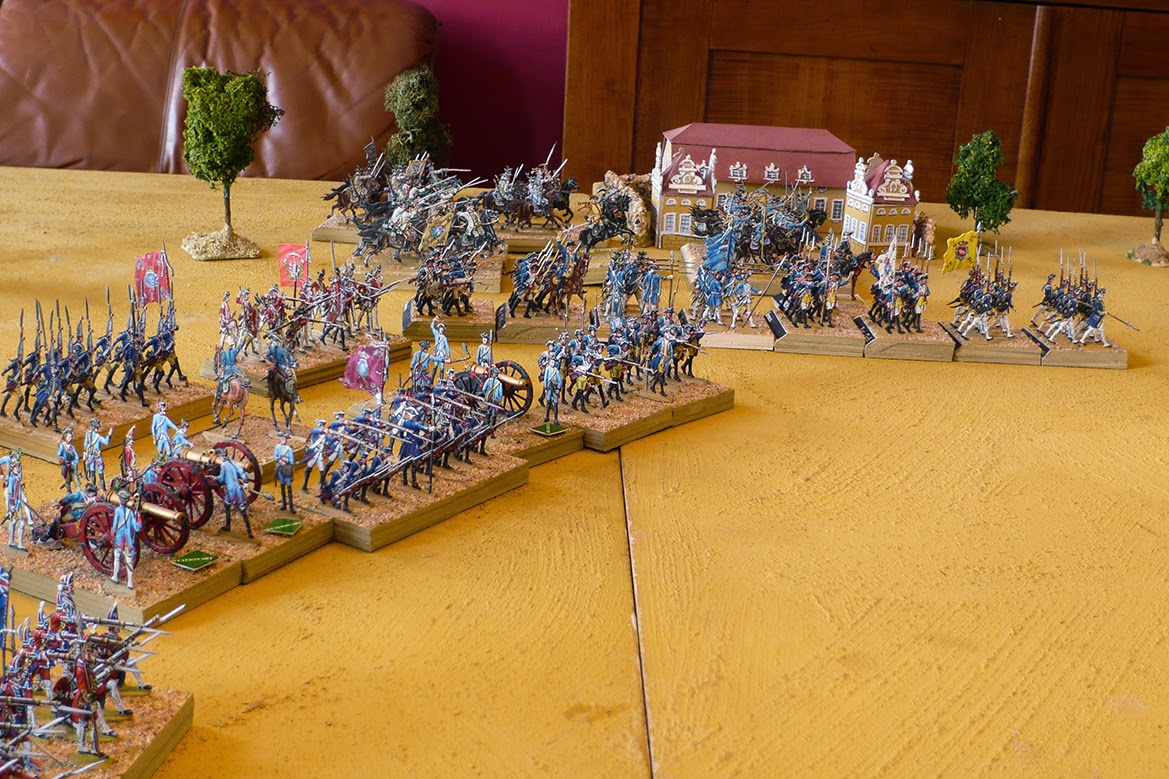 Here see everyone is waiting  for general Imhoff's left wing infantry and the cavalry of this Prussian booze head Holstein filing into the battle array. All this took a while and gave the French the singular opportunity to carry out their plan of attack.
This plan of ours was a courageous and violent thrust into the the Allied Army's "predetermined breaking point" - i.e. the gap seperating Ferdinand's main army with the eastward deployed corps of Wangenheim and Bevern at the Weser. Now, this plan worked out quite charmingly and made this Minden refight a victory of the French arms in the event. 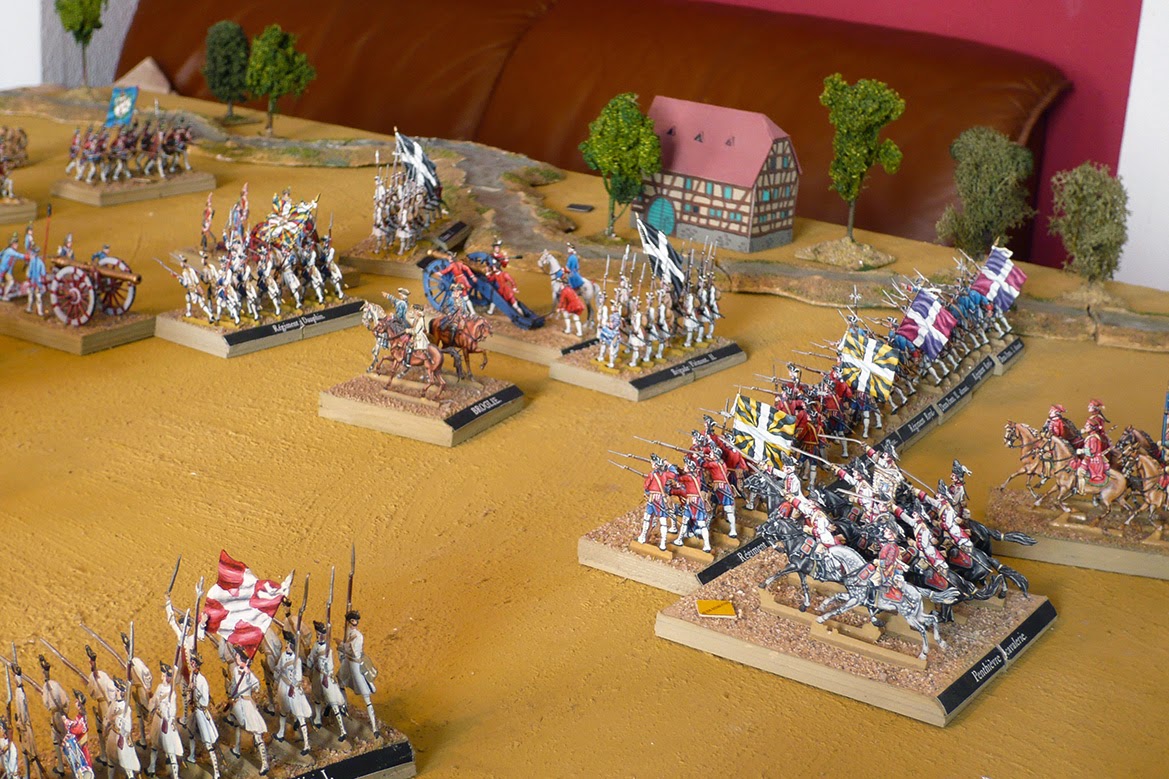 Broglie's corps seen attacking Wangenheim's advancing force. The main French thrust was delivered to the left of the smallish wood forming the right of Contade's main force and the left of Broglie's Reserve Corps. The fighting here was so intense, that I didn't find the time to do any photos.
My opponent L*** wanted this wood just as much as I wanted it. In the end, my elite French Grenadiers prevailed but were found exhausted and of little use with the upcoming events.
I'm afraid, the hottest of this day's fight on the French right wing isn't documented. I was too busy playing, I guess. 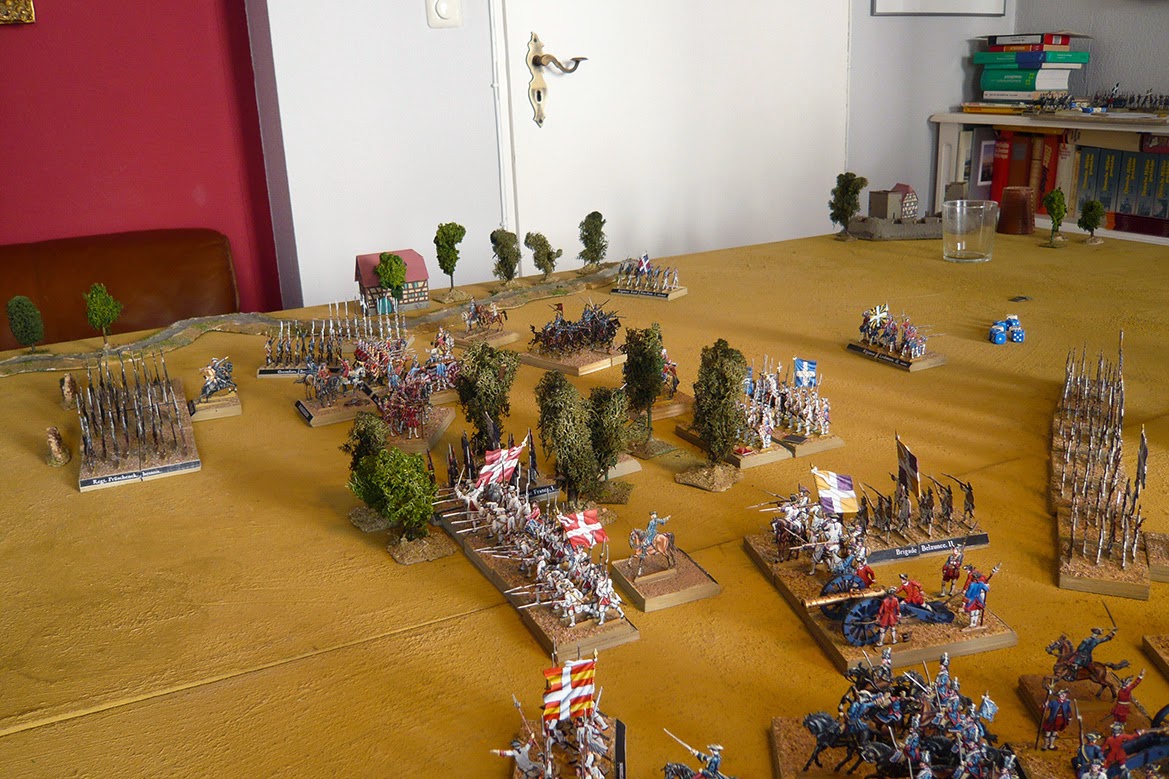 Just this small bit after the French had cleared the terrain to their front. Holstein's cavalry now gave way and moved off into the direction of Wangenheim's left wing troops. Nearly at the same time, Broglie's corps was entirely smashed as a result of a foolish flaw of mine. Never attack artillery with poor quality troops I learned – but ignored that day. No problem. The main area of the fight now shifted towards the French left anyways. 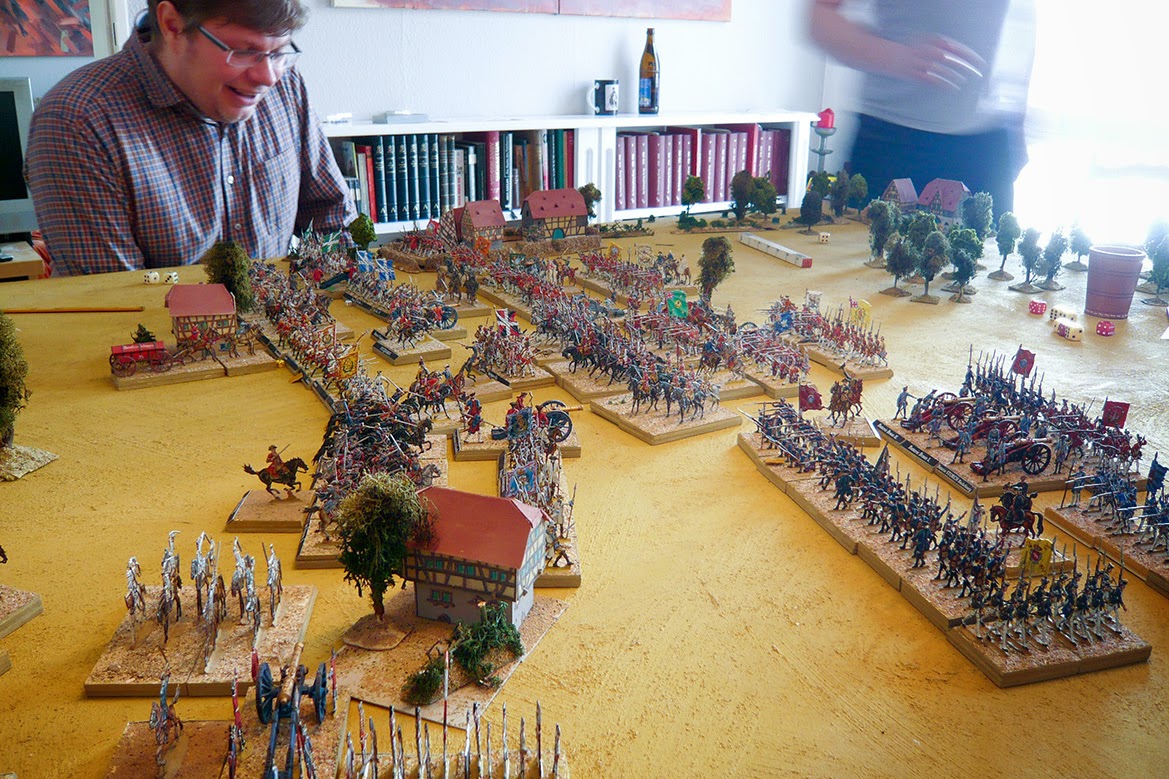 After V*** had finally completed his most elaborate deployment process, he gave orders to have nearly the entire force of Ferdinand attack the French left resulting in the single most massive clash I can remember in my wargamer's life. I love the above image with all these densely packed miniatures of mine. About an hour later, hardly anyone was left. The bulk became casualties. The end result can be seen with below image that shows the final stage of the battle. Holstein's cavalry along with Bevern's, so far not committed, reserve of Grenadiers managed to turn the French right and attacked the French in the rear. No problem again. We still had plenty of troops left to deal with this rather minor issue. 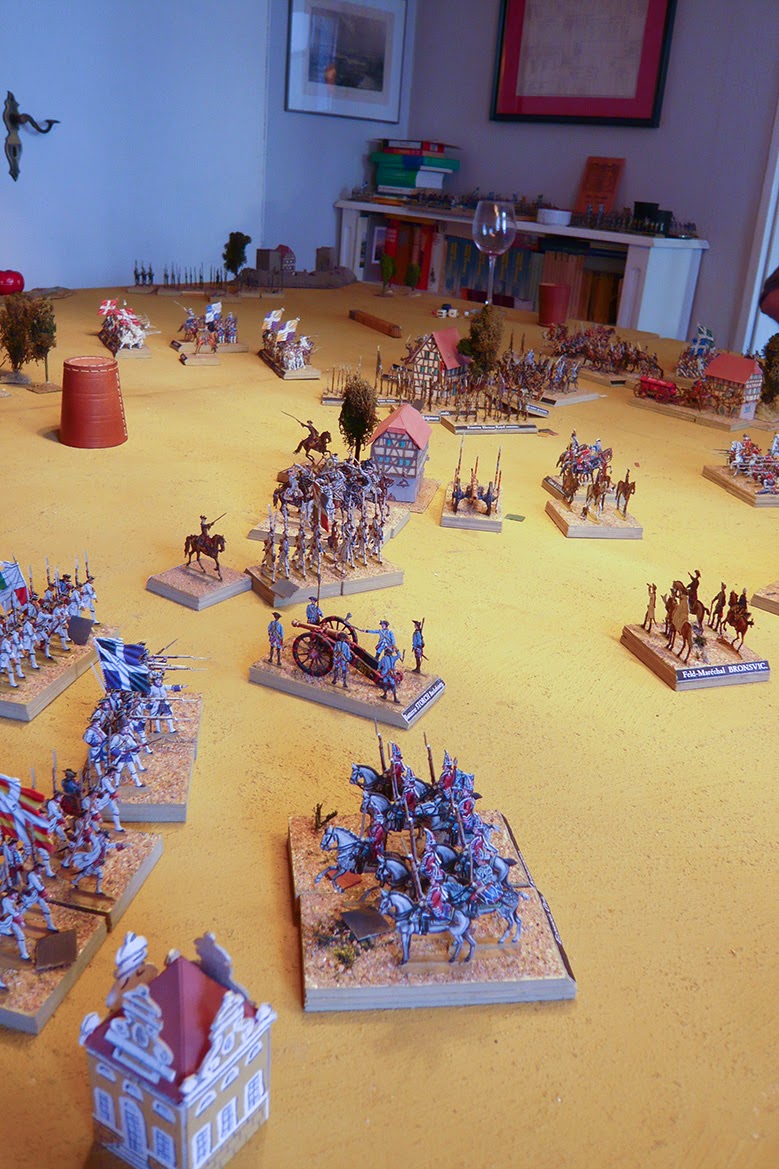 Victoria to the arms of his most Christian Majesties Army in Germany.
This game was fought using Volley&Bayonet rules. My scenario orbat sheets for the two opposing armies are added below. To my delight, the bulk of the troops are really authentic. With the Allied orbat, I have accounted for the grand guards of Ferdinand's army, that had been under the command of the prince of Anhalt that day. He was the "general of the day" and was ordered to recapture the village of Hahlen. His force was really the combined piquets of the line, while they are represented as Jagers and Hussars with my orbat. 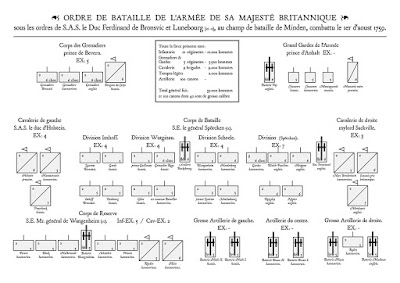