Finally, 3 years after presenting my research on the single French design howitzer construction of the SYW period, I managed to do my own scratch built model of the piece.
Its a heavy battery gun, not likely to see employment in a moving engagement. Its certainly not a field gun. 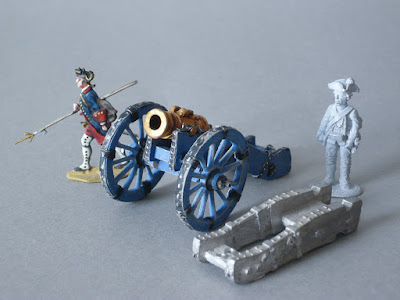 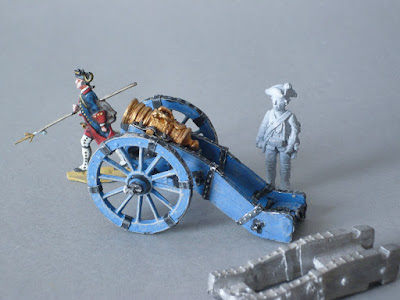 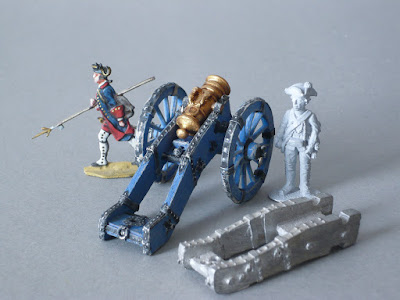 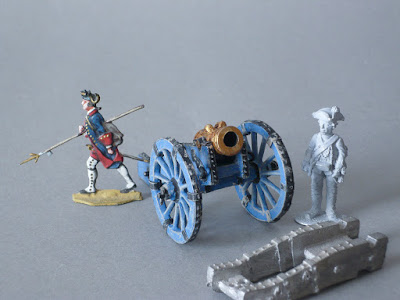 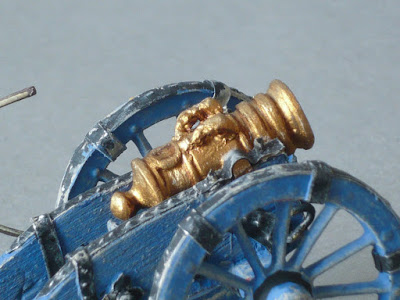 Close-up view of the barrel, which is a conversion of a model supplied by MiniFigs I purchased many yeas ago. I added sculptured dolphins and 2 rings on the chase using ‘green stuff’, based on my earlier illustration of this piece seen below. 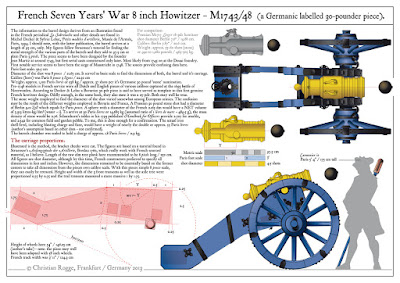 MiniFigs did a rather good job, as their take of what should be an 8 inch howitzer is a rather dead-on-target match to the French model. I believe their template was either the French Gribeauval M 1767 or a similar English model of the same period. Anyway, the barrel is rather dead on with the earlier French construction as can be seen below with my print-out to scale. 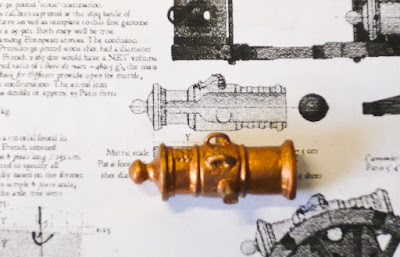 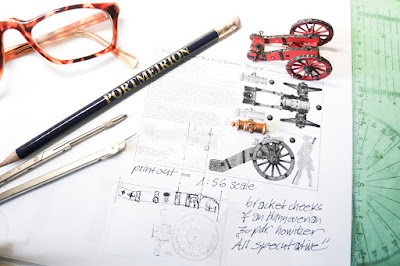 An earlier scratch built howitzer model of mine wasn't all that bad as well. I will use this one to turn it into an Hannoverian 30-pdr howitzer, which is likewise a 8 inch class piece. The bracket cheeks will be replaced by a Danish design of this period. My gut instinct says, Hannoverian designs may have been rather similar.

There is also another interesting source illustrating a French howitzer, unfortunately incomplete. 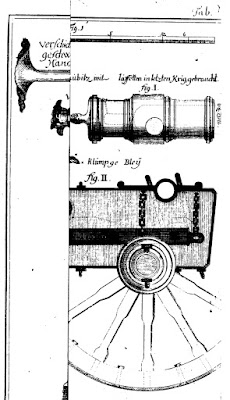 The afore illustration along with some rather interesting information about French artillery material, actually being fielded during the SYW in Germany derives from an appendix found with the German 1766 published translation of the French original book by Le Blond, L'Artillerie Raisonnée, etc., first published Paris 1761. The appendix is the German editor's/author's add on, missing with the original French edition. The author was a certain Johann Wilhelm Jäger, Ingenieur Capitaine-Lieutenant and appointed Master of Ordnance of the Burghers Arsenal of the City of Frankfurt/Main. His illustrated barrel is a 6.5 inch piece, as per its caption. The somewhat cropped line should read 6 1/2 Zoll, to my understanding. Thats interesting. Apart from the 8 inch model, I have read only of 16 pounder models fielded in 1760. This 6.5 inch piece would be a 12 pound stone class of howitzer, rather then 16 pound stone. Possibly this isn't a French manufactured piece, but an import. Possibly purchased from Nuremberg?!?. In any case, I will try to get copies of the entire foldout sheets from the library which keeps the original book.

Next, I also did 4 ammunition carts for my French artillery. 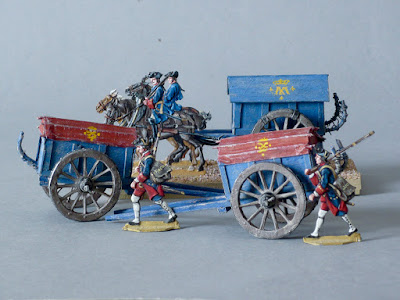 The below draft served as template for my three French carts. 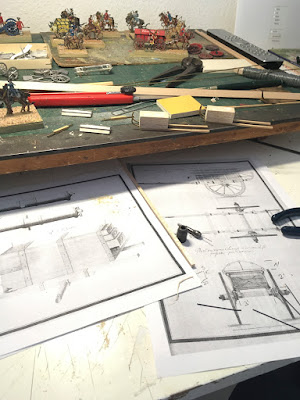 The wonderful draft gave me the dimensions. The two models with the red coloured wax cloth covers were done according to the draft, more or less. The other with a wood construction cover I did according to the carts seen in the right background on the below oil painting. It has the drafts recommended dimensions with the ammunition container measuring 2h x 6l x 3w feet and the cover with a height of 1 foot. The two earlier ones with the wax cloth cover are slimmer with a width of only 2 feet. 3 feet lookod odd to me in the beginning, but now I believe 3 feet is just right.

There was also a 4-wheel construction found as per the below draft.
Also interesting is the below drawing – albeit incomplete and somewhat more scetchy – it is rather similar to the above construction. It also provides a view to the way the ammunition was stored inside. This sheet is also found in the afore mentioned Jäger appendix. 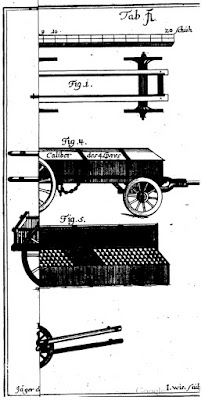 Most oviously, this 4-wheel construction was used with the French ‘Swedish’ light 4-pounder battalion gun, for it also carried a share of musket rounds, stored in 50 round packages, in the centre box of the wagon. As per Jäger's caption it held 70 container boxes for an equal number of cannister rounds in the front part, and apparently the same number of boxes for shot cartiges in the rear, or a total of 140 cannon rounds, not including the ready ammunition stored in a coffre carried on the pieces limber (unfortunately undisclosed with the google library copy). This caisson entitled wagon is illustrated with a cover made of thin zinc plate instead of the former custom wax cloth, to provide better protection against fire. During an action somewhere near Cassel, Jäger explains, an Allied howitzer shell exploded near one of these caissons with the shells burning fragments setting the caisson aflame resuting in it exploding and killing a many men from among the nearby standing infantry battalion. Most apparently, this story does allude to the elsewhere documented incident at Korbach, 10 July 1760, were precisely this happended to a battalion of the regiment Auvergene. Seen from Frankfurt, Korbach is indeed ‘somewhere near’ Kassel. Therefore I would assume this sheet metal cover caissons must have first seen servive with the 1761 campaign. I think I will do 1 or 2 of these caissons as well.

Above miniatures are from a wonderful series of casts of French train wagons and draught horses. I hope Kieler Zinnfiguren still sells them. I will need a whole load of them.
Posted by My 7YW at 01:47