After more then a years interruption I finally managed to continue with my artillery project. Job has kept me too much occupied during the last year, but with the start of last years Christmas Holiday Season I managed to do several more illustrations.


As said before, my main intention is to draw the various cannons and howitzers from several 7YW period Armies all in same scale inorder to supply myself – and anyone else interested – with a ready idea on their dimensions. Overall as well as comparatively to another. An image sais more then a 1000 words, a German proverb goes. After all, most of us wargamers or miniature collectors spend much effort in getting the drummers lace of a particular regiment the right way, but when it comes to select the gun models for a particular army that would be most authentic, matters will soon become difficult. For most part because the available information on this subject I found to be so limited, really. Often, it includes a lot of errors. Result of it all is that most models for 7YW Prussians from German foundries more often supply models based on post 7YW data. For the Prussian 1759 onwards mainstay ‘Austrian-style’ 12-pdr. they simply forward an Austrian model with a ‘Prussian’ limber that would mount a munitions chest as opposed to the Austrian limber that comes without it. Now, that‘s all nonsense.
I started with what will likely be the biggest piece that will have to fit onto my selected sheet format.  It is the French Vallière 24-pounder heavy cannon M1732. 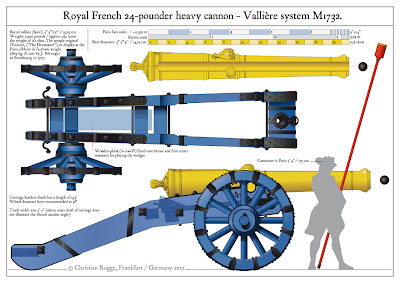 With the cannonier placed next to it, this cannon turns out to be a real biest. I found it irritating, initially, and checked scales oncemore to see wheather I got something wrong. But, no – there you are. Dimensions are correct. I have changed my mind and decided for a blue furnish, rather then red. The issue is discussed at Kronoskaf Seven Years War Project at http://www.kronoskaf.com/syw/index.php?title=French_Artillery_Equipment#Gun_Carriages
I decided to follow this more recent French research.
My draft is based for most part on the wonderful material provided in the contemopray German book on gunnery by Struensee, Carl August; Anfangsgründe der Artillerie, Leipzig and Liegnitz, 1760. It provides detailed drafts of the 24-pounder carriage along with an elaborate explanation as to how the dimensions are found. It also provides a detailed table with the dimensions of all other carriages that are to mount the 16, the 12, 8, and 4-pounder of the Vallière ordnance.

I do not know Struensee‘s source for these tables, but his dimensions roughly agree with the more general details provided in Guillaume Le Blond, L‘Artillerie Raisonnée, Paris 1761, and the principal French source on the subject by Surirey de Saint Remy, Mémoires d‘Artillerie, first published in 1697, and a revised edition in 1745 by Guillaume Le Blond.

It should be noted that during this period no universal system for the construction of carriages existed. The artillery administration of France was divided into several districts among which that of French Flandres located at Douai and that of Germany located at Strasbourg would have been the most important ones. Each district would assemble its carriages according to its own accepted custom, resulting in somewhat varying dimensions for the overall length of the carriage as well as different heights for the wheels. We should also assume many variants with the metal fittings could be found. See below illustration of 24-pounders in action, found in the French Esquisse Historique de l‘Artillerie Française, by A. de Moltzheim, Strasbourg 1866. 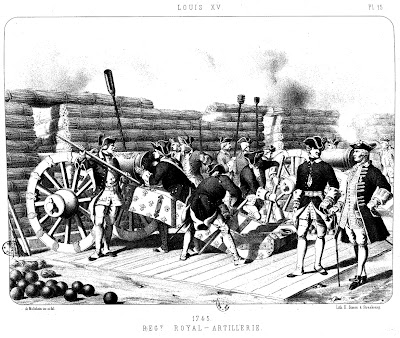 Not sure if we really see Vallière pieces here, for the artist skillfully placed a gunner in front of the two cannons cascabel sections, thus, refuses us an easy identification. But even if these 24-pounders are from the pre-1732 Vallière range, the dimensions were basically the same. Both were 10 foot barrels.

The Vallière cascabel of the 24-pdr. usually featured the face of Bacchus or Hercules. See below cascabel of an original barrel seen at the Paris Musée de l‘Armée with my recent visit November 2011. It served as model for my draft. 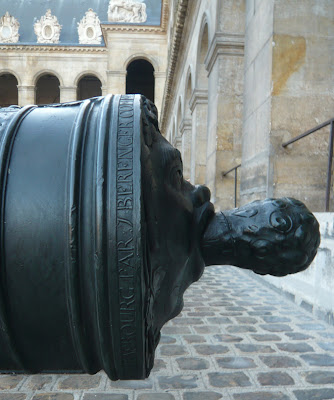 It is the barrel named L‘Eeclatant (should translate to ‘The Devastator’), cast at Strasbourg by the founder J. Berenger in 1757.
This museum is truely one of my most favorate places in the world. I love being there. For me, a visit turns into near paradise if it‘s combined with a lunch at trendy Café de l‘Esplanade. Really, this is damn close to my take of Paradise when you are enjoying a tasty Beef Tartar along with a bottle of Chambertin - Napoleon‘s preferred brand of whine - and all of this in combination with a perfect view on a giant battery of bronze barrels. 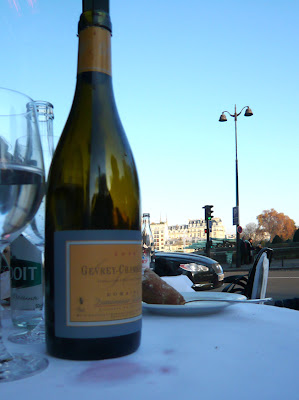 Now returning to the topic, here is my next sheet. The French short Swedish-style 4-pounder which served as French bataillon gun from 1757 on at a ratio of one piece per line bataillon, and the long Vallière 4-pounder field gun. 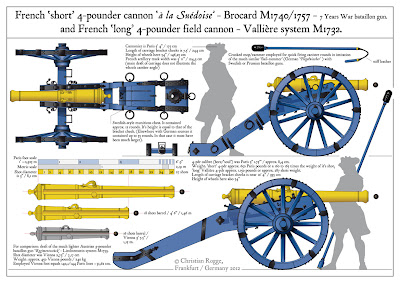 The Brocard 4-pounder I have done anew and added some more detail. This pieces carriage initialy came with a vertical elevation screw beneath the barrels breech.
The Vallière 4-pounder was the mainstay of French position artillery during the 7YW amounting to more then 50% of the field artillery‘s total for most of the war and not including the bataillon guns here.

This illustration is based on the drafts in Memoires d‘Artillerie, 1745 edition. However sources say the machinery was found being vulnerable to damage, so that that later models returned to ordinary wedges for laying the piece. 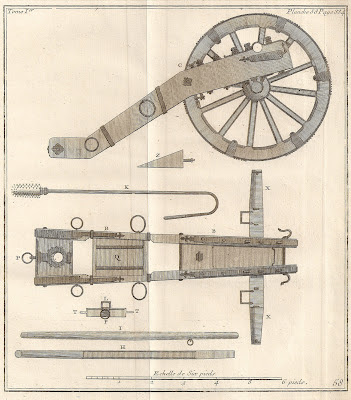 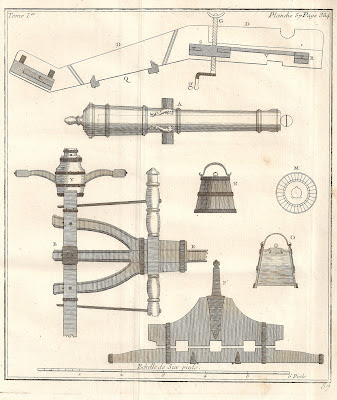 Above 2 sheets are the illustration of the French Swedish-type 4-pounder from the original Mémoires d'Artillery, revised 1745 edition by Guillaume le Blond.
The images were forwarded to me from France only in August 2012, long after this article was edited.
Below find the two 4-pounder barrels examined in somewhat more detail. 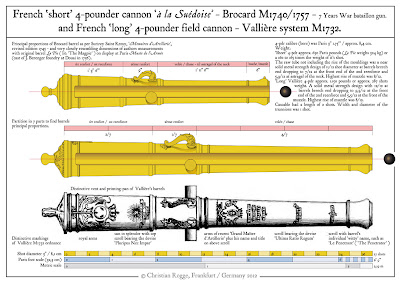 The barrel of the Brocard 4-pounder should have featured the same insignia as those of the Vallière range. La Pie at the Paris Museum, though, comes with a cloud darting lightnig flashes instead of the arms of the Grand Maître d‘Artillerie. Not sure if this was an exception or the rule.
The Brocard piece saw first empolyment during the War of Austrian Succession. Maréchal Belle-Ille‘s army of 1741 fielded them in place of the long 4-pounders in an attempt to lighten the artillery train as it embarced from Strasbourg to Bohemia. A reserve of 20 or so pieces saw action at the battle of Fontenoy in 1745. It‘s designer/constructor, captain Brocard was killed in this battle.
Below see for an image of a Vallière 4-pounders cascabel on display at the Paris Museum. It served as model of my draft. 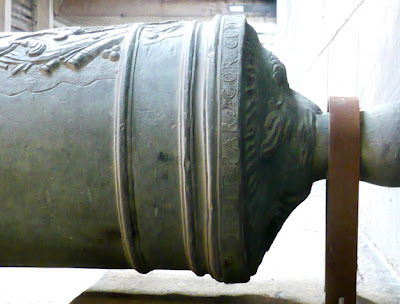 Below I have arranged a number of barrels to give an impression of their dimensions to another. They serve also to give a first taste on the distinctive looks of ordnance fielded by a particular nation. 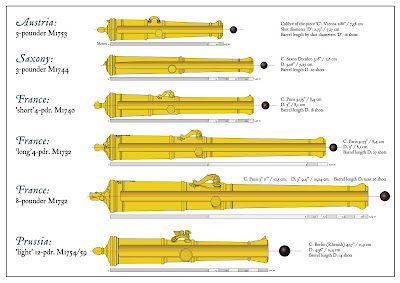 Note the rather massive muzzle design of the Austrian M1753 pieces as opposed to the somewhat less massive tulip or pear shaped muzzle of French ordnance. The Prussian barrel with it‘s distinctive griffins instead of dolphins and a muzzle that has an odd conic shape are distinctives for all Prussian cannons fielded during this period. It gives a good idea of all this talk about Prussian artillery being designed so much lighter then that of most other nations. The Saxon 3-pounder, however is a tentative and speculative reconstruction on my side. Will do an extra post on this piece within short. The monkey face sculptured cascabel of the Vallière 8-pounder was seen with an original barrel found at the Vienna Army Museum last November. 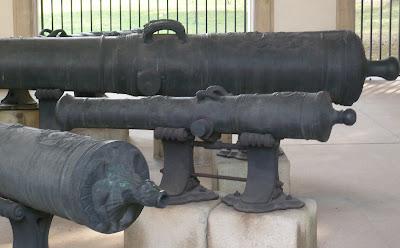 The other barrel in the centre is a Brocard 4-pounder. Note this barrel has a rather flat shaped base behind the barrels breech. The Douai cast La Pie is more rounded.
Unfortunately, I couldn't get any closer to the pieces in Vienna then this. The museum has a fantastic collection on display at the so entitled Artillery Halls section of the Museum. I visited on first Sunday in November and learned this section is closed for visitors from November through end of March. You can imagine how frustrating this felt. I will have another visit upcoming April for sure.

Below see the draft of a Vallière 8-pdr. 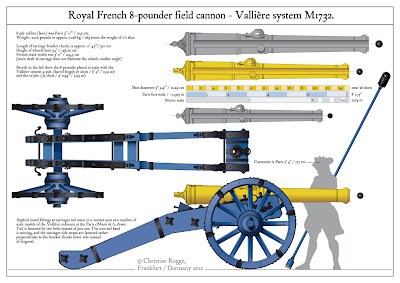 I should note that the tables of dimensions for French carriages in the afore mentioned book by Struensee advises 58 inches wheels for all of the Vallière system cannons. I decided to illustrate the 4 and 8-pounder with 54 inch wheels as per the Strasbourg arsenal figures provided in the 1697 published St. Remy book mentioned above. Just the 12 to 24-pounders have the larger diameter 58 inches wheels.
Next sheet illustrates the 12-pounder placed next to the 8-pounder for easier comparison of the dimensions. 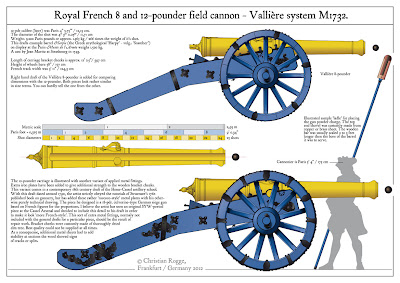 Both pieces are of near similar dimensions to my surprise. I knew about the plain figures before, but you can only catch the dimensions if you actually see it or have some sort of visual reference. 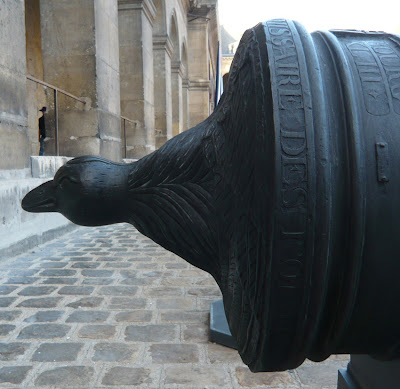 The cascabel design of the Vallière 12-pounders featured a rooster or cockerel head. My draft is based on an original barrel seen at the Paris Museum. It is the piece named Le Harpie (the Greek mythological 'Harpy' – vulg.: 'The Snatcher'). Cast by the famous Swiss origin Jean Maritz founder at Strasbourg in 1743.
My initial learnings from it all can be summarized with the short conclusion: Size does matter. I need bigger gun models!
Now, only the 16-pounder and the 8 inch howitzer is missing to provide a complete illustration of the French ordnance fielded during the Seven Years' War. I hope to publish them within soon.


To complete the range of the Vallière M1732 cannons see below illustration of the 16-pounder cannon and photos of an original 16-pounder barrel on display at the Paris museum which serves as sample of my cascabel design. 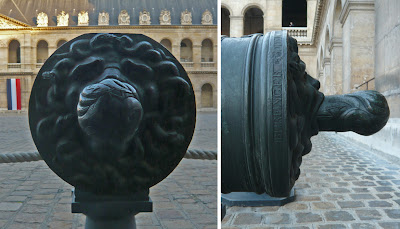 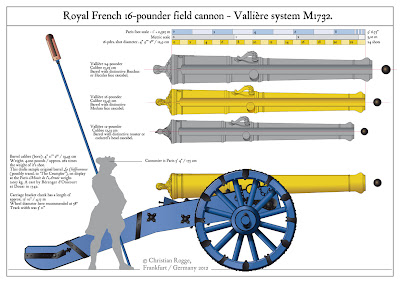 I also placed the 12 and 24-pounder in scale to this piece and only now realized the overall dimensions of all 3 aren‘t particulary worlds apart. I must say, when starting the project, I was shackeled by the common prejudice long barrels belong to the early 18th C. period, while by the mid 18 hundreds barrels had mostly arrived at much shorter length. My so far research revealed, this is altogether a wrong assumtion. The French ordnance we have here wasn‘t so much different from that of it‘s most formidable Seven Years War opponent - the electorate of Hanover. This nation fielded 12-pounders with a length of 24 calibers and 6-pounders of 27 calibers as heavy position artillery during all of the 7YW. Also the Prussians had plenty of similar dimensioned pieces such as the famous 12-pounder Brummer (Engl.: Growler) and also heavy 6-pounders with 26 shots barrels from 1759 on. The only real difference was that these latter Prussian pieces were really siege guns, but as it turned out, did do good service also as field guns.
The Vallière system did not make a distinction between siege and field guns at that time. With my next article, I will try to provide some figures that allow to estimate the quantity of the various pieces fielded with a typical French army of the Seven Years War.