Recently I have turned my attention to the research of 7YW artillery.

I decided to turn my past and future findings into a series of scale drawings that are meant to serve as reference to any sculptor for creating new models. Certain ranges of ordnance are fairly well known and good  models are out already, but for others, it seems, not much had ever been published. I already received 2 requests from sculptors for support during the last year. The entire subject is very interesting and illustrating the guns is a great pleasure.
I decided to start with the French artillery as I have most information on it. It will be a good start for learning and pushing deeper into the subject. Austria will follow. Thereafter I will turn to Prussian ordnance of the period. This will be somewhat more challanging as only few original scale drawings could be found. A lot more written details are around, though. 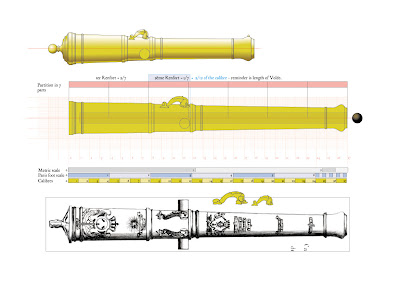 Above image shows my work-in-progress illustration of the French M1732 Vallière 4-pdr. The upper finished barrel is the Brocard ‘Swedish-type’ 4-pdr that served as bataillon gun of the French line infantry during the 7YW. More on it further below. The altogether more formidable dimensions of the standard Vallière 4-pdr are obvious. With 7YW period sources it is often referred to as the ‘long’ 4-pdr with a barrel of Paris 6' 9'' or 27 calibres as opposed to the ‘short’ Paris 4'6'' or 18 calibres French bataillon gun. Note, as a general rule, for specifying the length of a barrel only the tube was scaled, the rear cascable and button being omitted. Furthermore, also the strength of the barrel walls were different. The Vallière barrel follows the ‘classic’ system of around 1700. That is to say, the strength of the barrel walls at the rear of the 1st Renfort equalled 1 calibre or 12/12 and decending to 5.5/12 at the front of the muzzle. This was called "vollgütig" (solid cast) in German gunners jargon. The 1st half of the 18th century in particular saw a great deal of experimenting and modeling to find the best length of a barrel and the best strength of metal from base to muzzle. Result was that a 4-pdr could end up arriving at very different dimensions, despite all being referred to as 4-pdr cannon. Prussians pushed affairs here to the limit - and beyond. In short, a 12-pdr wasn't a 12-pdr - i.e. they were not necessarily all alike. My research intends to add some clarification here. 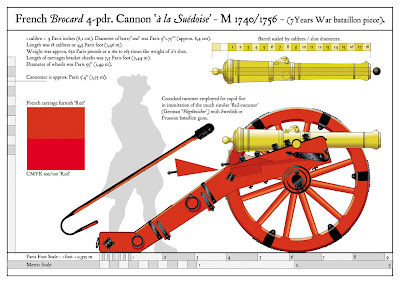 This is the first of my Ordnance Data-Sheets. The French bataillon gun of the 7YW complete with carriage.
Nigel Billington was a tad faster with publishing on his blog. I noticed that with his image, the red furnish of the carriage comes out much like the stanard NYC fire department red. Not particulary the shade of red I had in mind with my illustration. To this end, I added a colour key to the sheet. 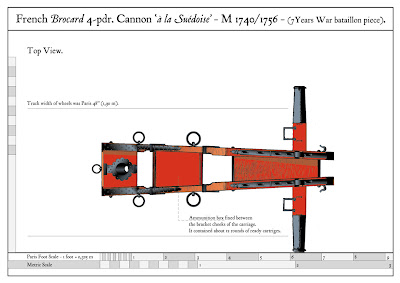