My Artillery Research is taking a Holiday Season Break for a while. I thought of returning to my core business – that is painting miniatures. 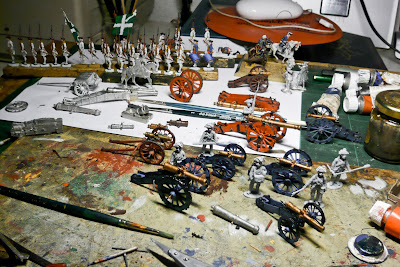 I received the first sample gun models by US based Fife & Drum Miniatures (FDM), as well as from Berlin based Black Hussar Miniatures (BHM).

This got me rather excited and I thought of sharing my first closer look at the fruit of all my earlier research – for all these new range models claim to be sculptured based on my drafts.
Below are the three Prussian beauties, we'll now have a closer look at. All are 28 mm or 1:56 scale. 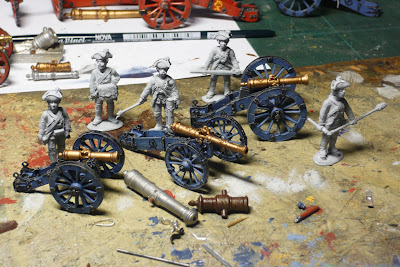 Left is the Prussian Holtzmann M1740 3-pdr by FDM, centre is the much longer barrel Beauvryé M1746 3-pdr by BHM, and right we have the Dieskau M1754 light 6-pdr by FDM. BHM also sent me their set of 5 Cannoniers along with the limber. You see the Cannoniers dressed in grey primer. The limber, I haven't painted so far. You'll see it on the first image upper left background. The Cannoniers are fantastic in detail. You cannot get a Prussian gun crew more authentic then this one. Gunner No.1 with the rammer of course works with battalion guns only. His gorgeous crocked rammer was used for the light pieces only.
Now, back to the hardware and talking pure cannon issues: All have done a wonderful job. The models are dead on scale, niclely sculptured in detail, and should be about the most authentic Prussian SYW models money can buy. 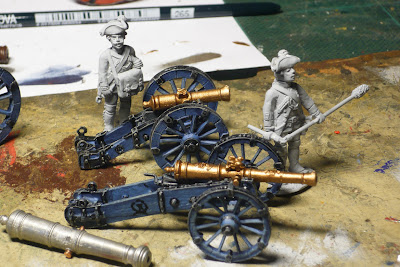 The two 3-pdrs at somewhat close view. The wheels of the BHM piece could be 2 mm or so taller to my taste, while those of the FDM could be a tad less massy. The FDM pieces are also missing the trail rings. Possibly for production matters. I added my own scratch made ones to the FDM models. The track width of the FDM 6-pdr is clearly too generous. The barrel of the BHM piece is the most pretty sculptured barrel I have ever seen. Very detailed, and all very accurately done. But, honestly, comparing the two we are comparing Ferrari's with Maserati's. 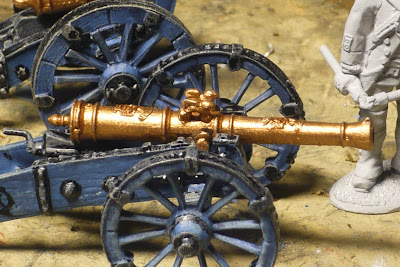 The BHM 3-pdr barrel in close-up view. I was told, late 3D printer technology was employed for the accurate end-product. 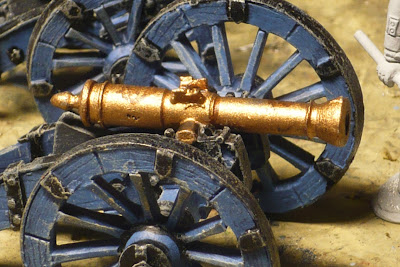 Close-up of the FDM 6-pdr. Very nicely done. The muzzle swell is greater then it should be, but it does no harm to its visual presence. This way, the barrel's silhouette won't fail to look Prussian by its first glance if seen from some distance.

And while I was at it, I also assembled & painted a Prussian 12-pdr from Austrian based Diez foundry. Its supposed to be a medium M1758 ‘Austrian-type’ piece, as the barrel has the same length as this foundries ‘real’ Austrian 12-pdr (seen laying in the foreground). 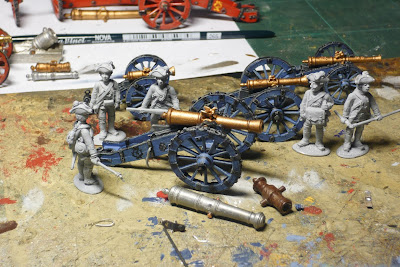 Some minor corrections had to be done here. I removed the trail rings, which did not come with this heavy position gun. Also the two Centre and Base Transoms are placed too low. 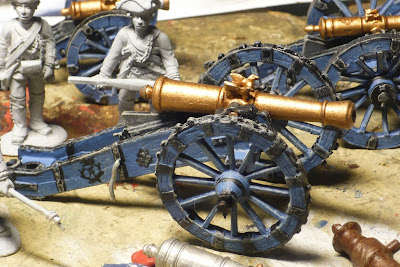 I had to add another wedge serving as base to its  Richtmaschine. The carriage really is M1761 or 1766. A very similar forerunner may have been introduced in 1759 and may have been the carriage to the M1759 ‘Austrian-type’ 12-pdr. This model, though, had a barrel which was about a muzzle length longer.
Here is another piece I just finished. Foundry is unknown. 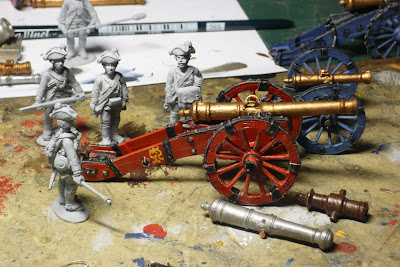 Originally, it seems to be a battery culverine for the period 1600-1700, but it makes a perfect heavy 6-pdr with a barrel 27 calibres long. The barrel could be a tad slimmer, but its length is near on scale. A mm less would be dead on. Fine enough. I made it a Hannoverian piece, as they fielded such long barrel 6-pdrs in great numbers. For a Hannoverian 12-pdr the barrel would be too short, as well as the wheels would have to be taller. It makes a nice heavy field gun 6-pdr. I also labeled it with the makings of King George II on the bracket cheeks. I know all of the ammo-wagons bore the crowned GR initials, so I would believe, the gun carriages had them as well. 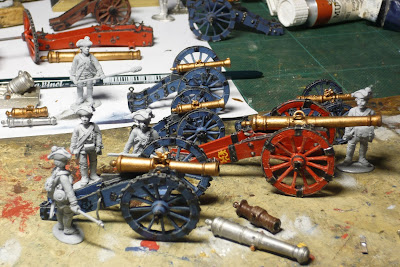 Another view of all five pieces being discussed.
Posted by My 7YW at 12:42