Let us return to the Prussian 12-pounders fielded. This particular calibre saw the widest range of models designed and fielded during the Seven Years' War. Of my earlier presented Holtzmann M1738/40 piece, but few saw service, really, for lighter models had been designed and cast from 1743 on. For the campaigns of 1756 and 1757, the two below models formed the core of Prussia's 12-pounder field guns. The two next sheets will present the guns in an increased scale– and with French headlines. The latter is meant to be a salute to my Blogs considerable French reading audience. 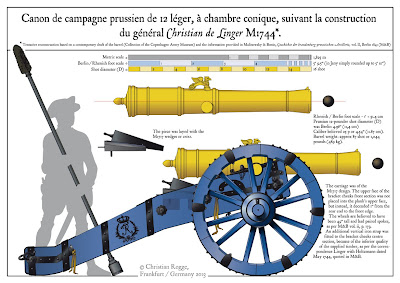 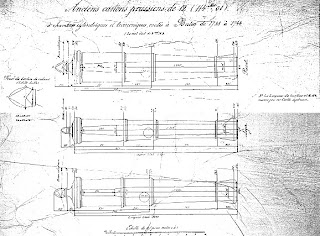 The above contemporary drawing, belonging to the Collection of the Copenhagen Arsenal Museum served as the template of my “Linger 12-pounder”. The light design is the centre barrel with the original. The sheet is French headlined: Anciens canons prussiens de 12, à chambres coniques et cylindriques, coulée à Berlin de 1738 à 1744. The adjective "Anciens" (i.e. "former") implies, the copy was done after the Seven Years' War, illustrating constructions "formally" in use with the Prussian artillery. From 1759 on, no chambered bore guns were cast anymore, as the Prussians returned to the more massive common bore designs. The top and bottom barrel can be identified as Holtzmann designs of 1738. The slim centre barrel may either be the lighter Linger or Holtzmann piece. No other designs are recorded for this period in M&B. The drawings concentrate on the principle dimensions, only. The holds have been omitted by the artist, to my understanding, for all Prussian guns had sculptured holds in the shape of griffins or eagles during this period until the Dieskau designed 3 and 6-pounders of 1768. Also most barrel designs by around 1756 would still have the astragal of the vent, while some were already missing the astragal of the chase. Only with new designs during the Seven Years' War – and after – the astragals were omitted as can be seen with the many original barrels of post 1770 casts on display in several museums to the present day.
I have not taken the effort to do a mass calculation based on the given dimensions, for the poor image resolution does not serve to give reliable figures. I'm left with informed guess approximation. I have done mass calculations for the next piece presented, and its attached discussion will give an insight to the sort of figure-wise embarrassments you are likely to be confronted with. This method of approach to find, or at least verify, the true dimensions is furthermore offset by the fact that recorded draft based volume or mass figures of a given barrel often fail to match with cast originals found in todays museum collections. Deviations of 50 or 100 and more pounds, even with lighter 4 or 6-pounders, seem to be the rule, rather then the exception. And it is not false or confused ancient weight figures employed, that make for the funny results, but it should be common deviations found with this periods method of manufacturing in general. In short – mass calculations will serve for some way, but unfortunately not all the way, as I found out with my extensive research. Don't be unsettled by conflicting weight figures, but be on your guard when faced with conflicting general dimensions. The latter should make a close match in any case. A told 16 shot barrel should be 16 shot barrel, and from my numerous measurements done at a good number of original barrels, I can say it holds true – by accepting deviations of plus/minus 1 cm or 0.5 inch. 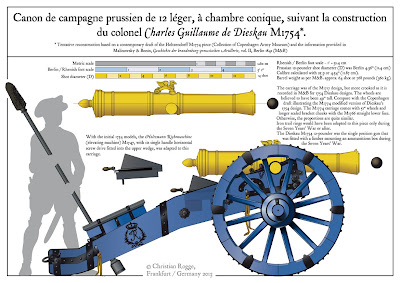 The next, and rather important design, is the Dieskau M1754 light 12-pounder. It was the lightest – and latest – construction fielded with this branch of position guns at the beginning of the Seven Years' War.
It formed the mainstay of 12-pounders of Frederick's army of Saxony in 1756. The piece's testing complied to the demands. Its shot carried over 2.000 paces. As per the Royal Ordonnance of 25 Nov 1754 (Jany, vol ii, p. 257) it was to become Prussia's single future 12-pounder design. Serial casts commenced during Spring 1755 at the Berlin foundry, replacing the same number of 1740's cast 16 shot length cylindrical chamber bore 12-pounders. 30 pieces to Dieskau's 1754 design plus ten more of the older Holtzmann design contributed by Ferdinand of Brunswick's right wing army group joining with the Magdebourg district regiments were with the Royal Army invading Saxony in 1756. Feld-maréchal Schwerin's Army of Silesia had the older 1740' cast 16 shot length Holtzmann and Linger model 12-pounders, only.
The design of this 14 shot barrel, I investigated in somewhat more detail, for the sources are confusing the known total of 3 different designs, that are all based on the initial 1754 Dieskau construction. 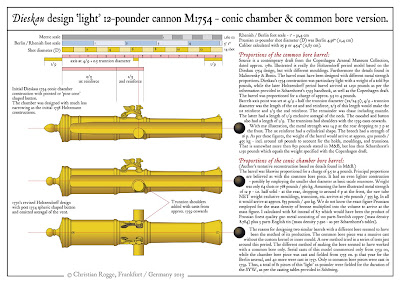 The remaining pieces forming Prussia's heavy position artillery in 1756 were the light 24-pounders and few 10/11-pounder howitzers and gun-howitzers.
The two next images are the Copenhagen Museum Collection's draft of the post Seven Years' War model fielded during the 1770's. 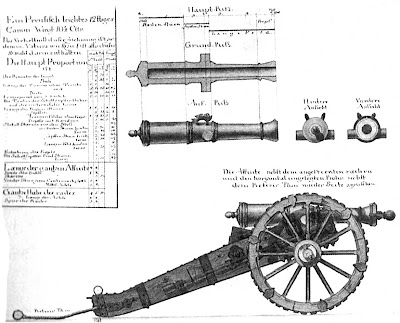 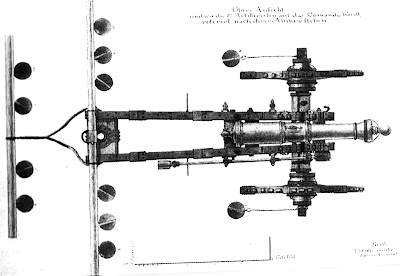 Above plan view illustrates the manpower required when retiring the piece.
The so far presented models formed the Prussian artillery in the campaigns of 1756 and all through 1757 until the battle of Leuthen, 5 December. With this battle, the Prussian's dropped all of  their innovations of the past two decades. Contrary to her adopted doctrine, which relied on very light field guns only,  they reanimated a collosal ‘biest’ from the old ages of gunnery. It is illustrated with the below sheet. The reason was the alarming shortage of heavy guns. Most had been lost during the retreat from Bohemia during the Summer and the further losses with the Prussian reverses suffered at Moys and Breslau. It was sheer desperation, that caused the Prussians to add these obsolete ordnance to the artillery parc. 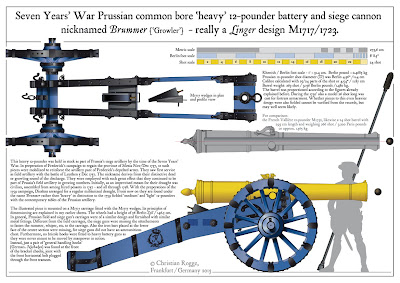 The piece is really a design based on 17th Century state of the art. It was thought impossible, that guns of this weight could keep up with the pace of the advancing line in a given moving engagement, but on the day of Leuthen, it seemed to have worked fine. The time of season may have helped to provide for the required firm ground. From recorded correspondence, Dieskau as well as Frederick confirm the enormous difficulties of moving the pieces in action. More often they served for no other than an initial preliminary bombardment of the enemy positions and ceased to take any part in the further action once the line started to advance.
However, with Frederick's instructions 30 June 1758 concerning the management of the artillery in case of a battle, directed at his artillery commanders Dieskau and Möller, he intended to have 20 such pieces forming part of a giant 40 cannon grand battery sustaining the attack and keep the pace with the attacking wing of infantry. The original French text is included at the end of this article.
The below sheet shows a similar weight 12-pounder of the Royal Danish ordnance of 1706. Its dimensions are nearly the same.
The Danish artillery had adopted the odd conic shaped muzzle design somewhat earlier then the Prussians. It is likewise a 24 shot barrel. The foot scale employed with Danish gun construction was also the Rhenish or Cologne foot scale from the 1680's on, and as a result, Danish calibre scales should have equalled the Prussian ones. The wheels have a height of 58 Zoll, the carriage's bracket cheek front face has a height of 3.5 shot and a length of 35.25 shot or approx. 400 cm (barrel length plus approx. 11 shot) – i.e. very similar to the Prussian M1717 carriage figures. It is just minor details that are different – most obviously the style of the metal fittings. Even the design of the wedges may have been not so different from the Prussian M1717 ones, though, the manuscript does not include any information on Danish wedge designs at all.
I took the effort to also illustrate a Brummer of the later design, of which an original piece with its original carriage is on display at the Paris Musée de l'Armée to the present day. 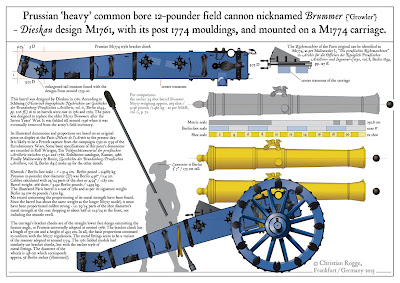 It has often been falsely identified. The English Wiki-Entry to the French Gribeauval artillery system even makes it a French 12-pounder! It is of course a Prussian cannon, very prominently displayed at the entrance of the museum. Having the opportunity to compare the two models, allows for a better separation and a true identification.

Here are a few pictures of the Paris original I took during my visit of the museum. 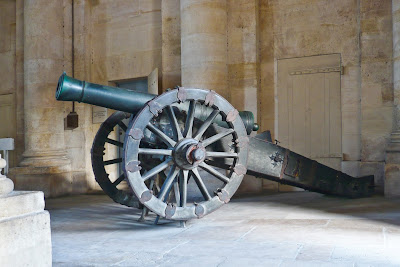 The piece has received the French olive green furnish at some stage after it had been captured. It may have seen service with the French army during the Revolutionay Wars or later. Or, it may have been simply the odd decision of a silly curator of the museum in later times. To my observation, some of the original – very weathered Prussian blue furnish – can be detected at the upper part of the naves. 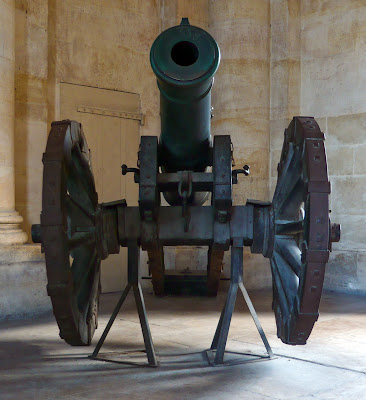 The front view. Note the metal sheets on top of the naves linking with the axletree. They were termed in German Kotbleche – in English something like ‘dirt sheets’ [?]. This item is found illustrated with the M1774 carriages. Earlier drafts ignore this detail. I cannot say at what date they have been introduced. 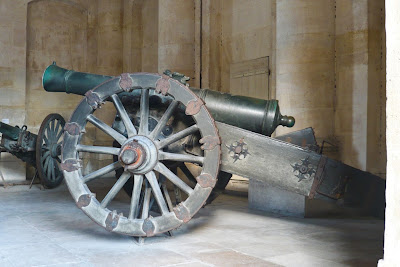 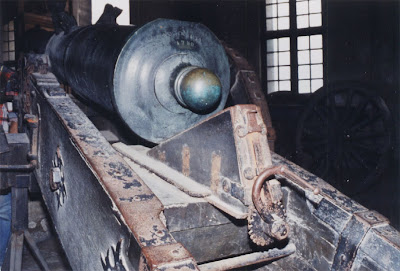 Here is a nice detail view to the design of the wedges. The original should have had a twin handle. Part of the machinery must have been lost. The horizontal iron bolt behind the lower face of the transom is clearly visible. On top the transom we see the placement of the lower wedge onto which the upper triangle shaped top wedge is fitted.