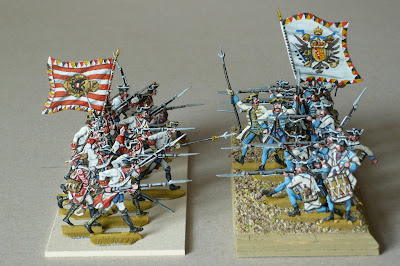 Two of my newly painted regiments of the Empress-Queen’s formidable army.

Purist’s will certainly notice two glaring deviations from the accepted regulation looks of 7YW so entitled ‘German’ regiments uniforms & insignia. I will have to expand on this: First are the blue vests despite otherwise red facings. This is based on the information given in Friedrich Schirmer’s “Die Heere der kriegführenden Staaten 1756 – 1763”, the German Pengle & Hurt, so to say. It states turnbacks in red facing colour and blue vest’s/breeches in 1757. I did white linen breeches, often worn during summer, instead of woolen blue ones. Sprecher’s uniform apparently still following earlier dress from the War of Austrian Succession period. There is indeed sound evidence certain units still had those older style uniforms in 1756 and 57. The below contemporary painting being such evidence. It shows the surrender of Breslau garrison 24 December 1757. 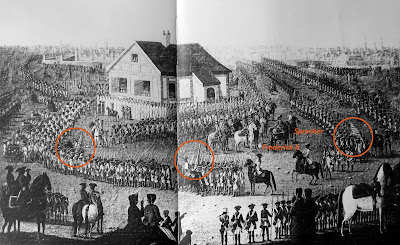 We are apparently witness of the moment the town is handed over by it’s commander baron von Sprecher, lieut. general. I believe it’s the gentleman saluting to the king. Though, this being my personal interpretation. Unfortunately I don’t know if there’s a colour copy of the original out. I only know of b/w ones. It was part of the collection of the former Breslau Provicial Museum and apparently did not survive the 2nd World War. This makes it rather difficult to say which particular regiment is just parading past the Prussian guards. 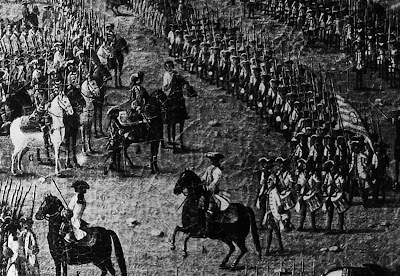 Note, this painting is by mistake subtitled as the 1742 surrender of Breslau elsewhere, such as in Betty Mitford’s “Frederick the Great”. There hadn’t been a garrison at all in 1742 that could have paraded out the city with all this pomp and circumstance as illustrated here. My copy derives from Hans Bleckwenn’s book “Unter dem Preussen-Adler etc.”. Mr. Bleckwenn dates it 1757 and takes it as rather authentic with regard to the Prussian uniforms we see. He doesn’t state much to the Austrian ones, besides being interesting to ‘connossieurs’ of the Austian army in particular. This regiment clearly has turnbacks, vests, and even breeches in facing colour. Note the officers and NCO’s do not have lapels. I didn't follow the drummers uniforms, that have white coats and livery lace on the arms. Mine is a "Moor" drummer and has a coat with reversed colours

Interesting is also the standarts carried by this unit. I decided for such a design that does not fit 1745 regulation pattern. I believe those colours in the painting are somewhat simplified on the artist’s side. I therefore used an example from an image of the 1745 “Hohenfriedberg trophies” from another souce that is based on the originals kept in the Potsdam Garrison Church then. It is white silk with red bars – the colours of the arch house of Austria – and the double headed eagle insegnia within a crowned golden cartouche. The Hungarian regimet Haller instead I did with a regular 1745 pattern white silk Life-Colour bearing the double headed crowned imperial eagle on the avers side (flag pole on the left) with the Emperor’s initials “FC” for “Francis co-regent” and “IM” for Roman “Emperor” and his crowned arms of Lorraine and Toscany in the centre enclosed by the chain of the order of the Golden Fleece. The revers side, instead, bearing the image of Virgin Mary. All regimental colours would have been of yellow silk and bearing the Emperors arms on the avers side, and those of the Empress-Queen’s arms on the revers side - that is the eagle without sword and cepter and the arms of Hungary on the left, Bohemia on the right, the arch house of Austria in the centre, and the initials “M” “T” for “Maria Theresia” within the eagle’s wings. 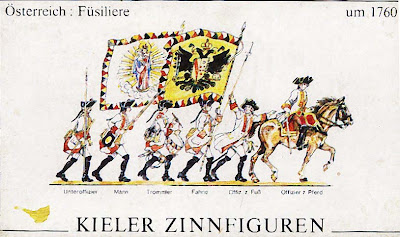 The above image being the cover of a miniatures box of Ochel's Kieler Zinnfiguren (www.kieler-zinnfiguren.de). Not sure if they still sell them this way. I liked the method of selling around 20 infantry miniatures in a box along with a painting guide.