Refight of 1741 battle of Mollwitz

For once, I took the opportunity and made a number of nice photos of last Saturday's battle of Mollwitz. A good part of My-Seven-Years-War Austrians & Prussians were gathered for an scenario, designed to introduce my 12 year old nephew to the realm of wargaming.  The game was played with Volley & Bayonet rules. The scenario loosely followed the 1741 Mollwitz situation. About 600 of my miniatures took part. An infantry regimental base has an average 16 figures, the cavalry brigade stand 10 to 12, and a battery consists of 5 to 8 gunners plus the piece.
The Prussians under young Frederic and Feld-Maréchal Schwerin were played by myself while the Austrians were played by nephew Karl. Initially it was to be under the command of count Königsegg, but Karl wanted to command en chef himself. Only minutes before commencement of the battle a courrier from Vienna arrived ordering supreme command to be transferred to "Prinz Karl" – alias duc Charles de Lorraine. To keep it short: I suffered a decisive defeat. Karl, only playing for the second time beat the old maestro. My brave Prussian infantry melted away under a series of most murderous salvoes on the side of the Austrian infantry. That day, my dice were no match to Karl's. 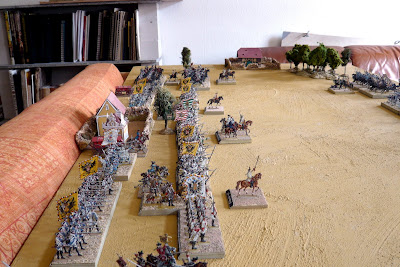 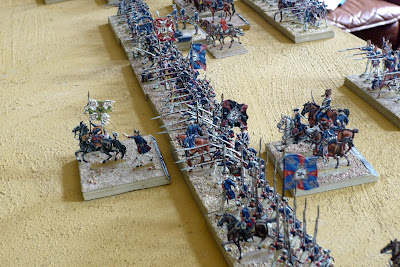 Close view of the Prussian infantry centre. The regiments IR22 prince Maurice, IR13 Itzenplitz – the crack "Thunder and Blitz", IR7 vieux Bevern, and IR19 marcgrave Charles. Maréchal Schwerin at the head of his army – at this time still very much alive – gives orders to advance. The battle started with a Prussian advance. Meanwhile, Frederic, the king, preferred to remain behind Itzenplitz. His suite consists of 2 Leib-Hussars H2 in winter dress, and an aide-de-camp. 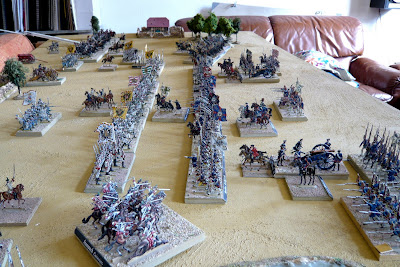 Now it was Karl to decide how to react to what seemed to be an all out frontal attack. Without hesitation, he gave orders to have his infantry boldly advance to meet the Prussians. Stampach's cuirassiers charged the grenadiers on the Prussian left wing forcing them back in disorder. A good start for the Empress-Queens troops. Next followed an exchange of long range fire from the infantry's bataillon guns, which did little damage to either side. 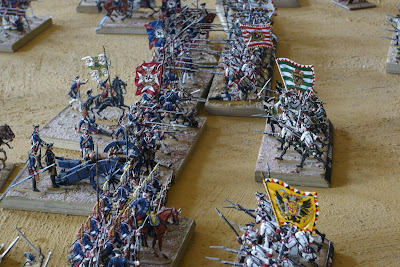 Now Prussians tried to decide the issue with the bayonet and closed in on the Austrian infantry. My cavalry was deliberately kept at a distance to the Austrian, for all of my horse were rated with rather poor morale that day. I had put my faith into the superior morale Prussian infantry. Above scene shows a detail of the infantry clash. Lower left shows Prussian Möllendorff grenadiers (converged IR 9/10) engaging l'Empereur. To their left, a battery of light 12 pounders (Dieskau M1754). Modell is by Diez foundry, Austria. Behind you see marcgrave Charles. It engages Kurmainz. Shortly after, Schwerin, my Prussian army commander, realy did get killed during fire combat.
– to be continued – 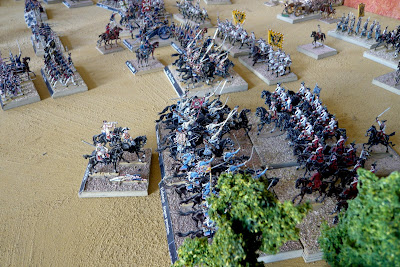 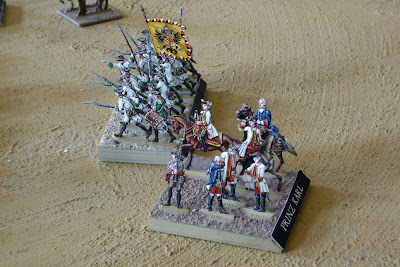 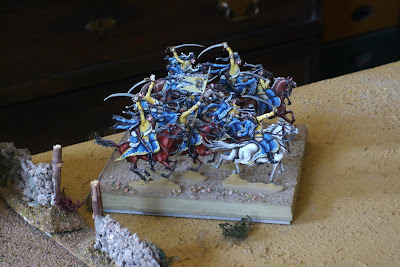 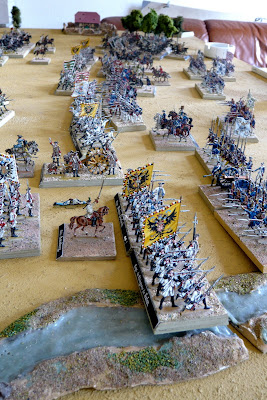 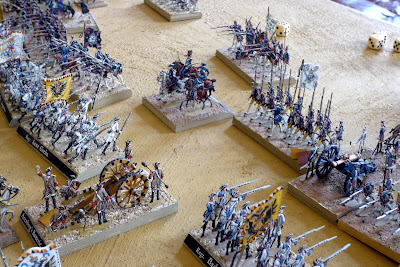