After having started to study howitzer design of the period with my first illustrated Prussian samples, I now have a better understanding which now enables me to also present the single genuine French howitzer piece fielded during the Seven Years' War.

Source regarding this design are scarce. Once more numerous bits from various records had been brought together. 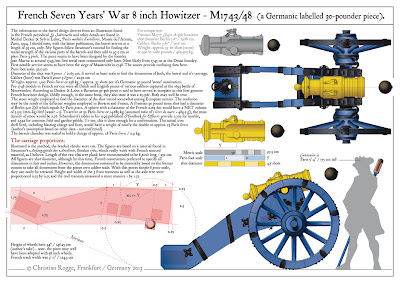 Next image shows an original 1:3 scale model of the barrel. It is attributed to the famous Swiss/French founder Jean Maritz, hand made in 1748. The piece is made of gold-plated bronze and richly decorated. The barrel comes with the button and cascabel sculpted quite similar as the Vallière 8-pounder. My draft just reproduces the non sculpted button variant.


Below contemporary draft of the carriage from Struensee's book served as general guide for my scale drawing, including its associated tutorial for dimensioning a howitzer carriage. Struensee designs a 6 shots barrel, that is longer then the French 4.5 shots piece, which, in consequence  results in slightly altered figures with my draft. He accounts for 12 inches of space from the top front edge of the bracket cheek to the front of the trunnion cut-out, while mine accounts or only 8 inches or 1 shot, for the muzzle swell of the true shorter French barrel would otherwise get jammed between the bracket cheeks. Struensee's original illustration also includes a rather major flaw as it does ignore the true angle of the carriage's trail. With his illustrated angle, the carriage would have been fitted with absurdly low wheels, since the trails lower face was in any case meant to be level with the horizon line. But apart from this, all other figures do make a good fit with other drafts for howitzers of the period. Also his illustrated carriage of the French 24-pounder cannon includes an albeit minor figure-wise deviation to its associated tutorial. 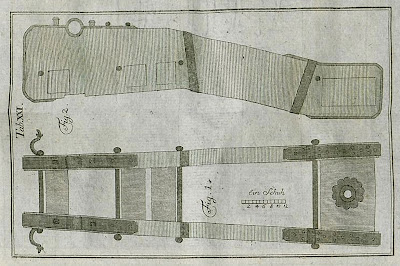 I should note that there are also other takes regarding the design of the carriage. See below illustration found in the French Esquisse Historique de l‘Artillerie Française, by A. de Moltzheim, Strasbourg 1866. 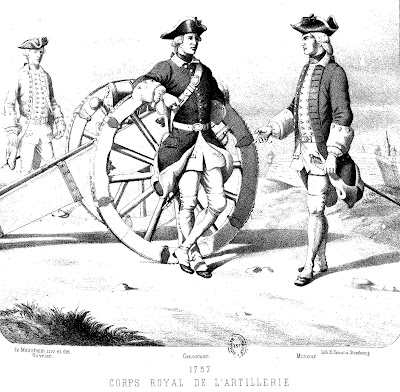 I don't know if his illustration is based on thorough research at all. Again, we cannot see the barrel. The visible bits seem to be based on a Gribeauval M1765 6-inch howitzer, really. The carriage seems to be designed with straight bracket cheeks, omitting the otherwise custom angle. Not sure here. The English contemporary John Muller, director of the London/Woolwhich arsenal and foundries, had the following to say – quoting: "It is true St. Remy, a French author, published in 1723 [sic. – read 1693], the most complete and extensive Treatise of Artillery, in two volumes in quarto, that is extant; which has since been much improved in the last Paris edition, in three volumes, published in 1745, containing all the improvements made in the artillery since the first edition… … All the authors that wrote since have done no more than copied his works in an imperfect manner, even the German authors follow him; though it is plain that the French have chiefly copied [the German] Dilichius: for their field carriages are exactly the same to this day as he has delineated them in his first work…" (John Muller, A Treatise of Artillery, London 1768, introduction pp. iii ff.).
With this German ‘Dilichius’, Muller refers to the classic work by Wilhelm Dillich or the latinized Wilhelmi Dilichii, Hochvernünfftig gegründet- und aufgerichtete, in gewisse Classen eingetheilte, bisher verschlossen gelegen, nunmehr aber eröffnete Krieges-Schule [sic.], Frankfurt 1646 (more widely read, it seems, was the 2nd edition of 1689). Dillich describes the standardized carriages first introduced by Maurice of Nassau's  Dutch at around 1620. The design was soon universally adopted across Europe and remained basically unaltered till well into the 19 hundreds.
Really, all contemporary publications concerning French artillery I know of would repeat presenting St. Remy's 1693 coppers, even the 1755 first volumes of the Encyclopédie do so. As a result, we do not know if anything essential had changed meanwhile. I have the single fragmental evidence, from the Malinowsky & Bonin source on Prussian artillery, who state Prussians introduced straight carriages from 1759 on "based on a design so much favoured by the French at this time". Two pages later, they aren't so sure anymore by stating it may have been only in 1761 or even 1766. Further information on French designs for this period should be the general direction of any further research. Possibly with period between 1760-1765 such models may have been found. Initiated by marshal Broglie, the French really undertook some measures in the attempt to lighten her cannons in order to reduce the ever growing want of draught horses. The Vallière 8- and 12-pounders were re-bored to 12- and 16-pounders, all insignia as well as the figure sculpted buttons were omitted. Also a lightened carriage was introduced for at least these converted pieces, which seem to have seen first service with the campaign of 1761 - not before this year. Oddly enough, Gribeauval's 1765 introduced new ordnance continued to be mounted on carriages with a considerable angle.