A truly spectacular new source filled with 18th century military material has been digitalized and made available online. It is the extensive encyclopedic collection of the former Wuerttemberg general Ferdinand Friedrich von Nicolai (*1730 +1814). It belongs to the archive of the Württembergische Landesbibliothek, Stuttgart – or the ‘Wuerttemberg State Library’ in English. It includes several folders on artillery with about the biggest collection of scale drawings I have ever seen. Simply overwhelming it all is. The bulk of the material should originate from the hands of the Zeugmeister or ‘Masters of Ordnance’ of the once so famous Nuermberg Arsenal, but it is also including many drafts illustrating other European Armies guns and other material. Most is of the period around 1700 – and somewhat earlier – to around 1750 or 1760. It does include awsome and most bizzare constructions, such as the one below:
The upper draft is a breech loading ‘Quick Firer’ Geschwind-Stück dated 1750 as per this sheets caption on the lower right. But I just love the sheets lower construction.
I consider to quit my present job, and start a new business selling the ‘Ultimate Mole Terminator Solution’. I'll tour all the US golf courses and turn a millionaire within short.
The frustrating part of the story, though, is the fact that only but few sheets give any information apart from foot and/or calibre scales and other measurements. No dating is found, and moreoften no information of what armies ordnance you are looking at. It is for that reason, I was told, this material has never really been employed with accademic research, so far.
Given my years of studying the subject and the countless illustrations I have done myself during the past years, I can say that I have arrived at a sharpend eye-ball, which now enables me to identify at least some of the material with considerable ease. Browsing the pages of all this fantastic material you suddenly drop on a page with the below content:
Now – That could be Prussian! – I thought. And really, the unfolded sheet disclosed a most beautiful looking draft of a Prussian 3-pounder cannon.

The sheets caption identifies it as a ‘Prussian 3-pdr battalion gun, 16 calibres or 4 feet long, and weighing 4.5 centner’. Now, what piece is it we are looking at? With all the details provided with my extensivly employed principal source on Prussian gun construction by Malinowsky & Bonin (M&B), it can be identified as Holtzmann's revised M1738 construction dating to around 1747. It should be noted that all the pencil drawn markings and notes found on this sheet were certainly done or added by a ‘Non-Prussian’. We don't know the foot scale employed here for arriving at the authors' ‘4 foot’ length. Its certainly not the Berlin Fuss. The ink drawn parts of this draft should have been done by another earlier author. This earlier authors' draft makes a rather dead-on match with all the figures and dimensions recorded in M&B, such as the widened chamber of the conic bore in order to hold a charge 0.5 the weight of its shot, rather then 1/3 with his initial 1738 master construction. The pieces principal proportions are found by dividing the barrel into 7 parts. The axis was placed into the 3/7, as with the Holtzmann designs of this range in 1738. Hotzmanns' revised 1747 design had added trunnion shoulders, it is said in M&B – and that's precisely what we see here. Also the pieces received gun sights in 1747, which are all neatly added with pencil with this illustration. Another volume of the collection even has a draft of Holtzmanns' 1747 introduced Richtmaschine. Again, despite this sheets little information, with the help of M&B, the 1747 Holtzmann construction can easily be identified.
The entire collection includes a wealth of ‘Prussian’ drafts, that may either be original Prussian, or copies of original Prussian material. A total of 5 barrel constructions, including the afore Holtzmann 3-pdr are found. Two 6-pdr designs that should be identified as the Dieskau M1754 conic chamber design, a short barrel 12-pdr, 14 calibres long, which is most obviously oncemore a Dieskau M1754 conic chamber design. I'll have investigated this one in detail. Since I have done an earlier tentative reconstruction of this piece in my below article ‘Prussian SYW Artillery scale drawings – part 3’, this one is my ‘revised’ illustration: 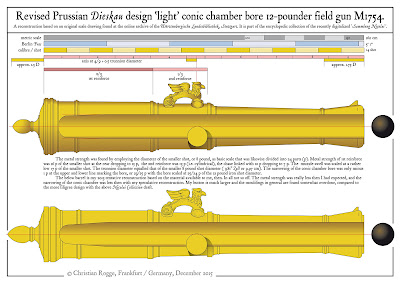 The original Nicolai Collection draft is the one seen below.
Finally, it also includes a draft of this bizarre ‘super light’ 24-pdr field gun M1744. All figures and dimensions that can be extracted from this draft leave no doubt to its identity. I have presented a tentative reconstruction in my earlier article ‘Prussian SYW Artillery scale drawings – part 2’. I will need to present a revised draft with the new information found in the Nicolai Collection material. Below see a draft of the barrel found here. It is most fantastic, for I thought I'll never manage to ever find an illustration of this piece. Oncemore, I did a closer investigation. 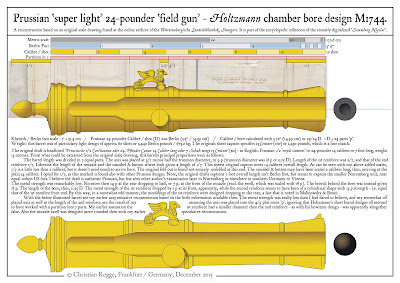 The original Nicolai Collection draft of this 24-pdr is the one seen below.
We even find a draft for the carriages bracket cheek for this piece. Very exciting this is to me.
Without doubt, this is the carriage bracket cheek for this piece. Some details provided in M&B make a good match, while some others don't. Especially the manner of the metal fittings do cause me some embarassement, for the time being. Apart from all this spectacular new material available, the collection also includes drafts of the entire Linger M1717 system providing the dimensions for the guns, as well as for the carriages and wheels and furthermore the Linger light 18-pdr howitzer along with the drafts of the Linger M1717 50-pdr mortars. The below sheet is one of three found here.
It illustrates the 3- and 6- pdr dimensions, as well as Linger's two 1717 Mortar designs. Also the small cast iron 4-pdr mortar is found here. A forerunner of the later 54 mm infantry heavy weapons light mortar, so to say.
The Prussian Linger system M1717 range howitzers are also found with another neat illustration.
The two left hand drafts I have done earlier based on drafts gathered from elsewhere. These Nicolai collection ones make a fine match. To the right you also see a so entitled ‘Swedish cast iron 16-pdr howitzer’. This piece was apparently also fielded during the period 1717 to 1740. I must confess that I did not bother to have a closer look at the cast iron ordnance of Prussia of this period, as it was almost exclusively guns for fortress armament. Obviously, this cast iron model (imported from Sweden? – hence the name?) had also been fielded.
As you can see, I need to do some more reading and engage in a closer investigation on all this new material.
By the way, the content of the entire Collection Nicolai can be found here – Link: http://digital.wlb-stuttgart.de/sammlungen/sammlungsliste/werksansicht/?no_cache=1&tx_dlf[id]=3116&tx_dlf[page]=1
Turn to the side bar on the left. All folders here are found in French language

The article will be continued…