The Battle of Saxenhausen*** 24 July 1760 – again a ‘near’ historical scenario – or the story of general ‘Leonidas’ Waldgrave’s Day of Glory.

30 December our group played once more a ‘near-historical’ battle based on the 1760 Summer Campaign in the Western Theatre of the Seven Years' War. It is the third battle scenario I generated out of the historic operations of the 1760 Summer Campaign in Lower Hessen. I called it the battle of ‘Saxenhausen’ [sic.]. It was the French attack on Ferdinand’s Allied Army encamped on the high grounds around Sachsenhausen behind a Stream named Werbe. All is based on the historic situation of 24 July of which there is more original historic material to be found further below. The Allies were found heavily entrenched behind works – the fruit of finest British field engineering, I must say. I have never made much use of field works, and as a result, had little idea how ‘strong’ such a position could be. I learned my lesson that day as ‘My French Army’ suffered about its most disastrous defeat I recall in my record of wargaming. 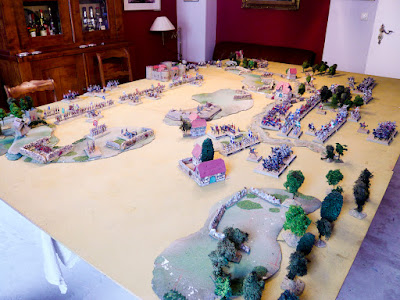 At first, lets have a look at some images of the drama suffered by the French. That day was to be a day of Glory for the Allies. 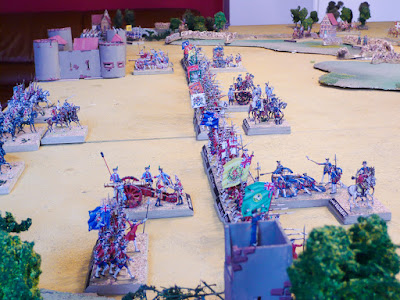 View across the Allied army deployed in front of their camp. You see the walled town of Saxenhausen in the upper left background. 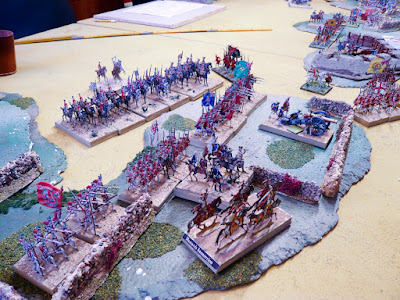 The Allies right wing moves into its defense positions. Its the division of mylord Waldgrave, with Granby's English cavalry of the right in support. 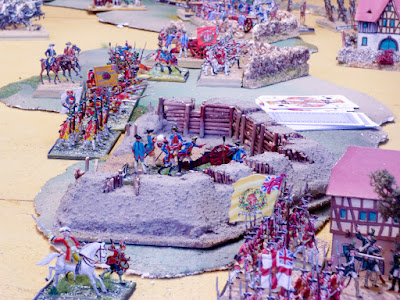 View of Allied centre grand field work, occupied by Hannoverian artillerie. This old skratch built model of mine had been reanimated to be used in game for the very first time since using Volley & Bayonet rules. Some troops you see here are only recently purchased flats of my gaming opponent M***. His cannon seen here is really a flat model. Behind are the Hannoverian Gardes (white flag) and another of M***'s regiments, that I would now identify as the 27th Inniskilling's, really. That day, they were labeled as Hannoverians by mistake. In the lower left foreground you see his command stand representing mylord ‘Leonidas’ Waldgrave. This man decided the day. His division alone knocked out about half the French army. 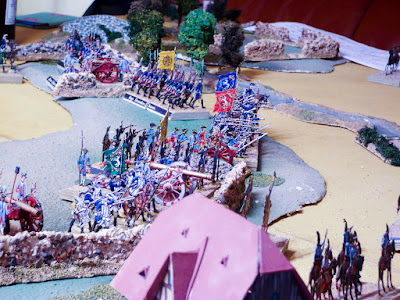 View of the Allied left with my newly painted Brunswickers commanded by general Wutginau. None of them exchanged fire with the French that day, except their artillerie. 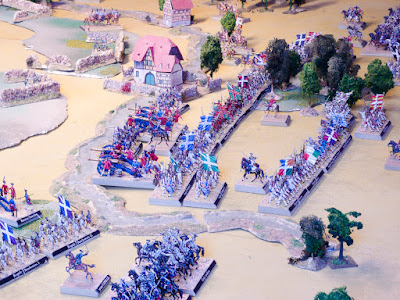 View on the centre of My doomed French. Below see a sketch of my terrain set-up as well as the Ordre de Bataille of the two opposing armies for this scenario. 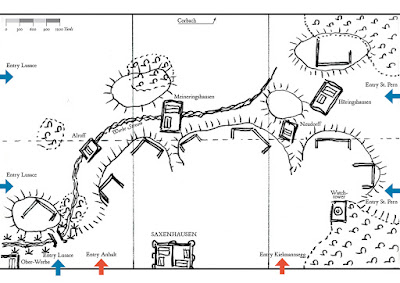 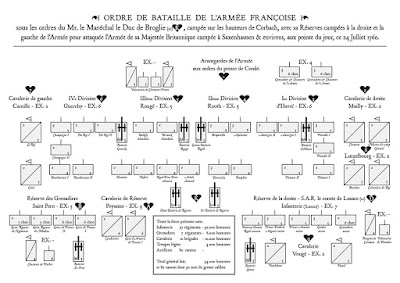 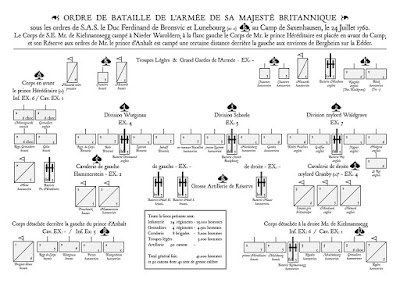 The card icons seen on my army roster sheets were needed for an alternative method of turn sequence, that I borrowed from another rule set. Testwise, we dropped the alternate turn sequence of V&B but instead adopted a card driven sequence. Each division was allocated a game card, Hearts for the French and Spades for the Allies. The sequence of turns became entirely random in the event. It was real good fun, but will need more fine-tuning. I guess we had too many cards in the game. Any concerted action by neighbouring divisions became entirely impossible. It created a lot of Fog Of War. 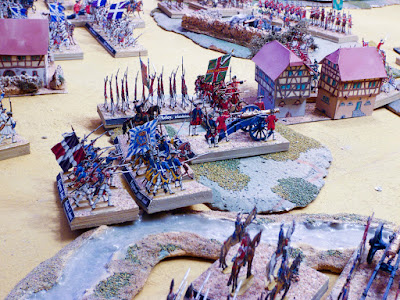 General Rougé's 3rd centre division gives it a try and prepares to attack, only to be completely shattered about two turns later. 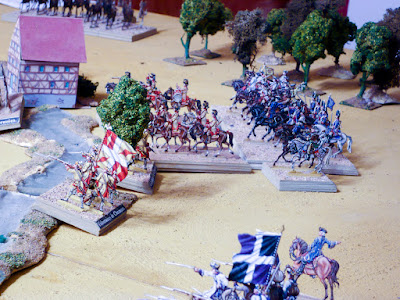 All the while French light troops – my Volontaires de Clermont – skirmished along the Werbe Stream on the French right while awaiting the arrival of Lusace's Corps de Reserve. They had some heavy cavalry in support – just to play it save. 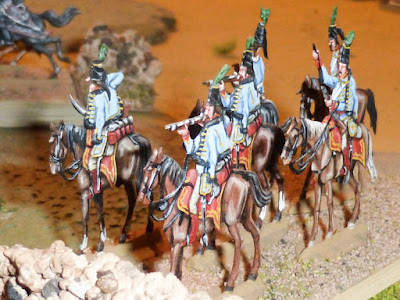 Close view of the gallant Hessian hussars which was all needed to keep those Clermont Volontaires in due distance. 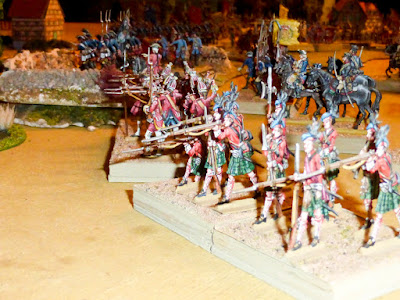 The English crack brigade on the far left under overall command of the Erbprinz. 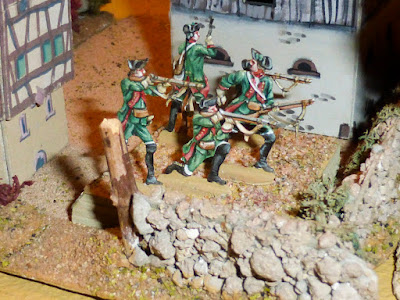 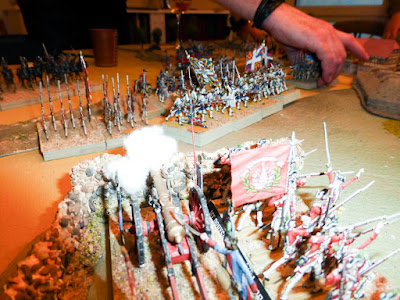 View out of a Hannoverian field work. The image tells the entire story of the French progress in the centre. As soon as the brave lads crossed the Werbe Stream, they were welcomed with about the most deadly artillerie cross fire I can think of. All French were massacred within rather short. 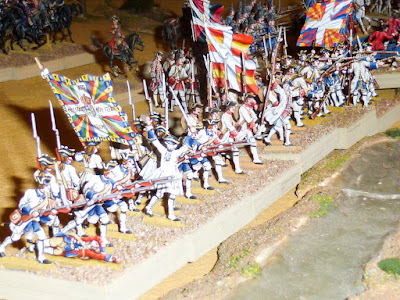 View of a most determined line of French infantry in the centre. Soon later, they were no more. 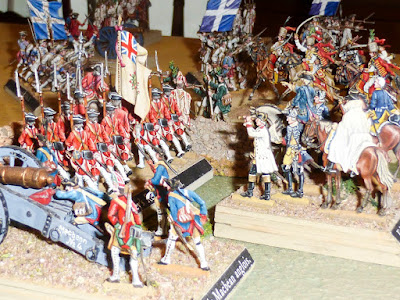 The French now launched a violent assault on the Allies right. We see Ferdinand at the right place at the right time. You see the English heavy artillerie of capt. Macbean in the foreground defending the works. 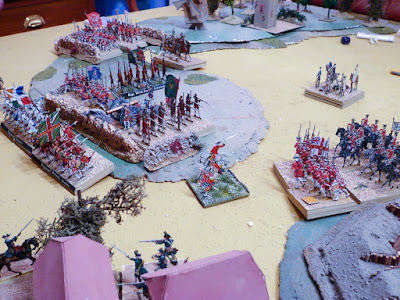 View of the French assault of the English field work on the Allies right. The Irish really managed to knock out Macbean's heavy batterie – one of the rare successful French attacks that day. Moreoften we simply could not make an impression. The crisis on the Allied side now eveolved as St. Pern's Grenadier Reserve – by approaching along the unguarded ‘goat trail’ – attacked into the Allies undefended flank. HAH. 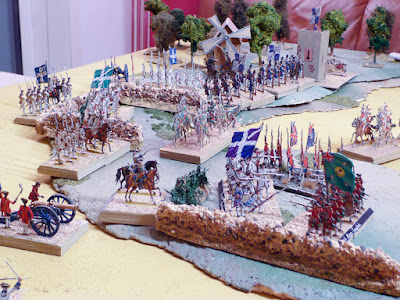 For a short period, the French really seemed to crush the Allies right, taking two of their works and hoisting the colours of the French king on Watchtower Hill. But not for long. In came Waldegraves violent counterstrike supported by the only now arriving reenforcements of general Kielmannsegg. No one would pass ‘Leonidas Spartan’ English division that day. Supported by a number of smart timed and well directed charges of the English cavalry, all French gains were lost within a rather short span of time. VICTORIA to the arms of Sa Majesté, le Roi d'Angleterre. P.S.: If this serries of sucesses of the Allies continues, my French Parisienne gossipers will fall short of finding proper nicknames for Homer's Allied Heros. 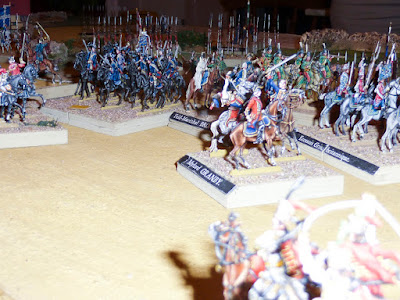 Now leaving the realm of fiction and turning to the true historic background
My scenario concentrated on a hypothetical clash of the two Armies principal forces supported by its immediate neighbouring forces on either flank. The situation is illustrated with the below sketch. 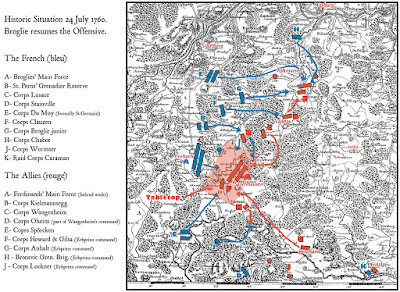 Historically, Broglie engaged Ferdinand’s Army at Sachsenhausen in a feint attack that day, in order to tie as many of Ferdinand’s force, while the real attack operations were directed simultaneously to Ferdinand’s flanks at Volkmarsen in the north and the Eder River between Waldeck and Fritzlar to the south. I thought, the French numerical superiority was fine enough to alter Broglie’s rather elegant plan and make him take the bull by the horns instead. Sure this was to become a bloody affair. Broglie's plan wasn't so bad – certainly much wiser then my somewhat dashy all out attack. Yeah guys… all my fault, I must confess. The official French campaign journal made the following assessment of the situation: On passait le temps aux camps de Corbach & de Saxenhausen, à s'observer réciproquement, les Ennemies avait retranché le leur, & ils ne paraît pas le devoir quitter de sitôt. D'ailleurs on n'aurait pas pu les en faire sortir de vive force sans se résoudre à perdre infiniment de monde.
While I was arranging My Scenario’s Armies and terrain set-up, I also took the effort to research the whereabouts of all other troops. 24 July was really a very busy day for the entire French army. Everybody was on the move. It was the result of some excellent staff work, I should say. I’m not aware the Austrians ever managed to launch anything at this scale without half the army being delayed or getting lost (the somewhat screwed Hochkirch and Liegnitz operations pop up in my mind here). The gentlemen from the Department of Military History of the German Great Generalstaff entitled such sort of operations as ‘Rococo Warfare In Perfection’ – but in a rather disparaging way (see vol. 12 pp. 270 ff.). They rejected the sort of operations where the light troops did all the work, while the bulk of the line remanied behind watching their progress as mere spectators with arms grounded. But, Broglie archieved his objective. A win. It was bloodshed enough. Several hundred got killed that day and a rather pressing pursuit during the next two days caused a many more casualties. Namely the comte de Broglies clash with Spörcken's Arriergarde around Viesebeck July 25 (about half way between Volkmarsen and Wolfhagen) were the roughnecks of de Vair's Volontaires got badly mauled by the mounted elements of the Legion Britannique and the sabers of the Black Carabiniers under major Monckewitz. About 800 men killed only here in a mater of a few hours on both sides.
I decided to have a very close look at the operation in its entirety. It provides the material for even more good games.

Below find the detailed breakdown for the entire Allied Army July 24 with an original record provided the Paris Archive at the Château Vincennes. The manuscript is easy enough to read, so I did not bother to do a transcription. Note the dispositions recorded here should be the situation in the afternoon 24 July. The Corps Kielmannsegg is now found encamped much closer to Ferdinands Main Force.
Also Wangenheim and Oheim are now both found encamped at Freienhagen behind Ferdinands right wing. By dawn 24 July, Kielmannsegg was located at Ober- and Nieder-Waroldern, Oheim with all the Hessian troops was in Landau, and Wangenheim with the Hannoverians was in Volkardingshausen to Kielmannseggs close support. The sheet showing the line-up of Ferdinands Sachsenhausen camp is incomplete. The generals are missing. Possibly, the author's desk got smashed by a French cannon ball leaving the poor man so shell shocked that he could not complete his work. 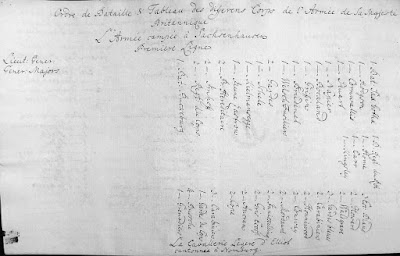 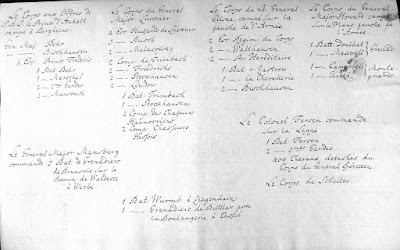 Disposition of Broglie’s French Army
A- Broglies' Main Force
left with 49 bats, 73 esc, artillerie
B- Corps St. Pern
brigade Grenadiers de France, plus one unknown inf. brigade (La Marck? or possibly Alsace from Du Muy's Corps), & several mixed detachments of the army.
Also encamped here around Bernsdorf and Mühlhausen but not part of Saint Pern’s force for the 24 July attack operation was la brigade des Gardes and the Grenadiers Royaux. Possibly also the cavalry brigade Royal of the Army’s left wing cavalry.
C- Corps Lusace
approx. 18 bats & 26 esc, artillerie
D- Corps Stainville
principal forces: 2 regts of dragoons (du Roy & Feronnaye), Bercheny hussars, Légion Royale
E- Corps Du Muy (formally St. Germain)
approx. 34 bats, 24 esc, artillerie
F- Corps baron de Clauzen
Inf brigade Royal-Suédois & several mixed detachments of the army, artillerie
G- Corps comte de Broglie (the Maréchal's brother)
Inf. brigades Belzunce & Swiss Castellas, cav. brigade Orléans, 2 regts of dragoons (Beuffremont & Apchon), Volontaires de Flande, & Volontaires de Vair, artillerie
H- Corps Chabot
2 regts of dragoons (Royal & Thianges), Turpin hussars incl. attached Chasseurs, Fischer Corps, Volontaires de Dauphiné & d'Austrasie, also some artillerie from Du Muy's Corps (?)
J- Corps Wurmser
Royal Nassau hussars & mixed detachement of infantry
K- Corps Caraman
2 regts of dragoons (Caraman & Orléans)
The basis for the composition of all troops remains the general Ordre de Bataille of June 1760. I have included the sheets once more further below. A number of troops had been employed guarding the French communications to Frankenberg and Margurg in the rear, or as garrison of these places. It included the regt. Boullion, the remains of the brigade d'Anhalt that had been shattered at Emsdorf, and possibly some others more. All were under the command of Stainville, but did not take part in the 24 July attack operation, to my understanding. Furthermore, the Volontaires de Clermont as well as a detachment of the Bercheny hussars along with this regiments associated Chasseurs d'Origny were operating along the Diemel River and probing into the direction of Paderborn in Westphalia at that time.
Note: Interesting is the French use of its dragoons here. You see them exclusively employed as light troops. None served with the cavalry wings of the Army. Really, they do the same service as the hussars did with the Austrians or Prussians. 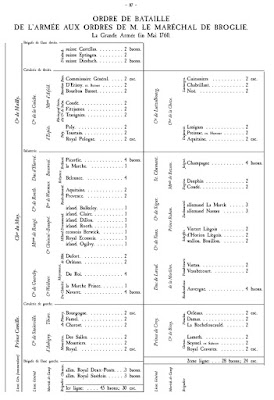 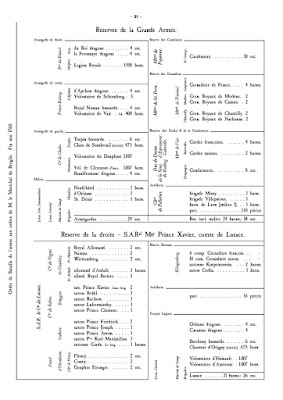 Labels: My 1760 French vs Allies "Near Battles" being fought